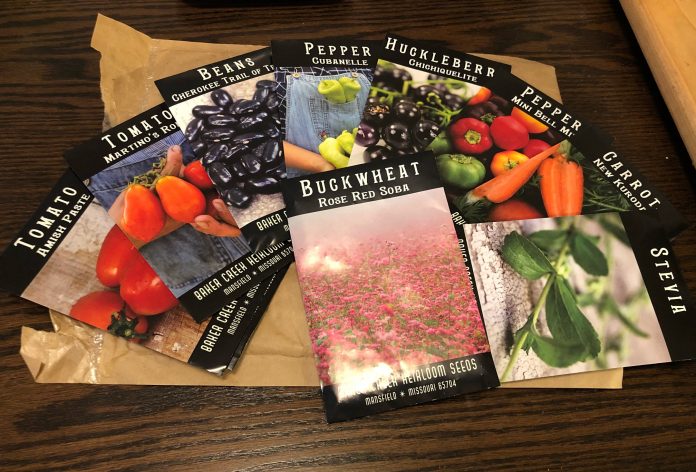 Now that the holiday rush has disappeared into the rear view mirror, it’s time to start thinking about spring things. Garden seeds are already flying off the shelves, and at least one online retailer of heirloom seeds is on its second “pause” in a month in order to catch up on shipping existing orders before accepting more.

Yep – it’s looking like Pandemic Gardening Part Deux is in the works for many people  – as it is for me.

Where do you get seeds, besides the store or online? If you have to ask, then I have to wonder what you did with the “guts” of your Halloween pumpkin? How about the butternut squash you served for Thanksgiving? Did you eat all the seeds from that “organic” tomato you bought at the whole paycheck store? Where do you spit those pesky things when you’re eating your summer watermelon?

Have you even thought about what you do with fruit and vegetable seeds before? If not, I’m going to present you with a few reasons that you should  start paying attention – especially if you want to be a “prepper” or just more frugal with your money.

Seed saving has been a human activity for at least ten thousand years. Early humans couldn’t just order a packet of seeds from Amazon. They started with wild seeds, and then as they domesticated these plants they carefully hoarded and saved seeds from one growing season to the next. It was necessary to preserve them from rot or mold or being eaten by animals over the winter – so that they could start next year’s crop in the spring. This was a vitally important activity – if you lost your seeds your entire clan could potentially starve.

Colonists, immigrants, and native tribes have all carried their favored seeds along with them when they pulled up stakes and moved to new territory – whether the move was voluntary or not. That’s partly why we have such wide genetic diversity of edible crops available to us now. But even so, that diversity is only a small subset of what “used” to exist.

People of the more recent generations – the ones who lived through the Great Depression or who cultivated Victory Gardens in WWII – had especially adept green thumbs by necessity. Some took seed saving to a new level. In fact if you ask around you may find you have friends and neighbors who still have seeds from their grandfather’s favorite tomato variety or their great aunt’s snap beans. That’s how you end up with heirloom varieties. If you are really nice to those folks they may even share a few of those precious seeds and give you pointers on how to grow and save them.

Unlike our ancestors, we have the internet for guidance. I needed information, so for reference I perused sites such as:

You also shouldn’t overlook your state/county agricultural extension service for good information that is specific to your growing region.

There are three main reasons to save seeds from your produce – Replanting, Human Consumption, and Animal Consumption.

Seed saving for replanting may be just a fun experiment now, but in the event of a societal collapse (or even just a serious economic depression) seeds may become unavailable or priced out of your range. Seed saving is virtually free and ensures you’ll at least have “something” to plant if events beyond your control go south. Kinda like last spring when suddenly everyone was planting a pandemic garden and retailers were quickly stripped of seed stock.

Beware hybrids that won’t breed true though. Because hybrids are a “blend” of genetic types, the seeds produced (the offspring) won’t necessarily have the exact characteristics of the parent plant – they may favor the grandparent plant instead.  If you want to be sure that your seeds produce the exact plant you grew this year, you need an heirloom “open-pollinated” variety rather than a hybrid.

Thus, before you save the seeds you may have to do a bit of research to know whether that supermarket tomato is a hybrid or not. The same is true for farmer’s market produce. The farmer may be quite willing to talk your ear off about the produce they grow though, so consider them a possible learning resource.

The other thing to beware of with supermarket produce is that these varieties have been bred and selected to withstand machine picking and shipping, and be “pretty” – but not necessarily for their flavor or suitability for a home garden or even for your geographic area. So even if they aren’t hybrids these may not be your best choices for seed saving long term. If you want to try it just to get started or it’s your only option then have at it, but there may be better options for the long term.

If you have the wherewithal to buy seeds, it may pay you to look into heirloom seed companies. They often have varieties for almost every growing zone niche. These varieties are tasty and interesting but are just not profitable enough or practical for factory farms to grow for various reasons. Two good places to start for that are Baker Creek and Seed Savers, but there are many others. Once you have your heirlooms planted, then you can save your seeds from those and you may never have to buy seeds again.

As an FYI – Baker Creek is currently experiencing demand five times larger than this time last year and are struggling to keep up with orders. So plan accordingly. The pandemic seed rush isn’t over.

Replanting is not the only reason to save seeds. In many cases you’ll have way more seeds than you need to plant next year and can use them as an additional food source. Pumpkins and butternut squashes are good examples of this. Many of these seeds are good for consumption by both humans and animals.

Unfortunately with corn, the part we eat IS the seed, so you will have to sacrifice some ears for your seed-saving project. The other problem is that a lot of the sweet corn varieties out there are hybrids, so they are great for eating fresh off the cob, but for seed-saving, not so much.

I’ll be trying a second raised bed of “three sisters” this year, so I’ll probably do one plot for eating and one plot for saving. I’m still learning about all the different corn varieties and and their uses, so you’ll have to do some of your own corn research too. Or – throw caution to the wind and just plant something and see what happens. Sometimes experience is the best teacher!

Larger seeds such as those of winter squashes can be roasted and eaten as is. Many people dress them up with various spices as well for a crunchy fall/winter treat. They are high in protein, potassium, and vitamin A.

Some seeds can also be ground for use as a wheat flour substitute. I recently tried this with pumpkin seeds, and the results weren’t too bad.

Although I don’t have any personal problems with gluten I do have a muffin recipe that uses exclusively buckwheat flour, just because I like it. For this recipe the diminished rise and lack of gluten was already accounted for so I thought it would be a good candidate with which to try out my pumpkin seed “flour”, and it worked!

Speaking of buckwheat, I found some buckwheat seeds which have pretty pink flowers, so I may try to sow some of those on a patch of embankment at the edge of my yard. Buckwheat isn’t actually wheat – it’s a seed that you can grind and eat like flour. If it works, it should be a pretty ground cover and I may be able to harvest a few handfuls of actual buckwheat from it. We’ll see. I’m really working on having not just a garden, but a “yardstead”, and buckwheat would be another step in that direction.

One of the easiest ways to utilize your saved seeds from larger veggies such as butternut squash or pumpkin or even sunflowers (if you don’t want to plant them or eat them) is to simply use them as bird food. I’ve done that several times this year with satisfying results.

I looked up the information from the Audubon Society, and created a concoction of peanut butter, cornmeal that was getting old, and the cleaned and air-dried squash and pumpkin seeds.

I pressed the mixture into some old plastic fruit cups that I saved (I am not a hoarder), then unmolded and froze my new birdie treats.

I’ve been adding these to the regular food at the feeder at the rate of one or two a week since Thanksgiving. These treat cups seem to be second in popularity only to the the meal worm blocks. I suppose that’s due to the protein and fat content for the winter. It’s fun to watch the backyard residents pecking away at something I made myself.

I decided that I’m going to grow sunflowers this year to help save on birdseed as well. According to the internet, saving and drying sunflower seeds – either for human or bird consumption – isn’t difficult, so I’m going to give that a whirl too.

So bottom line – seeds are an investment in our nutritional future. If you’re planning a garden this year you’d better get on the stick and get your order in. Unless you are already ahead of me and are an heirloom seed saver from way back. But even if you’re not, all is not lost. Look at the produce you already have and see what DNA-packed goodies may lie just beneath the surface of that vegetable – just waiting for some soil and sun and a little TLC.