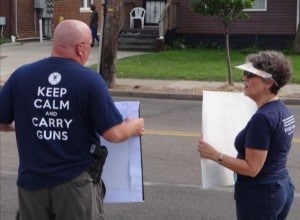 Advocates on both sides of the issue of gun violence took to the streets of Akron, Ohio, last weekend with two different versions of the event. (Photo: Twitter)

After hearing that five gun control groups were planning a rally, Ohio Carry decided to make some signs and hold a public event of its own, with a surprising result.

A number of regional anti-gun groups, including a local chapter of Moms Demand Action for Gun Sense, advertised the event staged in Akron on Sunday afternoon. With a turnout of about a dozen protesters, the demonstrators were met by a larger crowd composed of members of gun advocacy group Ohio Carry and its sister organization Moms Take Action.

“We had a total of 32 people come to support us with only two days notice. The anti gun side had only 12 people show up, even though they had five groups sponsoring, and two months notice,” said Brett Pucillo, the president of Ohio Carry, said in a prepared statement sent to Guns.com.

Pucillo stresses he wants to clear up any misconception that the counter-rally by the gun rights groups was an open carry event.

“A number of people at the event did choose to open carry, as they do every day. A number also chose to conceal and there were some who chose not to carry at all. They were there to support us and to hold posters and spread education,” stated the gun group organizer.

Those involved on the gun control side, however, have a different version of the event.

Local activists Demanda Evers and pastor Kristine Eggert tweeted a series of posts across social media that garnered attention from the blog Liberaland.com and media outlet Raw Story that would seem to imply the gun control advocates were bullied.

“Why do these armed men insist on going into areas where they are not wanted or needed? All we have to do for gun sense laws to be implemented is to sit back and continue to let them be their own worst enemies,” Liberaland bloggers said.

To the allegations of bullying, Pucillo responded, “There have been numerous news articles recently regarding a counter rally event that Ohio Carry and Moms Take Action organized in response to a slew of groups protesting in the Akron area. While most have been twisted to fit an anti gun narrative, the lies range from accidental or uniformed, to downright hurtful.”

Pucillo argues that his group staged its counter-protest away from the gun control gathering for the first hour and only moved across the street to the corner opposite of the gathering to be able to talk to those stopping at the intersection. He states it was members of the gun control groups that initiated the interaction between the two partisan assemblies.

“We were cussed at multiple times, had people run over to get in our faces and block what we were doing, and laughed at and mocked by the anti gun crowd. Numerous times curse words were shouted at us even though we had young children with us,” Pucillo said.

Pucillo explained his group remained calm and tried to interact with the public, making new friends. “We asked everyone we talked to just to keep an open mind, read the facts, and come to an informed decision on their own,” he said.

This is not the first time that gun rights advocates have staged counter demonstrations at events put on by gun control groups. Last summer some 30 protestors from pro-Second Amendment groups crashed a rally in Missoula, Montana, staged by former New York Mayor Michael Bloomberg’s Mayors Against Illegal Guns organization. Prior to that, a Moms Demand Action protest in front of the Indianapolis Capitol was met with a counter protest of gun rights supporters openly carrying side arms and sporting rifles. A member of Moms Demand Action attending that event said she felt unsettled by their presence and organizers would have to think twice before holding another protest, particularly one where children could be present.

While Moms Demand Action declined to make comment regarding the Akron event to Guns.com, an attendee from the rally did go on the record.

“Strangers carrying guns, whether they are open carry activists or anyone else, shouldn’t be surprised when their efforts at conversation are unwelcome, rebuffed, or unpleasant,” Eggert said in an email.

Ohio Carry and Moms Take Action Footage of the event: