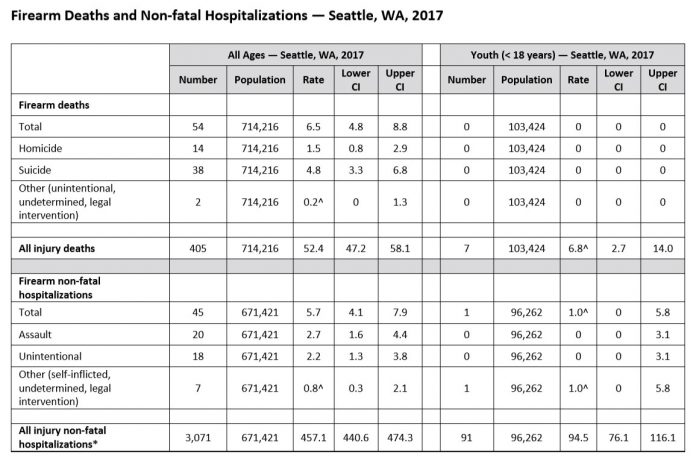 Washington, and Seattle especially, deep dove into the gun control rabbit hole last year. One of the most public facing laws was Seattle’s ‘Safe Storage’ requirement. The 2018 law was supposed to stop children from accessing firearms and hurting themselves or others. A noble goal to be sure but… like the chart above shows. It doesn’t look like it was a problem.

Kids (of course it’s the kids) that this sweeping rule and accompanying fines and convictions for noncompliance were protecting didn’t have any 2017 deaths, remember this was passed July 2018. And only 1 injury of a minor was recorded. So why was this needed?

What was the safe storage law?

Seattle residents face penalties if they do not safely store their firearms or report lost and stolen guns.

A safe, gun safe, gun case, gun cabinet, or lock box is required to have and/or be.

(a) designed to fully contain firearms and prevent removal of, and access to, the enclosed
firearm;
(b) Is capable of repeated use;
(c) May be opened only by a numerical combination consisting of the entry of at least three
variables entered in a specific sequence on a keypad, dial or tumbler device; key,
magnetic key, or electronic key; or by biometric identification; and
(d) Be constructed with such quality of workmanship and material that it may not be easily
pried open, removed, or otherwise defeated by the use of common tools.

The reports are still coming in, and will be for awhile, despite a numbers reporting requirement in the law that was very poorly designed with the lag in data collection. That is where these numbers come from. It will be very interesting in a year when we have numbers to compare these to. Again, these are pre law numbers. So this was the ‘dangerous’ Seattle that needed a safe storage law threatening residents with thousands of dollars in punitive fines.

My favorite bit is the fact that you automatically become guilty of the crime of improper storage if you get sued civilly, you then have to win the suit and prove you weren’t negligent instead of the state proving you were.