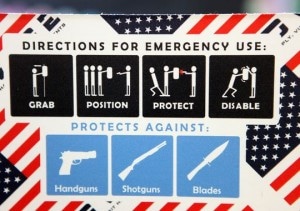 The Colonial School District located in New Castle, Delaware received a truckload of donated ballistically reinforced whiteboards as part of a pilot program in an attempt to increase security.

The boards, manufactured by Maryland-based Hardwire LLC, were paid for through donations from Delmarva Power, the Delaware City Refining Company and Monroe Energy. As such, the boards, which cost sell for $400 apiece, cost the school nothing.

The boards, designated for Gunning Bedford Middle School and Pleasantville Elementary, come in different models with staff at the front desk of the school being issued thicker boards able to withstand fire from heavier weapons.

“Hopefully it will never get used,” Tanya Aviola, a guidance counselor told the Delaware News Journal. “I think it makes us feel a little safer, like, we have something for us to defend ourselves in case something horrible happens.”

The 18″ x 20″ boards are part of a pilot program that aims to place them at schools across the state.

Delaware is not the inaugural use of the Hardwire boards, with customers in Maryland  and Minnesota adopting the devices last year.

However not all are relieved by the planned use of the portable armor.

“Having survived being shot at, there’s a lot of difference between a theoretical concept and a real live attack when someone is trying to kill you,” said Michael Dorn, executive director of Safe Havens International, a non-profit campus safety organization. “I personally wouldn’t bet my safety on this.”