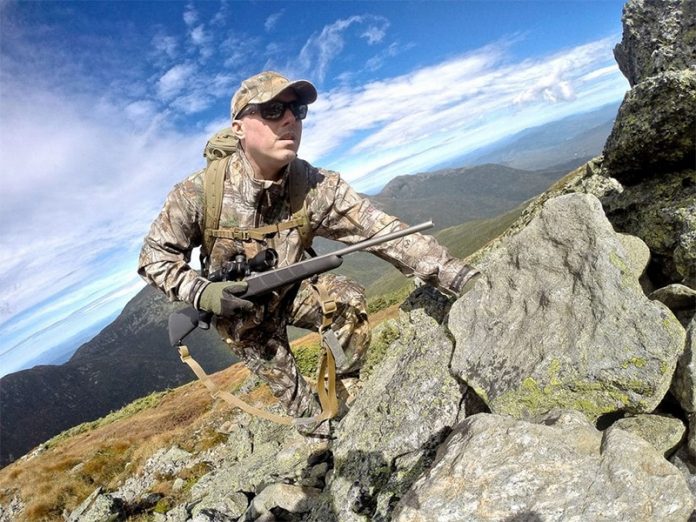 It’s that time of year when we start laying out all of our hunting gear. If you are like most you are probably looking it all over in your shed and half dreading the day when you have to load it all up on your back. With a tree stand, equipment and hopefully a trophy buck to haul out, how much weight do you really need in your rifle? Most pistol hunters have come to this conclusion when they bought that magnum caliber revolver. Certainly a viable solution, however it doesn’t do you much good when a 250 yard opportunity presents itself . . . neither does a rifle that is stripped of vital features just to save a few pounds. Savage understands this and now brings us the Lightweight Hunter.

The new reduced weight rifle is designed around two goals:

After some informal test shooting at the 2016 SHOT Media Day, we requested two sample rifles and Savage did not disappoint. The Massachusetts rifle maker put out two versions of this masterpiece, the 16 and the 116. The difference is simply action length. Following Savage’s usual nomenclature system the 16 is the short action version while the extra “1” designates its bigger brother. The short action is available in .223 Rem., .243 Win., .270 Win., .308 Win., 6.5 Creedmoor and 7mm-08 Rem. The 116 is available in .270 Win. for long-action fans.  All are priced at $752.

The first one to hit the On Target office was the short-action .308 Win. and yours truly was shipped one in 7mm-08 Rem. Picking up the shipping box it was evident that they met their first objective. At just 5.65 pounds I had to make sure it wasn’t just a hard case in the box. The footprint of the rifle was quite compact as well, with an overall length of just 40.25”.  The rifle comes with a 20” barrel set in a sturdy synthetic stock, and all metal parts are machined from matte-finished stainless steel. The new rifle makes use of some tried and true Savage parts, such as their floating bolt head, three position safety and of course the Accutrigger.

If this is going to be your first Savage rifle knowing, the importance of these features is critical. Let’s start with the floating bolt head. On your average hunting rifle once the bolt is closed the surface for which your case will be forced against during firing is set  in relation to the locking surface, think of this as your launch pad and your case and bullet as a rocket. If your launch pad is tilted then your rocket is not going to fly straight. This has always been a major determining factor of accuracy. In the past the only solution was to send the rifle to a gunsmith and have these surfaces hand lapped and “trued” to provide the ideal 90 degree angle. The only problem is that hand lapping is tedious work and the process may cost you more than the rifle itself. Savage addressed this by allowing the bolt head to move slightly during firing. This movement self centers the cartridge and creates an optimal touch off surface each and every time, right out of the box!

If you have been living under a rock and haven’t heard of the Accutrigger, then you are in for a major upgrade in the bang switch area. The Accutrigger is the feature that put Savage rifles on the map. Imagine a user adjustable trigger that can be set to as light as 6 ounces in some models, yet survives the drop test AND has zero creep. I fell in love with this feature on my very first Savage rifle back in 2003. Utilizing our Lyman Digital trigger pull scale (lymanproducts.com, $74.99) we measured a range of 5 lbs. 7 oz. all the way down to 3 lbs. 6 oz.

Lastly the 3 position safety gives you the flexibility of opening and closing your bolt while still blocking the trigger from movement. This allows you to load, unload and change ammo while keeping the rifle safe. For the hunter who may be out during cross seasons this allows you to safely change loads should another species present itself.

The rifle was obviously made to shave every ounce possible. I really liked how this was accomplished with aesthetics in mind. The horizontal cuts along the receiver take weight off without compromising rigidity and the spiral fluting on the bolt makes for one very sexy firearm. One might argue further fluting on the barrel would have fit the motif, however, the use of a pencil thin contoured barrel didn’t really call for it. Using the plain barrel helps shave off something else that is just as important: price. At just $754, this specialty hunting rifle is well within reach of most moderate budgets.

The Lightweight Hunter comes drilled and tapped for your favorite bases. For our 7mm-08 test rifle, we put on some simple, inexpensive Weaver mounts and then topped them off with the new Nightforce 3-10x42mm SHV riflescope (nightforceoptics.com) mounted in a pair of Nightforce X-Treme Duty Ultralight 30mm rings. In terms of value, the Nightforce SHV closely parallels the Savage’s bang for the buck, giving top-quality optics, features and killer reticle options without the premium price. Our SHV was equipped with the IHR (International Hunting Reticle) reticle, which present a lightning-quick, uncluttered sight picture for those time-sensitive shots.

With the rifle came two different types of Federal Vital Shock ammo. Both were loaded with 140-gr. Nosler bullets, one being their classic Partition and one being their newer Ballistic Tip. We conducted group therapy at 100 yards as we do with most of our rifles. Shots were fired from a bench with the use of “The Rock” shooting rest by Caldwell shooting supplies (btibrands.com, $110). Accuracy was outstanding, not just for a lightweight rifle, but for ANY production rifle. Almost all groups came in under an inch with both types of ammo, but the Partition was the star of the show with its smallest group measuring just 0.966”.  Firing the rifle offhand with just a sling proved to be a breeze. The light weight of this rifle made it very easy to keep all of our shots in the “pie plate” on our target.

When it comes to maintenance nothing is simpler than a bolt action. Disassembly is effortless. Once you are sure it is unloaded all that’s required to remove the bolt is to hold the trigger down and press the bolt release located in front of the trigger guard. It slides right out and can be cleaned effortlessly from the breech to muzzle. We cleaned our rifle with Hoppe’s new foaming bore cleaner (midwayusa.com, $11.99). I have always been a fan of this style of solution as it soaks the top of the bore as well. Liquid cleaners run down to the bottom half of the bore and then eventually out of it once gravity performs its magic.

This is certainly a go to gun for those who want to take their hunt further into the woods, or are looking to make a much more accurate offhand shot. See it at you gun shop, or for more information contact Savage Arms; Tel.: (800) 370-0708; Web: www.savagearms.com