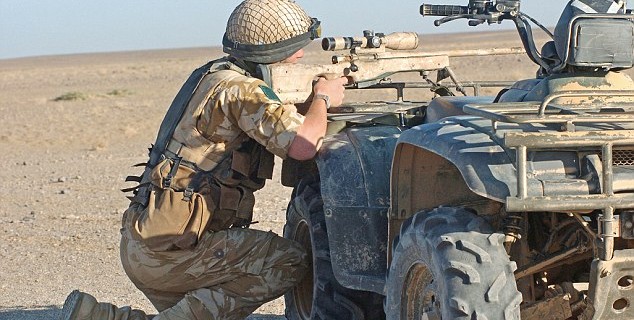 According to DailyMail, SAS troops with sniper rifles and heavy machine guns have killed hundreds of Islamic State extremists in a series of deadly quad-bike ambushes inside Iraq, The Mail on Sunday can reveal. Defence sources indicated last night that soldiers from the elite fighting unit have eliminated ‘up to eight terrorists per day’ in the daring raids, carried out during the past four weeks.

Targets are identified by drones operated either from an SAS base or by the soldiers themselves on the ground, who use smaller devices. The troops are also equipped with quad bikes – four-wheeled all-terrain vehicles that can have machine guns bolted on to a frame. They then seek out IS units and attack the terrorists using the element of surprise and under the cover of darkness.

The missions have taken place on a near daily basis in the past four weeks and the SAS soldiers have expended so much ammunition that regimental quartermasters have been forced to order a full replenishment of stocks of machine-gun rounds and sniper bullets. An SAS source said: ‘Our tactics are putting the fear of God into IS as they don’t know where we’re going to strike next and there’s frankly nothing they can do to stop us.

‘We’re degrading their morale. They can run and hide if they see planes in the sky but they can’t see or hear us. Using so many snipers takes the fear factor to another level too; the terrorists don’t know what’s happening. They just see their colleagues lying dead in the sand.’

The SAS’s guerrilla-style raids are targeting IS’s main supply routes across western Iraq and vehicle checkpoints set up by the terrorists to conduct kidnappings and extort money from local drivers. The operations start with SAS commanders studying hours of footage of potential target sites recorded by drones – Unmanned Aerial Vehicles (UAVs) – and listening to enemy communication intercepts in a bid to identify IS leaders.

Once the regiment’s senior officers have identified a target, the soldiers gather to receive their operational orders. They then leave their secret base and climb aboard a fleet of helicopters – with the quad bikes already safely secured in the cargo hold. As the SAS soldiers strap themselves into their seats, the pilots tap in the co-ordinates for the area of desert where the Chinook will land.

As the helicopters’ engines are so loud, the Chinooks take the SAS soldiers to a laying-up point as far as 50 miles from the target. The troops disembark aboard the quad bikes and prepare their general- purpose machine guns (GPMGs) and Barrett sniper rifles.

If this information is accurate this is the first time since Islamic State emerged that one western special unit like SAS is directly involved in fight with ISIS in Iraq or Syria.