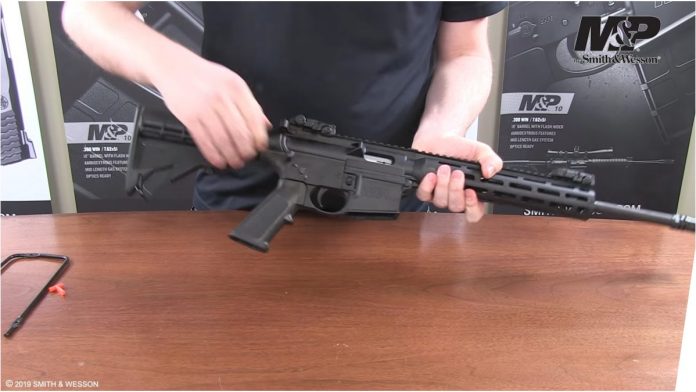 Smith & Wesson has issued a consumer alert for all models of M&P15-22 rifles and pistols made before Feb. 1, 2019. The alert and inspection process outlined by Smith & Wesson comes after two recently produced M&P15-22s were found to have their breech face counter bore depth out of spec. The condition could allow the bolt “upon closing, to crush the rim of the case, causing the round to fire, cycling the bolt, and potentially resulting in multiple discharges without depressing the trigger.”

The following scenarios could cause such an incident:

1) With a loaded magazine in the firearm and the bolt locked to the rear, depressing the bolt release to allow the bolt to drop freely may ignite the round as the bolt closes without engaging the trigger and with the safety selector in either the safe or the fire position, and may also result in multiple discharges.

2) With a loaded magazine in the firearm, bolt in the closed position and a round in the chamber and the safety selector in the fire position, depressing the trigger will cause the round to fire normally, however as the bolt cycles, the next round may be ignited by the bolt crushing the rim of the case as it closes, causing multiple discharges.

The Massachusetts-based company thinks the firearms identified are isolated incidents but warns any unintended discharge of a firearm could cause injury. In response, Smith is asking customers to check to see if their bolt is within specification and to “refrain from using their M&P15-22 until the bolt has been inspected and replaced as necessary.”

Smith & Wesson will send those with affected serial numbers a free M&P 15-22 Bolt Inspection Gauge on request to test their firearm. If the bolt doesn’t pass, then it must be sent to Smith & Wesson for a free replacement.