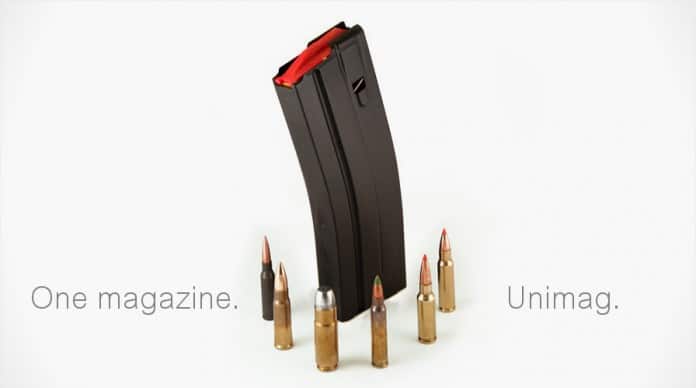 Ross & Zheng Engineering is now taking pre-orders for their groundbreaking Unimag, an AR-15 magazine that is truly multi-caliber, capable of loading and feeding a wide variety of AR-15 cartridges.

From the outside it looks like a GI-style AR magazine, nothing particularly special, but inside, it has a two-piece follower. The top part of the polymer follower is articulated, and will angle to meet the taper of the cases loaded. At the same time, the lower piece of the follower matches the curve of the magazine to prevent tilt.

The company is taking pre-orders at $49 per magazine. It’s a steep price but they’re just starting up and realistically, there’s nothing else like this on the market.

Magazines are no small expense for multi-cartridge shooters and if the Unimag can do the job of five other magazines than it’s going to save money in the long run.

The pre-order period will run from now until September 20, with the first magazines shipping September 28. Anyone who places a pre-order will receive a coupon for 10 percent off one more magazine after they go into production.

RZE is also looking for OEM partners to do business with. If these magazines are as reliable and flexible as they are in the demo videos then they will be no doubt be popular with gun builders as well as shooters.

“It worked well for me,” said Oleg Volk in his brief hands-on preview. If these pan out, they will change the AR landscape.