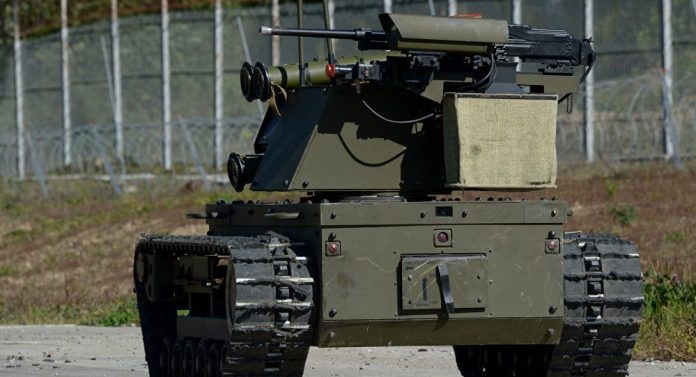 For the first time, in modern wars, Russian-made military robots were sent to fight on the battlefield. The Syrian armed forces, backed up by the Russian military robots, successfully retaken the strategic height of 754.5 located in the province of Latakia.

The initial phase of the attack on the height 754.5 involved six Russia-made robotic systems designated as Platform-M and four sets of robotic systems designated as Argo. The robots were supported by the self-propelled artillery guns (SPAG) earlier supplied to the Syrian government from Russia. The SPAG system used in action was Actasia, self-propelled artillery guns able to destroy enemy positions by a high angle of fire.

The robots were controlled directly from the Russia, as the live feed from the reconnaissance drones deployed on the battlefield was passed to the field command center “Andromeda-D”, as well as to Moscow — to the National Control Centre of the Defence command post of the General Staff of Russia, according to the Sputnik News.

The robots did the job as they approached the militants’ fortifications at a distance of 100-120 meters in order to attract fire in their direction. After the enemy opened fire, they were able to detect enemy positions so the artillery guns (SPAG’s) immediately struck at them.

Following the Russian military robots, at a distance of 150-200 meters, the advancing Syrian special forces attacked, thus clearing the way for the capture of the strategic height.

The remote controlled drones followed all movements of militants while artillery strikes were conducted at their positions. The hell on earth struck on them, and hardly 20 minutes after the attack of the military robots began, the militants fled, abandoning their positions. They also left their dead and wounded comrades on the slopes of the height of 754.5. About 70 dead militants were killed during the operation. No members of Syrian special forces died in this attack, only 4 were wounded.