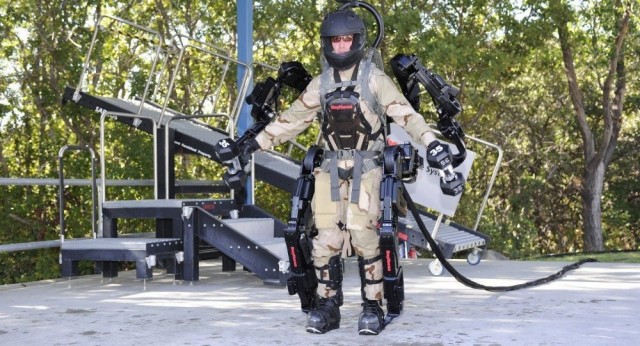 Alexander Kulish is head of the department at the United Instrument Corporation and he informed public about the exoskeletons manufactured by its company. He said that development of a power source for the exoskeleton remained a major problem.

“We are working on that… Right now our exoskeleton consists of a number of drives and a control mechanism, but it needs a power source, which means that we need a battery powerful enough to keep the robotic suit running for hours on end,” he said.

Alexander Kulish stated that existing prototypes are primarily used for cargo hauling purposes. They are too bulky and slow to be used in combat. There are several means of operating robotic suits, including via a muscle interface. Teaching them to understand brain commands is a real challenge, though, he added.

“We believe that a neuro-interface connecting the human brain with an exo-suit is the most efficient means of controlling it. The problem is that we need to teach the computer to understand brain-transmitted commands and this is exactly what we are now working on,” Alexander Kulish said in conclusion.

The idea behind exoskeleton is to support the wearer by boosting their strength and endurance with improving their overall skills which should be ideal for the future soldiers. They are commonly designed for military use, to help soldiers carry heavy loads both in and out of combat and they could bring revolution.

Opposite of military use, similar exoskeletons could be used in civilian areas to help firefighters and other rescue workers survive dangerous environments and carry on their mission lot easier. Imagine the firefighter with extraordinary strength, or some other rescue worker in the various life threatening situations where they could use exoskeleton and act more efficient than usually.