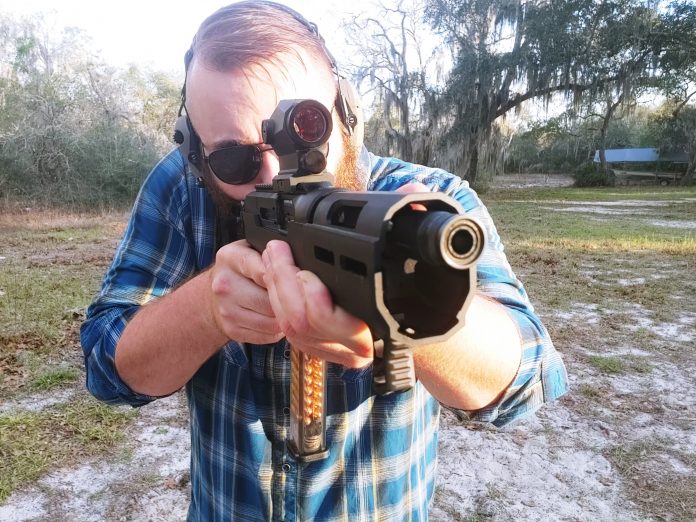 PCCs rule. They are fun to shoot, cheap to shoot, easy to suppress, easy to control, and now they are everywhere. The original PC Carbine from Ruger was a neat gun, but I had no need for another full-sized rifle PCC when I already have a CZ Scorpion rifle, a Kel Tec Sub 2k, and a carbine sized AR in 9mm. When Ruger sent me an email asking if I was interested in their new model, the now premiering Ruger PC Charger I perked up. Excuse me? But Ruger is doing a 9mm sub-gun style pistol? Yes, please.

The PC Charger uses the tactical chassis that you see on the newer model PC Carbines. This chassis includes a 1913 rail to attach MPX style braces, or if you form 1, it an SBR. A gun like this is begging for a brace. Without one, it’s a bit unwieldy. My friends at SB Tactical were nice enough to send me an FS1913 brace that is the absolute perfect fit for this gun.

The PC Charger Up Close

The gun has a 6.5-inch barrel and retains the breakdown capability of the PC Carbine. The combination of a folding brace and a breakdown barrel makes this an incredibly compact firearm for storage and transportation purposes. The PC Charger comes with a Ruger magwell and a Glock magwell. You also get a Ruger SR series 17 round magazine. I swapped magwells because I have piles of Glock magazines, including extendos, and even a KCI Drum.

There are no iron sights, so you’ll need a red dot, and AR height dots work perfectly with the gun. Without a brace, it ends resembling some kind of stockless grease gun or even a Swedish K. The chassis is very modern looking, and the gun looks as if it might have stepped out of the future. The barrel is also free-floating with a short M-LOK handguard. It comes with a built-in handstop.

To top it all off, we even get a QD slot that’s perfect for a single point near the rear of the gun. As a package, it’s very well put together, and when you consider the MSRP of $799, I can see it undercutting guns like the Scorpion quite a bit.

The safety is a Ruger style push button. It’s not fancy, but it works perfectly fine. It clicks positively and gives you good tactile feedback. The pistol grip is actually an AR pistol grip. If you don’t like it, you can replace it. I have no issues with it and find it comfortable and well made.

The gun is a lightweight weapon that’s 5.2 pounds without the brace. The aluminum brace doesn’t add much weight to the design at all. The PC Charger is a light and handy little gun. It would be perfect for home defense if you wanted to go the sub-gun route.

Oh, man is this a fun gun to shoot. It’s a simple blowback design, but Ruger uses what they call a dead blow action that incorporates a massive tungsten weight in the bolt to reduce bolt travel and ensure proper operation. It does work, and the recoil created by the blowback nature of the gun is softened quite a bit.

The PC Charger also has an amazing trigger. It’s like a good AR trigger. Not a Geiselle, but well above guns like the Scorpion, the Kel Tec SUB2k, and more in line with the MPX trigger. It’s short and sweet, and I appreciate that. 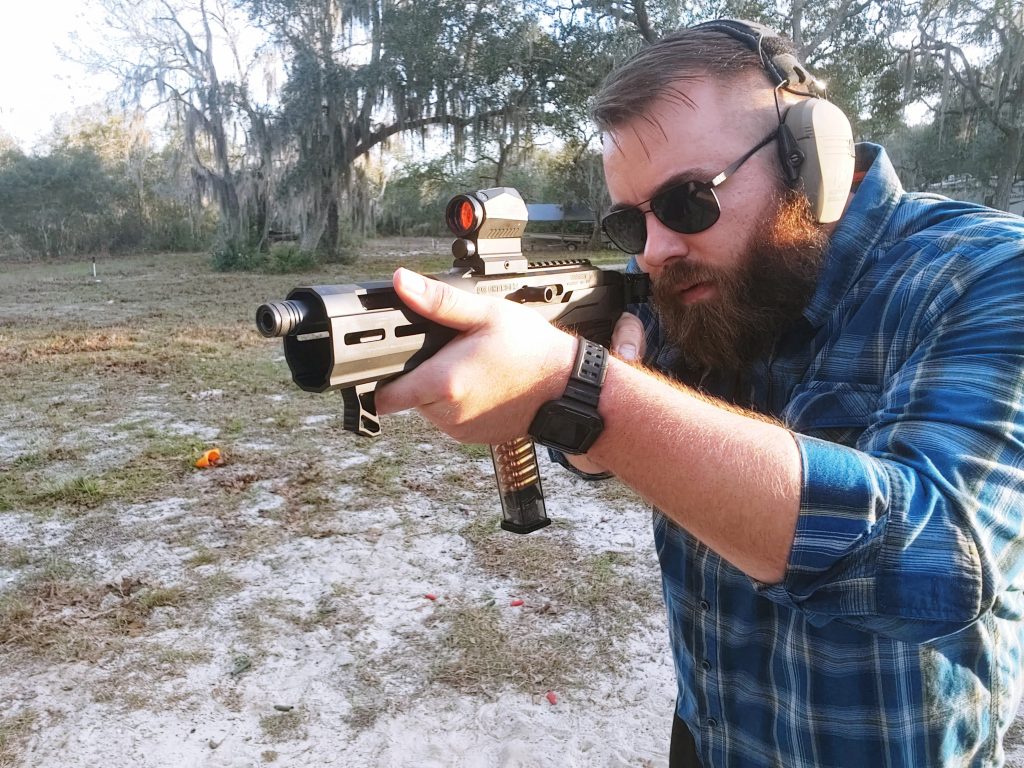 Accuracy wise I went as far back as 100 yards with a red dot and a man-sized target. I wasn’t making sub MOA groups, but I landed every round in the chest. Bullet drop with 115 grain was significant enough that I aimed at the head of the target to land in the middle and lower portion of the chest.

At a more realistic 50 yards, I could hit a 10-inch gong with a red dot from the offhand with a rapidish cadence with relative ease. I took just enough time to acquire a decent sight picture and squeeze the trigger again. 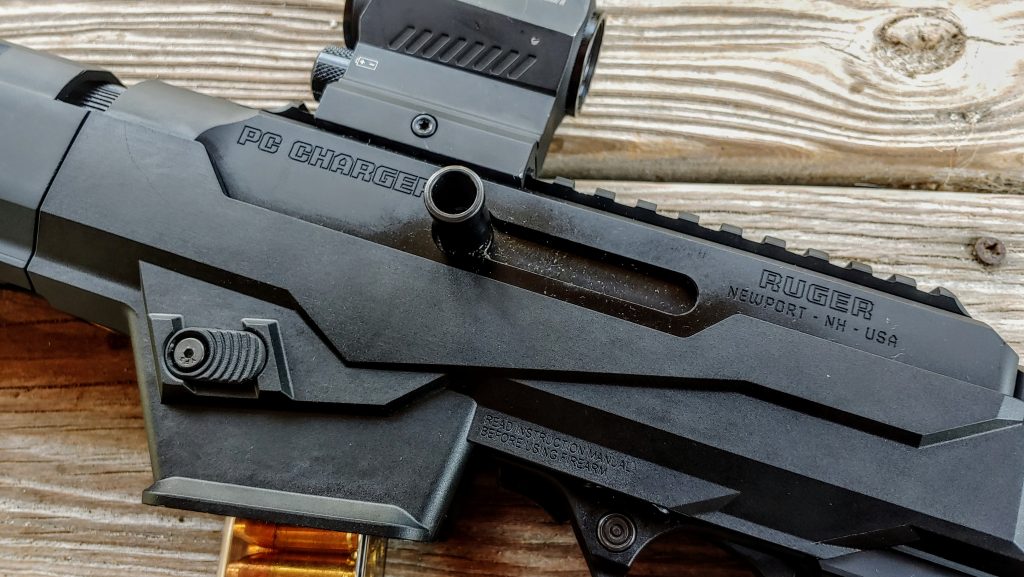 At closer ranges, the gun is so light it’s easy to move between targets and control when firing rapidly. The M-LOK handguard seems to stay quite cool when firing lots of rounds rapidly. I dumped a 50 round KCI drum at a ridiculous rate and could still hold onto it without discomfort.

The PC Carbine market is surprisingly large, and most of the products will work with the PC Charger. This includes charging handles, magwell funnels, and magazine releases. I’m excited to see what comes out for the PC Charger and to get my hands on some of the aftermarket goods.

The threaded barrel is just begging for a suppressor or a muzzle device, and the common thread pattern makes it easy to find either that will fit it. TandemKross has a compensator I might have to jump on.

Overall the PC Charger is a great gun. It’s well made, a bit more appropriate for a 9mm platform. It’s modular, ergonomic, and reliable. Ruger is starting to become a foward thinking company, and the PC Charger is most certainly a part of this evolution. Hell, they beat Glock to making a Glock carbine.