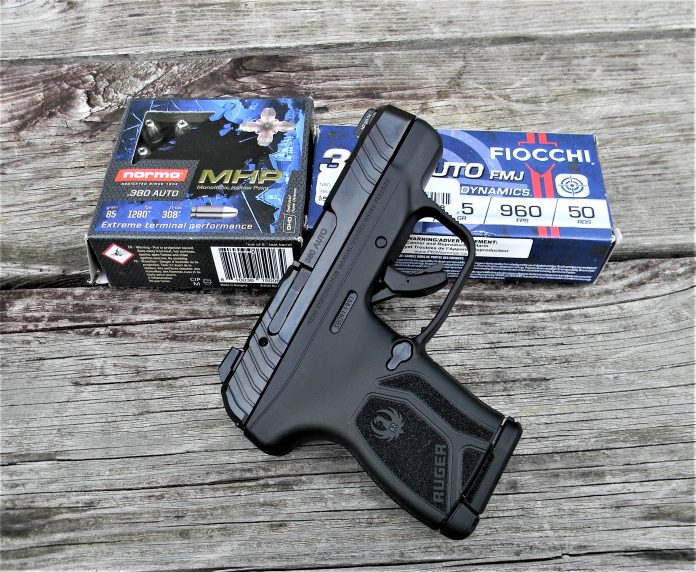 There is a class of handguns known as pocket pistols. The original self loading pocket pistol might have been a .25 ACP or perhaps a .32. The double action first shot .380 pistols were really holster guns or jacket pocket guns. Americans like something they can tote in the pocket.

While I prefer a compact 9mm or Commander .45 in an inside the waistband holster some folks struggle with larger guns. Being armed with any gun, they feel, beats tooth and nail. I agree but don’t be in the situation of being armed with a deadly weapon and not able to defend yourself well. Many small pistols are less than reliable or have a terrible trigger and poor sights.

A few years ago Ruger introduced the LCP. The LCP is a double action only slim line pistol in .380 ACP. The LCP is reliable and fits flat and light in the pocket. The pistol was upgraded to the LCPII with a much better trigger and superior sights, as well as a better grip treatment. The pistol being reviewed today is a more advanced LCP.

The primary difference between the LCP MAX and the LCPII is the grip frame and magazine capacity. The new pistol features a longer slightly wider handle. The new pistol is a double digit capacity .380 ACP pistol. Ten rounds in the magazine in such a small pistol is amazing.

Savage once advertised TEN SHOTS QUICK for their .32 ACP pistols- but they were much larger and heavier than the polymer frame LCP MAX. The grip of the new gun fits my hands well, better than the older gun. It is just enough larger that an average sized hand will find the pistol comfortable.

The slightly wider grip frame feels a bit more comfortable when firing the pistol. The grip treatment provides a good gripping surface without being uncomfortable. The .380 ACP can be a little snappy in a ten ounce pistol. The grip pebbling is well designed. Ruger has also made needed changes in the slide lock and magazine latch to accommodate the larger magazine. The take down is the same, press a pin out from right to left to break the pistol down. It isn’t as easy as the Glock or turn a lever on the SIG but you have to compromise in small handgun designs. We don’t need a speed take down.

The trigger is the same LCPII type with a safety blade in the center that must be depressed to fire the pistol. The trigger action breaks at seven pounds and one ounce. This is a safety feature as the pistol will be carried close to the body or in a pocket. A tip- when drawing from the pocket be certain to keep the finger off the trigger. Don’t reach in the pocket and make a firing grip or you will not be able to draw. Blade the hand in to grasp the pistol and make a full grip as the pistol is drawn.

An excellent set of combat sights rides on the .81 inch thick slide. The pistol features dual recoil springs on a steel guide rod. A single ten round magazine is supplied. At a retail price of $449 I would like to get a spare magazine. The pistol was lightly lubricated and test fired with a cross section of ammunition. Most of the rounds were expended at 7 yards. The primary load used was the Black Hills Ammunition 100 grain FMJ. Function is good, the load burns clean. It isn’t difficult to punch the loads into the X ring at 7 yards. You are far from helpless at 15 yards or so. I also fired a few rounds of the Black Hills Ammunition 60 grain Honey Badger.

I don’t trust most hollowpoints in the .380 ACP as they tend to under penetrate. Six to eight inches just isn’t enough penetration. The Honey Badger begins cutting flesh as soon as it hits and offers good penetration. This is a load that maximizes the .380 ACP. I also fired a small quantity of the Norma .380 ACP hollowpoint. This 85 grain JHP uses a monolithic (All copper) hollowpoint at an advertised 1285 fps. Not certain what factory test barrel they use but in the Ruger actual velocity was 990 fps, still respectable for this type of loading. The Norma JHP penetrated 14 inches of water without any expansion at all. Just the same- the penetration is on the level you need with a personal defense pistol. Better this load than a JHP that stops in the triceps if you cannot obtain the Honey Badger.

The pistol fed, chambered, fired and ejected all ammunition. Recoil isn’t too sharp and practical accuracy at short range is good.  I like this pistol and it will be carried often as a backup. I used a Baddaddytactical.com appendix holster during the test. The holster is secure, a good fit, and ideal for deep carry. This holster confirmed the LCP MAX fits LCPII holsters.