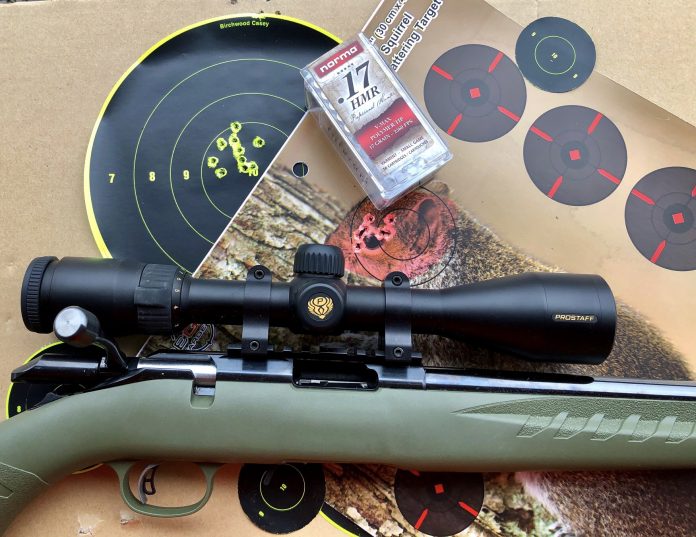 I have a new rifle in my gun safe. It’s the Ruger American Rimfire chambered in .17 HMR.

I really like this gun, so I thought I should say a little more about it and why I chose it to become part of my firearms family.

When I got back from SHOT Show 2019 and started reading up some more on learning small game hunting, this caliber came back to mind because I had so much fun with it on Range Day. I started with an internet search for reviews and recommendations of rifles available in .17HMR, and Ruger had very good reports. I handled a few similar models in the store, and ended up ordering this one for store delivery.

.17HMR is a higher velocity, flatter shooting caliber than .22LR. Though the ammunition is significantly more expensive, it is sometimes easier to find than .22LR. I loved how I was nailing targets at SHOT Range Day with Norma .17 HMR – even in pretty windy conditions. I wanted to try this caliber for squirrel and varmint hunting. Though I was advised to go for headshots with squirrels if I wanted to have anything left to eat when I was done – Ha!

One of the big selling points of this particular Ruger was the modular stock. I have a short length of pull, and so does my daughter who wants to learn to hunt with me, so we both needed a smaller gun.

The synthetic stock on the Ruger American Rimfire has interchangeable stock modules, which makes it adaptable for length of pull and comb height. Some models come with an different stock module already in the box, but this one did not. I ordered a shorter stock module with a raised comb at Shopruger.com and it arrived within a few days.

Changing the stock module was easy-peasy and required no mechanical aptitude whatsoever. It involved unscrewing the rear sling swivel stud, popping off the existing stock module, popping on the new stock module and screwing the stud back in. Ta-da! My gun was now set for short-armed me, or a regular armed person wearing a heavy coat.

Another reason I chose this particular model was that it sported a heavy threaded barrel – just in case I ever want to venture into suppressor territory. Right now I’m too impatient to pay all that money and then wait interminably for the government wheels to turn, but I might change my mind someday.

Another personal selling point for this Ruger is that it has an adjustable trigger (approx 3 pounds to approx 5 pounds). I am not a fan of super-heavy triggers -manhandling a trigger screws up my aim. I’ve also lost some grip strength due to hand/wrist arthritis issues. The factory setting ended up being comfortable for me as pre-set, but it’s nice to know that I can easily adjust it later if I want to.

The green color is just how this model comes. But I have never been afraid of color on a gun. At least it doesn’t look like every other black gun on the rack at the range. This way I’ll know which one is mine.

Additionally, I liked that this model has a short rail, rather than being just tapped for rings. I am more comfortable with rails, and sometimes I just prefer to go with what I know. The rail made scope installation easy.

Speaking of scope, I did some internet searching for rimfire scope recommendations and ended up with a Nikon Prostaff 3-9 x 40 Matte NP, which I’ve also been pleased with so far.

One more draw for me with the Ruger American Rimfire was that this is a bolt action gun. I’ve never owned one of those before, so I thought that learning a new platform might be a good thing to keep my brain busy. It proved to be more of a learning experience than I originally intended, though.

Partway through my first trip to the range in March, the gun stopped extracting the spent brass. It shot great, but I had to use my pocket knife to extract the brass after every shot. Ruger got back to me right away after my inquiry and happily sent me replacement extractor parts with the promise that if that didn’t remedy the problem that they would take it back for remedial action.

Though I received the parts promptly, I just always had some other project jump ahead in line this spring and I never got back to it. Finally, a few weeks ago I got a “round tuit” – watched a YouTube video on changing the extractor and clip, and replaced those parts.

A return trip to the range – this time with squirrel-size targets- verified that the problem was fixed. I was very pleased with the accuracy at 50 yards, and I’m sure it will go out much further than that. I’m just not sure I could see a squirrel at farther away than that, so it’s my own visual limitations that are keeping me at 50 yards for now. This caliber and rifle have the capacity to shoot better than I can, so bigger varmints and farther away small game are on the menu if I so choose.

For the second sight-in I used Norma ammunition and this stuff was fantastic! I was not using a sled – just a front rest from the bench – and got great accuracy. I’m not normally an accuracy-crazy kind of person – if I hear the steel ting that’s good enough for me – but squirrel heads are kind of small, so I needed to tighten up my expectations. The Norma .17HMR did the job for me on a breezy day just like it did at SHOT. I was tickled!

All in all, I am very pleased with the combo of the Ruger American Rimfire and Norma Ammunition. I hope to get my daughter out there with this during the holidays. Small game season runs through the end of February, so standby. Hopefully I’ll have some more to share about that in the future!