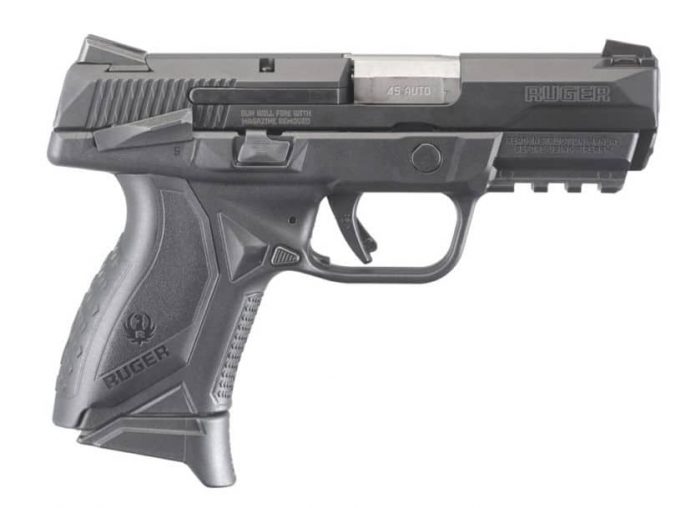 When I first read through the list of standard features on the Ruger American Compact it appears that the engineering team really took the time to listen to the concerns of their target audience. The pistol has a good blend of technologies and features that are found on other Ruger pistols. The difference is that with this one the company seemed to put all those features in a smaller polymer frame and chambered it for a round that is a proven man stopper in the .45 ACP. Lets take a spin around the pistol and the released specifications and hopefully get some feedback from our readers at the end of the day.

Capacity: 7 or 10 round depending on magazine

California or Massachusetts Certified: No

The one constant in firearms development and sales is that the market changes all the time and manufacturers chase market trends in order to capture sales in these new and emerging markets. This is pretty much the basics of the firearms business model across the board. Sturm, Ruger & Company has watched the industry turn more towards conceal carry sized pistols and away from larger full sized pistols and has attempted to entice the CCW market with the Ruger American Compact. The fact they now released it in .45 ACP tells me that they see an opening in that market and in that caliber in particular. Now wether or not the company’s marketing and sales plan works out, only time and the bottom line of number of units shipped will tell that story completely.

Many gun owners that I know and shoot with are pretty happy with their collections and it will take something really special to make them run out and purchase another gun. The idea of an American made polymer, compact .45 ACP pistol might make them think about adding to their collections. When I read about the Ruger American Compact, I was a bit sad to admit that I know nothing about the most recent line of Rugers aside from their new tilting barreled versions of the Ruger Mk II. Now the advantage of not knowing about a new gun or series of firearms is that I get to go research and possibly test them out. That is my plan for the Ruger American.

To date, finding any large images of the Ruger American Compact in .45 ACP has been a bit of a chore, as has been finding out when my local gun shop might have any in stock. The tentative date that I have been given by the people I know is “a few weeks to a few months”, which is a rather wide time frame in my mind. The 9mm version of the pistol is readily available but that unfortunately is not the case with the .45 ACP.

We want to know what people are using for their conceal carry weapons, what caliber, and brand are you relying on to protect your life and the life of your loved ones ? Some of us are forthcoming about our CCW choices and others are more protective, and thats fine. If you want to tell us, we would love to hear it, or better yet post a picture in the comments section below.