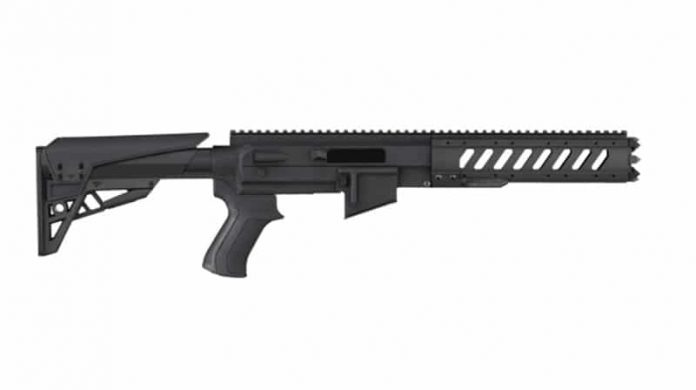 External accoutrements for the traditional Ruger 10/22 have been all the rage for some time, but the popular Takedown model foiled the plans of shooters who wanted a more tactical look — until now. Milwaukee-based Advanced Technology International has developed a new AR-22 stock kit.

ATI worked with the Ravenwood company to adapt its popular AR-22 TactLite Stock System for the original Ruger 10/22 to the Takedown line. The new kits allow for complete operation of the Takedown’s break-apart capabilities, while lending the appearance of a modern tactical rifle.

The AR-22 utilizes an AR-15 modeled polymer receiver chassis and the stock kit includes all of the components necessary to make alterations with precise fitment and invisible parting lines. Retail price is $189.99.

“We are extremely happy to be able to bring this highly requested product to market for our customers;” said Amanda Mapes, National Sales Manager. “Our engineering team was able to adapt our original design in a way that kept the visual integrity of the AR-22, without sacrificing any of the intended Takedown functionality.”

ATI’s kit makes use of added aluminum components that mount to the receiver for better rigidity. The front half of the kit installs in much the same fashion as the original components do, utilizing the rifle’s original mounting locations.

The AR-22 TactLite Stock System is covered by the company’s limited lifetime warranty and is available now at www.atigunstocks.com and from select ATI distributors. It will be released to other stores later in March 2016.