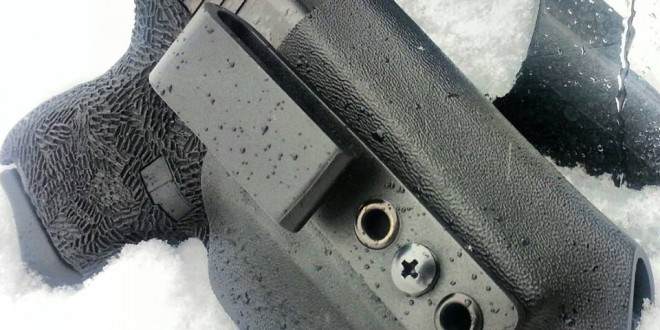 You may have seen the very cool g19s or G26L that we had custom built for us by the team at Innovative Gun Fighter Solutions. There was several reasons we had this built instead of buying a G26 or just a G19.

We had ordered a holster from Sawyer Concealment in the past that is IWB and OWB interchangeable but was not designed to be carried with a light or Appendix carry. For this reason when we came across Roger’s Custom Kydex we decided to try them out to fill the gap in our holster arsenal the G26L created.

We worked with Roger to spec out a custom IWB Lighted Holster which is an Appendix Carry rig with a light. This holster is designed with a 0 degree cant for a fast reliable draw and easy concealment in an appendix carry position.  We opted for the Pull the Dot belt buckle on this rig and will discuss why below all done in a grey kydex.

It’s the new thing now don’t you know? Seriously you can not watch YouTube or read a concealed carry magazine now without hearing somebody talk about appendix carry. However asking real world gun people I find most of them do not use it or do not know about this. There is one exception. Law Enforcement Officers appear to have been doing this off duty or undercover for a long time. Some of them will tell you “I appendix carried before it was appendix carry”

Some of the advantages associated with the appendix carry include:

A few things to note

I want to talk about our last point here as it important when picking a holster. If you look all the major Kydex shops and the polymer shops have dedicated holsters for appendix carry. You will not they tend to be thinner then the typical IWB holsters. Instead of using a wider holster to disperse the weight, add stability and create more purchase area to have the belt pull the holster close to the body they use a completely different design. My decision to try appendix carry with a lighter holster was a huge mistake. I would highly recommend that anyone that is considering appendix carry not do so with a pistol that has a light. The added width needed to accommodate the light made carrying this rig completely uncomfortable for anything but standing. When I compared this rig to one without the light I found it much easier to sit comfortably.

Appendix rigs are usually attached via a single point so that the gun can move around more than in a IWB strong side carry. The reason is as you bend, sit or move you will need the barrel to shift slightly or you will be jabbing your junk, leg or gut. The single point connection allows for greater mobility and that translates to less jabbing. If you’re going appendix make sure you get a holster with a single point connection.

Roger is a great guy and very knowledgeable. As a current LEO and Kydex bender  Roger knows a thing or two about carrying all day every day. When he recommended to me the Pull the Dot Loop I was surprised. For one I had not heard of it and 2 I was thinking with only a single point of attachment how well is a snap connector really going to work. Having worked on boats for years and relying on snaps to hold on seat covers I was very aware of the failure point on these types of connections.

The Pull the Dot connectors are not your typical snap connector. Due to the addition of a small piece of metal at the bottom of the grommet the snap can only be disconnected with a pull from the top down to the bottom. Since most of the pressure on a belt loop is placed from the bottom up you will find that there is really no way to disconnect this snap accidentally.

As I mentioned above Roger has been bending Kydex for a long time. He also is an experienced LAw Enforcement Officer and as such has been carrying a gun everyday either on or off duty for more years 8 years. Because of his love for revolvers he is one of the few companies out there that has a huge list of kydex holsters for most of the popular wheel guns on the market. In my research I have found most Kydex guys either ignore revolvers completely or they offer a very limited selection. Roger is the exception and has even created Kydex holsters for Speed Loaders something that is almost unheard of.

In addition to his wheel guns and speed loaders Roger really focuses on custom work over the traditional limited offers of many manufacturers. If your looking for a specific light bearing holster or need a special placement for your belt loops or maybe even a non standard cant you will be able to get what you need here. Each holster is hand made and can be specifically tailored to your request. With an email or a phone call you are likely to get the very specific needs you may have ironed out quickly.

Most importantly is the Guarantee.

We stand by our product 110%, and offer a Lifetime warranty on anything sold. If theres is ever a problem, please tell us.

Though I hate cliche comments like 110% I can attest to the fact he stands behind at least 100% and you can’t ask for more than that. The initial holster we received from him had some issues with it. 1 email is all it took. I was offered my choice of a refund or having a new holster sent out right away. With so many fly by night garage run kydex shops it is wonderful to see this level of customer service in a transaction. The new holster did not have any of the same issues and was exactly as I wanted.

If I needed a custom or revolver based holster I would highly recommend them.

If you’re looking for a speed loader kydex holster then this is the guy you want to talk to.

Roger does great work with his Appendix carry rigs but I would shy away from a light bearing one due to the added width. This is my issue and not a reflection of Roger’s work.

You can see more samples of his work as well the full line of offerings he has available. Reach out to him on email if you want to have something special created for you.