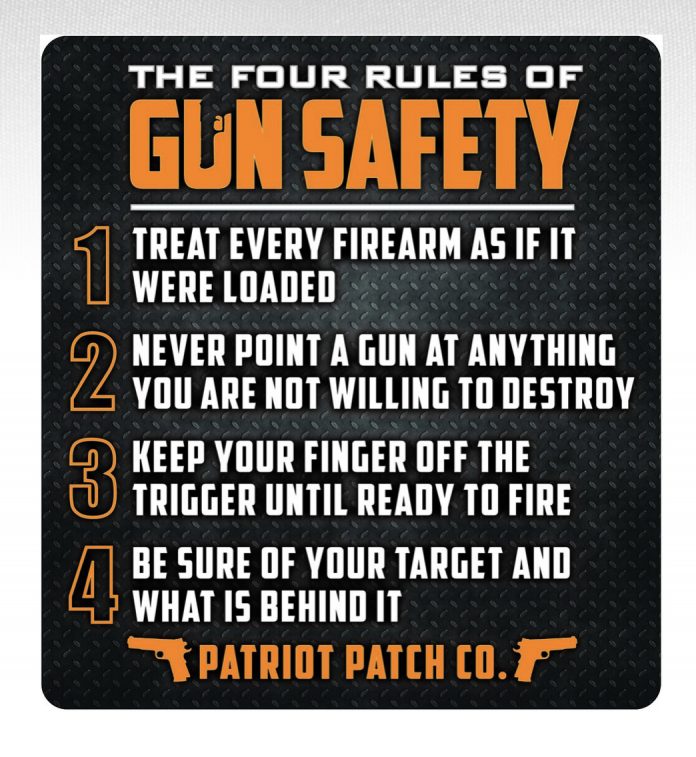 I’ve been mining my old blog for material again. This post from five years ago popped up in my social media and reminded me of something important. Upon re-reading it I felt that the material was still applicable – especially considering the surge of new gun owners we’ve had over the past couple years. There are probably a lot of people who need a safety review.

So with your indulgence I present a piece from five years ago that could have been written yesterday.

I took a firearms class yesterday.

It wasn’t an entirely good experience, and I’d like to tell you why.

I took a women’s “CCW” class with the intent of brushing up some basics and working the bugs out of my Glock 43 and TTI basepads. I had attended Gunsite’s 250 pistol class last year, but that is the only other carry or self-defense class I’ve been to, and I wanted to work on those type of skills.

It wasn’t that I didn’t learn anything yesterday. I did learn some drills that will be useful to me, and I learned that I do like the extended TTI basepads with my Glock 43.

But I also learned that I need to speak up and be forceful when I feel that circumstances or methods are unsafe.

There were only two other women there besides myself (the instructor was male). One gal was a true novice, and the other woman was supposed to be a basic pistol instructor herself.

I tried to be open-minded at first. After all, I realized that I am still a square-range kind of gal trying to get a handle on the carry-world. I realized that things on this range might be “looser” than the tight match range rules I’m used to.

But there were what I felt to be safety issues, such as allowing gun handling behind the line while others were ON the line, and not enforcing holstering before turning and leaving the line.

Even the gal who was supposed to be a basic pistol instructor was guilty of this. If an “instructor” muzzle sweeps me leaving the line, I gotta wonder who and what she is teaching. Even the most basic of “basic pistol” instructors should know this. I don’t care if the slide is locked back – don’t wave it in my direction. You have a holster – please use it. But she wasn’t corrected in this by the class instructor either.

Even so, I didn’t say anything. I brushed it off as me being a control freak, and didn’t think it was “my place” as a student to point out safety concerns. I realize now that I should have said something – or simply left – but I was guilty of the usual female inclination toward wanting to be polite, not wanting to rock the boat, and not trusting my own gut about what was safe and what was not.

But I’d had enough when the instructor asked us to point the guns at him for a force-on-force exercise. I don’t care if he “checked” our guns first, it still violated the first two rules of gun safety, and I refused. I did it politely, but I refused.  I offered instead to remove my slide and just use the grip of the pistol for the exercise. He allowed me to do this, but the other two gals – including the supposed instructor gal – complied with his request and used their fully functional firearms in the exercise. I’m sorry, but this is just flat wrong. That kind of exercise is what blue guns and training barrels are for. I don’t honestly even care if that’s what the “operators” do – because we were NOT “operators”. And now a novice shooter and a low level “instructor” will both think that it’s okay to point a gun at someone if they tell you to – because they have been shown this unsafe behavior in a class.

When I got home, I contacted a friend who has 30 years in the Firearms Industry and he confirmed for me that this was not “Big Boy Rules”, this was simply unsafe.

I won’t be naming names or places, because when I emailed my concerns, the instructor thanked me for my feedback. He seemed like a good guy, and I’m not trying to be punitive. Maybe his “style” works for combat pistol or something. But I won’t be taking another class from him, because it doesn’t work for ME. And I’d like folks to learn from my experience. If it feels unsafe – it probably is. If it bothers you – don’t do it. I should have never been afraid to speak up.

As my friend advised me, “Where safety is concerned — ROCK the BOAT.”