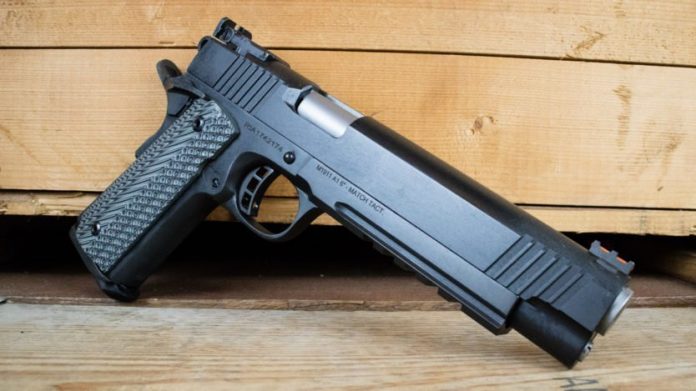 Rock Island Armory has tamed the 10mm with a 6″-barreled 1911 known as the Pro Match Ultra. Anyone of those words independently hints at above average, putting them all together almost sounds a bit too far. Fortunately, with Rock Island, it isn’t and this gun delivers with features once considered custom right out of the box.

The 10mm round has some lore to it and a lot of that has been earned.  The load we tested from Armscor throws a 180gr bullet over 1,000fps to yield over 400ft-lbs of energy.  If you’re not into math that’s more than a .45acp and about an extra third more than standard 9mm.  The 10mm has gained traction as a hunting round for deer-sized game and smaller.  Understandably Newton’s pesky physics laws mean handguns chambered in 10mm can be tough to tame.

A bushing-less barrel, full-length guide rod, and lengthy rail space start the front of the gun under an orange fiber-optic sight.  Orange isn’t a color commonly seen in fiber-optic sights, but our sample proved bright enough to grab attention without being so bright we couldn’t see the edge of the sight.

The big question:  How does it shoot?  How about ringing every shot on an 8″ plate from 50 yards?  If you don’t believe it check the intro of the video below.