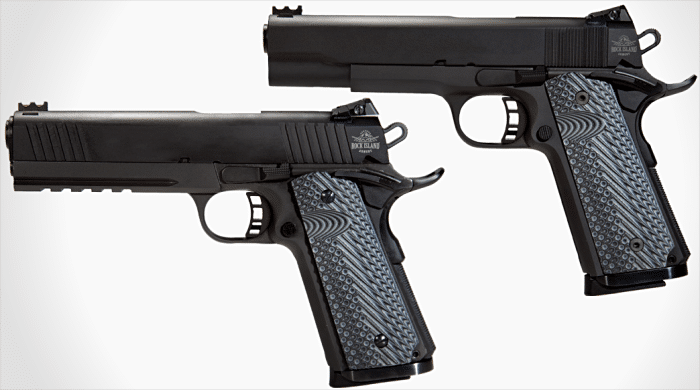 Rock Island Armory is expanding on its family of Micro Mag 1911s with four new single-stack pistols chambered for .22 TCM. While the pistols are optimized to shoot the high-speed cartridge, Rock Island is shipping them with 9mm conversion kits to use with the more common round.

“We’re very excited to offer the latest generation of .22 TCM pistols to the American public,” said Martin Tuason, president of Armscor, Rock Island’s parent company. “It’s been our goal all along to give shooters the ability to discover the advantages of this new cartridge and we’re confident shooting enthusiasts will recognize the value behind the conversion kits.”

The original Micro Mag pistols are double-stack pistols with a real cult following. With these new models Rock Island is poised to break into the larger, standard 1911 market.

Even though Rock Island Army has been extremely supportive of its Micro Mags with ammo and magazines available through the Advanced Tactical web store it’s always great to have more options.

When it comes to the grips, though, we’re sure a lot of people will be happy with the factory panels manufactured for Rock Island by VZ Grips. VZ grips is one of the best in the game and the new Micro Mags come with textured black and grey grips with a scalloped thumb cutout.

The sights are solid, too, with all for models sporting Novak-style orange fiber-optic front sights and fully-adjustable rear target sights by Tru-Glo.

Rock Island’s new Micro Mags are offered with traditional or railed 2011-style frames with full-size grips for use with 10-round magazines. The other option is barrel length, user’s choice of standard 5-inch or more compact 4.25-inch barrels.

Even out of a shorter barrel .22 TCM is an impressive cartridge. With a 4.25-inch barrel the cartridge makes around 1,900 feet per second with a standard 40-grain bullet, just a hair less than the 2,100 feet per second it hits with a 5-inch barrel. That translates to a little over 300 foot-pounds of force with the shorter barrel and just under 400 with the full-size models.

The cartridge was developed by Tuason and gun designer Fred Craig a few years ago and is made by shortening a .223 Remington case down to fit the overall length of a .45 ACP cartridge and was specifically made for 1911-pattern handguns. It uses the same .224-inch bullets and can be reloaded although dies can be hard to find.

It’s been pretty common to compare .22 TCM to FN’s 5.7x28mm cartridge and they do have some similarities at a glance. But unlike 5.7x28mm it was always intended to be fired from a handgun and offers better performance when fired from short barrels. More importantly, .22 TCM ammo is easy to get online and a lot more affordable at $20 for a box of 50 rounds.

Again, even if you run out of .22 TCM with these four guns, you can always switch over to 9mm.

With a suggested price of $830 these four guns are also very reasonably-priced. Real-world prices are always less and that includes the conversion barrel. These also feature the new, smaller and more elegant roll mark just behind the slide serrations.

If you’re looking for something a little different and yet familiar, check out the new single-stack Micro Mags. You might find one that’ll be your new favorite gun at the range. 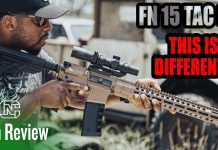