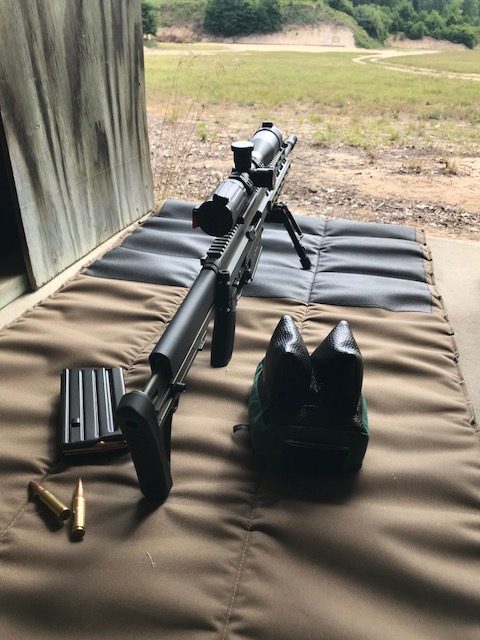 I have had a little time to play with my Robinson Armament XCR-M. So far I am impressed.  I love the ergonomics. No matter if you’re a righty or a lefty all administrative functions can be performed quickly with little to no effort. The gun is built solidly, looks great, but the true test of a rifle is not how awesome it looks but how well it groups shots at varying distances.

Basically it comes down to how you want to use your gun.  My plan for the Robinson Armament XCR-M is to make accurate shots at various distances without needing to constantly clean it between shots.  I need it to maintain optimum accuracy for 175 to 200 rounds. For this type of shooting the Cu Equilibrium or Copper equilibrium procedure makes the most sense.

To achieve Cu equilibrium you fire single shots with a cleaning between each shot for the first five rounds.  When I say clean I mean only removing the carbon.  I do not use a copper solvent during this procedure. We repeat but only cleaning after every 5 shots.  I do that 6 times.  Now we bump it to 10 shots between cleaning for 8 repetitions. Finally cleaning after 15 shots for 3 repetitions.

As the copper builds up the shot groups get tighter. you will notice the group size and bullet speed stabilize.  This is called the sweet spot and the best time to find what ammunition your gun likes best.

Robinson Armament has their own break in procedures for the XCR-M. The manual says to open the gas system up and fire 40 rounds down range.  Not wanting to use my expensive test ammo for the first part of the break in I bought two boxes of  Armscor 308 to send down range.

Day 2 I concentrated on dialing in the gun, optic, and ammo to get the best groups.  I was not quite half way through the Cu equilibrium procedure but decided to use my test ammo anyway.  I figured if I got good groups now, they would get even better once I arrived at the sweet spot.

The plan for testing started with open sights, then through my scope at 25 yards to make sure everything was working properly before hitting the 100 and 200 yard ranges.  Next I wanted to shoot several brands of ammo to see what worked the best.  The final test was to shoot a group, remove the barrel, re-install the barrel and re-shoot the group.

The Robinson Armament XCR-M is a modular rifle with the ability to quickly perform caliber changes. I have had rifles in the past (LMT) with this capability and was wondering if the XCR-M would perform as well in this test. Robinson Armament says I should expect the group to move about 1″ right or left after reinstalling the barrel. 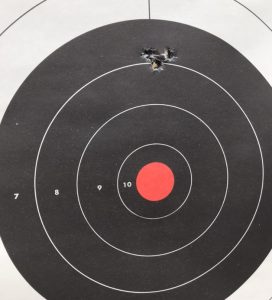 I picked up several brands for my testing ammunition because I wanted to see how the rifle would function with a wide variety of rounds.  My selection included Remington 168gr Matchking BTHP, Armscor, Hornady Black 168gr A-MAX, Lapua Scenar 155gr HPBT, and some military surplus all chambered in .308 win. I had watched several older reviews and was expecting accuracy to be about 1 minute of angle (moa).

Day 2 was a perfect day for testing ammo,  it was cloudy, cooler, very little wind, and very few people at the range.  I set up on the 100 yard range,used a bi-pod, and sandbags to stabilize the rifle.  My best groups of the day were with the Lapua 155gr.  Not surprising as Lapua brand ammunition is a known precision performer, with a price to match. In my circle of friends very few would be  willing to pay $75 to $90 a box for 308 Win. After seeing the results I am definitely considering this round for competition.

The Lapua loads were averaging 5/8 moa. This impressed,  since I expected maybe 3/4 moa at best. I know its match grade ammunition but this in not a bolt gun, it is not a GA Precision or a Seekins Precision Rifle; It is a Robinson Armament XCR-M gas piston gun. It was not just a one group fluke either.  I shot 6 groups that consistently averaged 5/8 moa out of an 18.6″ Heavy profile barrel with the Lapua 155gr BTHP ammunition. 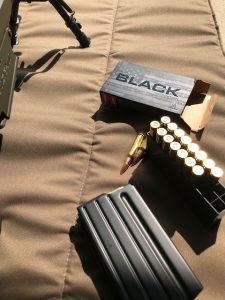 The Hornady, Remington and Armscor performance did not disappoint either.  Remington and Hornady both averaged 3/4 moa. Armscor came in 4th with an average of 1 moa.  I did not get any group data on the surplus ammo as I had some feeding and extraction issues. I thought it might need to oil the gun a bit, but before I did that I fired some more of the Armscor through it with no feeding issues.

Robinson Armament says I should have no issues cycling steel or surplus ammo once the rifle is completely broken in.  I am not worried as I don’t plan on shooting anything but match grade ammunition.

The next test I wanted to perform was to see how well the gun held its zero after removing and reinstalling the barrel.  Robinson Armament says their rifles will maintain accuracy within 1 moa.  It took a little effort to remove the barrel the first time as the screw was pretty tight.  Once the Allen screw was loosened enough the barrel and gas system slides right out.  I slid the 6.5 Creedmoor barrel in its place and torqued the Allen screw to the required specifications. 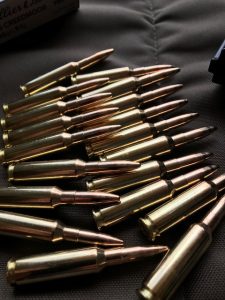 The Hornady Match 6.5 Creedmoor gave me even better groups than the Lapua in .308win.  I averaged 3/8 moa with the Hornady 6.5 Creedmoor 140gr ELD Match.  I only brought one box of ammunition as my main focus was on accuracy of the 308.  Next I rapid fired 10 rounds as quickly as I could making sure I saw the cross-hairs on my target between each trigger pull.  My rapid fire group opened up to 1.25moa. Not bad for rapid fire shots.

With barrels swapped again, I shot two groups of Hornady Black 308 to test group shift.  Robinson Armament nailed it when they said 1 moa.  My groups were exactly 1moa to the left.

I capped the day off by taking one shot at a 6″ steel target at 200yds.  That sweet sound of ringing steel and a quick glace through the spotting scope confirmed that this is my new favorite gun.  Dead center hit told me its time to put the gun away.  You should always end a shooting session with a positive experience.

The Robinson Armament XCR-M exceeded all of my expectations on the range.  Older reviews had me curious about its capabilities but just like wine gets better with age so does Robinson Armament.