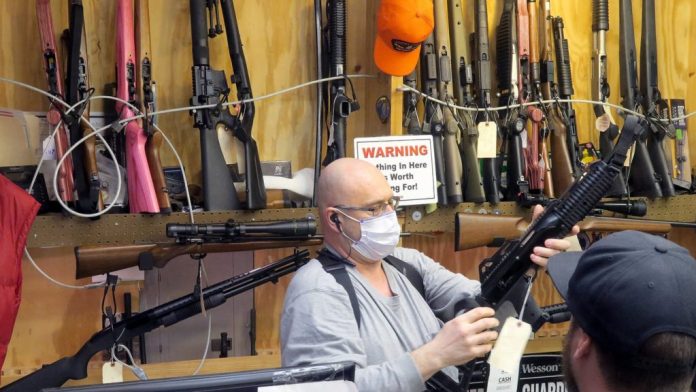 Gun owners and dealers alike are well aware that firearm sales spike during times of national crisis. This usually occurs when people fear that new gun laws may be implemented in the near future. However, this year a different kind of scare has sparked a national run to the gun shops. While we are in an election season, the increase in purchasing firearms also correlates with the rise of COVID-19, and is greater than the typical surge.

How Large Is the Increase?

Before the reasons of this surge are examined, let’s examine just how large this surge has been. There actually aren’t direct counts of the exact numbers of firearms purchased. However, there is data from the National Instant Criminal Background Check System (NICS). Every time someone purchases a firearm from a licensed dealership, a background check is conducted. Statistics from this don’t technically record how many firearms have been purchased. But reasonably accurate estimates can be made based on this background check data.

In March, approximately 2.6 million firearms were sold. This is an 85% increase over March of the previous year. In April, the number was around 1.79 million, marking a 71% increase. Data suggests that in July, there were likely around 1.2 million handguns purchased and 600,000 long guns purchased which are 152% and 108% increases respectively over 2019. This increase in gun sales has been truly historic, but what does it all mean?

The coronavirus introduced serious uncertainty into the country. At times, this uncertainty has manifested as panic and panic buying. Fears of resource scarcity were bound to bring people to the gun shops along with searching for toilet paper. Fear of potential social unrest if large amounts of people could no longer find food was a driving factor. There was also the simple fact that self-reliance seems like even more of a virtue in times like this. Another part of the cause for the large increase in gun sales is that police departments across the country have become less responsive due to the coronavirus and social pressures. Response times have increased, and the value of being able to defend oneself has therefore increased as well.

Along with general societal issues, Asians faced increased discrimination that encouraged their purchasing firearms for self-protection. Reasonable people understand that looking Asian does not mean someone was responsible for bringing coronavirus to the U.S. Nor does it mean they carry the virus. Unfortunately, some are not reasonable. Many of the purchasers have been of Chinese descent although Asian Americans in general have increasingly sought out gun shops.

Our current nationwide urban unrest is also responsible. This has raised two reasons for people to purchase firearms. First, many black Americans are discovering their right to firearms ownership for their own protection. Americans are generally realizing what “defunding” police with increasing street violence may bring. In certain cities, citizens no longer feel safe relying on local government for protection. No one can know how long this will go on.

Along with these disruptions, the hot coals of the 2020 election are flaring up. Many Americans fear the changes in gun laws that a Democrat regime may bring; Joe Biden will not be kind to the Second Amendment should he win.

Neither will the coronavirus end soon. While there are talks of a vaccine on the horizon, its arrival date in unclear and unlikely within the next few months. This means that the coronavirus and its effects will be here for some time.

What will the long-term influence of all these new gun owners be? There definitely include more than the usual proportion of new gun owners. Many who were previously disinterested in firearms and self-protection seem to have changed their minds. As we see many on the left of the political spectrum exercise their Second Amendment rights, could there come a change in how Democrats view gun issues in the future?

It may well be that whichever side wins in November 2020, this increased awareness of and preparation for self-defense will continue. That would be good for the individuals doing it as well as for the health of our country.