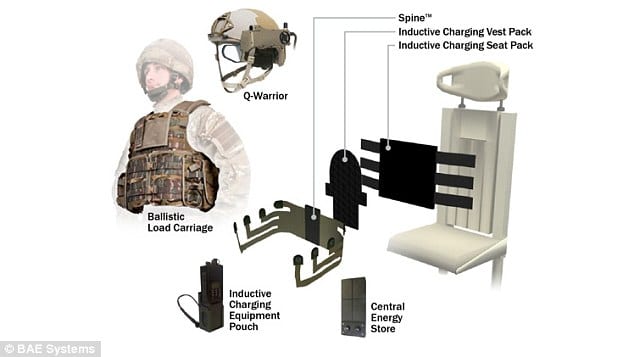 The below article is from: http://www.special-ops.org/rise-of-the-isoldier/. It immediately caught my attention as I have been seeing the rise in technology used by our soldiers during deployment as well as our local law enforcement. As a technology geek the shift to wired backpacks with charging capability has become a major push lately. It will be interesting to see how this plays out both in the defense and civilian markets.

British troops could soon head into battle kitted out in the latest state-of-the-art wearable technology.

BAE Systems has created its Broadsword range of devices that revolve around a vest called Spine.

Spine uses so-called e-textiles to wirelessly charge military equipment – and this energy use can be monitored using a smartphone app.

Spine was developed by the London-based defence firm with Surrey-based Intelligent Textiles Design.

It can power up and transfer data to and from equipment such as radios, cameras, smart helmets and torches, as well as smart weapons – effectively working as a portable hotspot.

A total of eight devices can be plugged in and charged at any one time, and the vest’s electrically conductive yarns can also be used to charge other gadgets wirelessly.

BAE and Intelligent Textiles Design said that although the technology is designed for the armed forces – and conforms to the standards set by the Ministry of Defence – it could also be used by fire and rescue services and the police.

‘Current integration of body worn equipment has not been addressed as a platform design and has resulted in an unwieldy cable harness,’ said BAE.

‘The weight of current equipment carried by the soldier is far in excess of what is considered fit for purpose.

Broadsword is a product family of interconnecting components for the next generation of soldier systems.

‘[It] delivers ground breaking technology to the 21st century warfighter.’

Spine uses e-textiles to wirelessly charge military equipment – and this energy use can be monitored using a smartphone app.

Eight devices can be plugged in and charged at any one time, and the vest’s electrically conductive yarns can also be used to charge other gadgets wirelessly.

Elsewhere, the Q-Warrior see-through augmented reality display integrates with the Spine and smartphone to overlay useful information such as GPS locations, temperatures and other data.