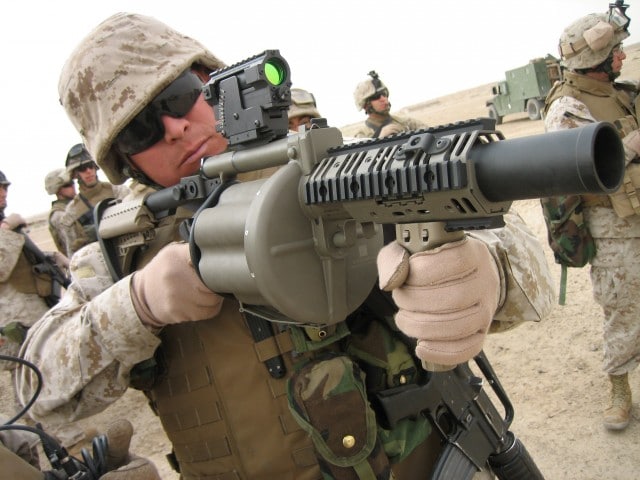 Riot control grenades take two basic forms, chemical and kinetic. Chemical grenades are designed to emit fumes that irritate or disable to the extent that they prevent persons from carrying out a chosen course of action, i.e. they quell rioters. The primary requirement demanded of such agents is that they irritate or disable, but also that they do no permanent damage. For many years, the chosen irritant agent in riot control  was tear gas, a relatively harmless substance that des little more than bring tears to the eyes and impart a general feeling of choking and helplessness. Tear gas  is now generally known as CN, but its proper chemical name is alpha chloroacetophenone.

The most significant failing of tear gas soon discovered once it had entered service as a riot.control agent was found to be that in the open area its vapour cloud generally dispersed so readily and so quickly that the tear gas  mist easily lost its disabling properties. Tear gas was also relatively easy to tolerate, especially after some experience of the substance and many fit young people could, therefore, carry on their disorderly activities after exposure to CN with only a minimum of inconvenience. Inside a building it was often another matter entirely as the wall, roof and floor of the building helped to contain the tear gas mist at a concentration that was still incapacitating, but in the open tear gas east soon seen to be relatively inefficient in its primary task as an anti-riot weapon. During the early 1950s, therefore, a new and more effective and persistent agent was demanded as a successor to tear gas. This led to the suggestion that e new chemical, rejoicing in the chemical name of orthocklorobenzalmalononltrile, be employed as an alternative to tearing gas with superior disabling capabilities. 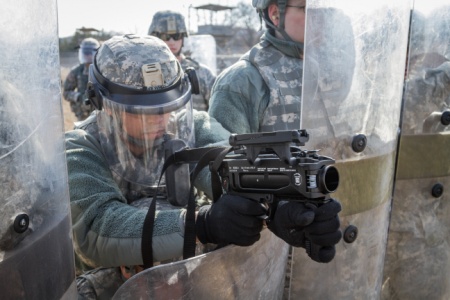 It was not long before this new substance was given the handier appellation CS. CS is normally a solid substance, but on contact with air forms a white or light grey vapour cloud with a general odour od pepper, and, for this reason, CS is sometimes known as pepper gas. He vapour can induce the usual tears, but with the addition of a general choking  sensation and a difficulty in breathing. The effect is distinctly unpleasant and experience has revealed that high concentrations of CS  can cause nausea and vomiting. To add to its effects, CS can be persistent, especially if vapour droplets adhere to clothing. CS is not totally disabling, however, and there are no long-term physical effects. CS was first used during the late 1950s and was soon found to be a remarkably efficient method of breaking up mobs. At first, the prime method of delivering the agent was the hand grenade, in exactly the same fashion that had been used previously for tear gas and smoke. While these grenades were easy to manufacture and use, they suffered from the same drawbacks as the earlier grenades: it took time for the vapour cloud to build up, range was limited by the strength of the thrower (who thereby came well into missile range of the offending crowd), and the grenades could readily be picked up by an adventurous rioter and thrown back. A redesign of the basic CS grenade has therefore taken place.

Modern CS grenades nearly all contain small multiple containers or pellets to emit the CS fumes. As it lands, the grenade body scatters these small containers or pellets (the British L11A1 grenade releases 23 pellets, for example) over a wide area, and the emission period is usually short so that any container or pellet thrown back by a rioter has little or no effect. The other design point is that it is now very rare for CS grenades to be thrown, for they are generally projected using a small propellant charge from a launcher to a range of 100 m (110 yards) or more the launcher usually being some type  of riot gun. When riot guns are used, the usual diameter of the grenade is 37-mm (1.456-in) but this is now generally regarded as being too small and the British army has opted for a grenade diameter of 66-mm (2.6-in) and uses a specialised launcher, the Grenade Discharger L1A1, rather than a riot gun to fire the grenade. CS is not the only modern form of the irritant agent, but it is certainly the type that is most widely used. Other irritant agents include mild hallucinogenic agents that impart a temporary feeling of panic or fear, but the use of such agent is disapproved by many on humanitarian grounds, and such weapons may thus be of the double-edged type, generating adverse publicity of more significance than any real advantage gained on basic riot-control terms. Moreover, some of these ‘mind’ agents have a nasty habit of being just as effective on their users as on their intended targets, even when a respirator is being used. Most police and para-military respirators are limited in their effectiveness, providing protection only against CS and CN, and some powerful modern agents could overcome the protective properties of such  equipment.

Humanitarian considerations also come to the fore when kinetic grenades are considered. These are usually the baton rounds or the infamous ‘rubber bullets’ that are used to disable by stunning. Kinetic projectiles of this type were first mooted during the 1950s, when it started to become clear to authorities in several countries that the last-ditch but yet effective control of riots demanded not conventional firearms, whose use would lead to severe wounds and deaths, and therefore to a mass of adverse publicity, but rather something that was more powerful than the standard irritant agents in use at that time. At first disabling missiles of several types were considered,  these ranging from lead shot in thick bags to heavy rubber rings. Such munitions were usually fired from ordinary riot guns, but  it was  not long before the baton round is its present form appeared. At first wooden projectiles were used, but these were soon discarded as they were prone to splintering and causing the type of nasty wounds that drew adverse publicity. Then for some time rubber was used before it was discovered that under certain circumstances rubber was also likely to cause injuries that were too severe. The current baton rounds are flat-ended PVC slugs that are not as heavy as rubber but are nonetheless likely to impart a powerful blow on the recipient.

It cannot be denied that baton rounds can and indeed to cause serius injuries if used at very close ranges, and have also caused a nnumber of deaths. They are also very inaccurate and often have to be used as area weapons rather than as point target weapons. But around of this type can prove effective in breaking up hostile crowds, and when used with extreme care they can even disable ringleaders of a riot or other troublesome individuals. They can certainly keep crowds out of hand-thrown missile range. Espite this, the use of baton rounds has often resulted in a great public outery against their employment. But in the absence of anything better the baton round is an established anti-riot munition.