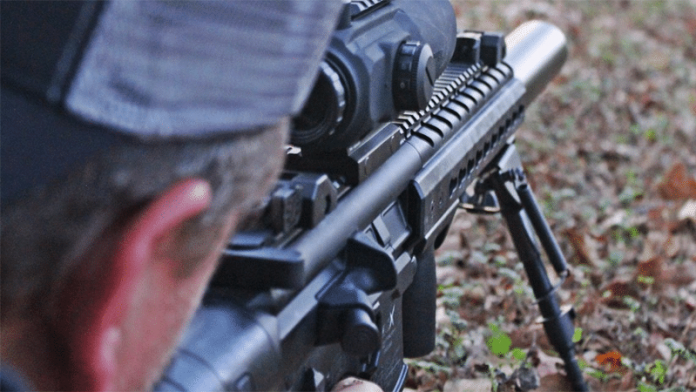 We have experienced a rise in airgun innovation and use. Most recently it’s been with a push towards larger calibers (a trend air rifle enthusiasts and hunters alike embrace). It’s also been with the chasm between low cost, lackluster performance and high price, big-bore precision seems to be widening. In an airgun nutshell, as cliché as it might sound, you generally get what you pay for. The Red Ryder, as cool as it might be, especially at $40, pales in comparison to today’s PCP offerings. Of course, this lopsided comparison further emphasizes polarized costs and performance.

So, where does a still-fragile economic climate leave cost-conscious consumers looking for a low-cost, high-quality shooting solution?

Enter the SIG Sauer Advanced Sport Pellet Airgun (ASP) Line. It includes “specifications and handling.” It parallels those of SIG’s popular, authentic firearms: P226 and P250 handguns, the MPX short-barreled rifle and popular MCX. SIG has even introduced ammo and accessories for its ASP line.

I’m a Marine Corps veteran with an affinity for “scary” black AR platform rifles and a soft spot for airguns. So I jumped at the chance to spend quality time with the .17-caliber SIG Sauer MCX ASP Rifle. After all, those who know me best would suggest my love of firearms of all kinds and fierce protective posture regarding our Second Amendment began with airguns. It’s just like America’s Western expansion began with Lewis and Clark’s expedition and their use of what experts generally agree was a Girandoni .46-caliber air rifle. History lessons aside, the question is, “How much bang for your customer’s buck does the SIG Sauer MCX ASP CO2 Air Rifle include?”

The MCX’s design and the $199 price tag makes it hard not to get excited, but it takes more than low cost to lure penny-pinching customers in for a close. They want premium shootability, maybe a cool accessory or two and some semblance of true firearm trigger time. The consumer dream purchase? Great quality, high-shooting volume, low cost, respected brand. The truth is, SIG answers all of these soundly with the MCX Air Rifle. SIG SAUER is protective of its brand.

The MCX’s quality must conform to SIG’s expectation with respect to increasing brand equity and contributing positively to the company’s reputation or risk tarnishing the good name – and it doesn’t take much to upset that balance in our industry. Some might suggest a low-cost firearm of any type bearing the SIG name could be risky; however, such reasoning suggests SIG works even harder to ensure the MCX doesn’t disappoint. And, in my estimation, based on SIG’s callout and my personal experience at this point, it doesn’t disappoint in either aesthetics or feel. True to SIG’s claim, it looks and feels like I’m carrying the real deal, with the exception of the heavy-duty polymer handguards. While the MCX incorporates some non-functioning details, such as a mock bolt-release lever, forward assist and dust cover, there are other features at least semi-functional, including the short-travel charging handle, selector switch and what appears to be an ambidextrous magazine-release button (but only the release button on the right side is operational). Surprisingly, the mix of a polymer stock and handguards with a rugged, anodized aluminum receiver and suppressor-like shroud concealing a 17.7-inch rifled barrel result in striking balance, great for effective trigger time and serious training in any shooting position. Unfortunately, the receiver is split vertically, with a left and right side, and doesn’t come apart.

The polymer handguard, while exceptionally rugged, may make attaching a keymod accessory mount more difficult. I had a tough time installing a Picatinny rail piece to the handguard because the groove in the keymod nut was narrow enough that sliding the mount forward in the keymod slots took some force; still, it wasn’t impossible and once installed, worked as reliably as you would expect from any keymod mounting system. The stock system was also quite comfortable. Because the stock houses the heart of the MCX, the CO2 canister used to power the rifle, it is not adjustable. However, even after I installed a Sightmark Wolfhound 6×44 Prismatic Sight (mostly for fun), the comb height and length of pull felt nice.

Admittedly, this may not be the case for every shooter. I did experience a more stable cheek weld while shooting with the included flip-up sights. I was able to literally sink into the stock and relax. The SIG SAUER MCX also includes a 20mm red dot or variable 1-4×24 tactical scope, but I upgraded to the Wolfhound immediately to test accuracy for grouping. Still, the inclusion of both fixed and a red-dot optic are worth conveying to value-hunting customers.

How Does It Shoot?

Prepping the MCX for a little precision plinking was fairly quick and easy. The ability to shoot a semi-automatic rifle without the need of an air tank or pump was refreshing. No need to break open or refill to 3,000 psi, just install the CO2 canister in the stock and get back to work. The polymer 30-round magazine operates with a pellet belt. The manual was well written and easy to follow, making removing the belt, loading pellets and re-installing it fast and easy. After a few shooting cycles, I was a pro. Learning the system well enough to help customers should take mere minutes. Using a charged CO2 canister and full magazine, I settled into a comfortable prone position.

SIG Sauer’s great-flying .177 pellets and the rifled barrel, I managed a sub 1-inch group at 30 yards. With the flip-up sights I managed 1¼-inch group at 25 yards and sub 2-inch group at 30 yards. Velocity fluctuates some, obviously, with the life of the CO2 cartridge in use. I shot numerous pellets at 700 fps, including many slightly over 700. Close performance that mirrored SIG’s specs impressed me. As a result of personal shooting experience, I would have no reservations about hunting small varmints with this particular system although SIG does not advocate such activity with the ASP line. Where confidence is critical to ethical hunting, my shots at varmints would likely remain within 30 yards, perhaps 40, depending on circumstances and continued practice, but no further.

From off-hand to prone, considering real-rifle weight, length of pull, comb height, etc., the rifle was incredibly comfortable to shoot. In fact, the only attributes your customers are likely to question are trigger weight and travel. At approximately 6 pounds, trigger weight is a bit heavier while travel is a bit longer than I prefer. When I questioned SIG, its response surprised me. To an extent, it effectively squashed my complaint with completely acceptable design logic. The heavier trigger pull is meant to resemble the real MCX. Understanding this purposeful explanation left me very little to complain about. The rifle feels good, shoots great and comes at a price point customers are sure to appreciate.

Even better, while it does have a premium air rifle feel both in handling and shooting, depending on your surroundings it may give customers the kind of backyard plinking opportunities that some of my most prized father/son memories are made of. Man, I wish this rifle was on the shelf back in the 70s!

In an industry chock full of low-end and high-end air rifles, enthusiasts are starving for mid-level air rifles. Especially when it comes to family fun, recruiting and educating new shooters.

The SIG Sauer MCX Air Rifle is available in black or flat dark earth (FDE). It includes open polymer/aluminum flip-up sights, a 30-round magazine and operation manual. Included are a registration card and one-year warranty. If you’re wondering if customers can expect a .177 bang for their bucks, they’ll get to enjoy 30 of them. When it comes to value, the SIG Sauer MCX is on target!