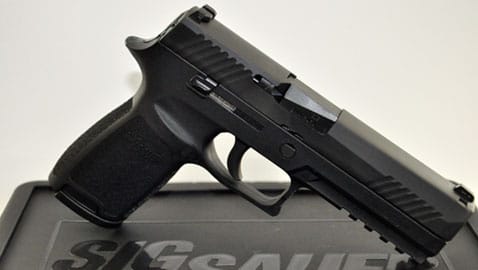 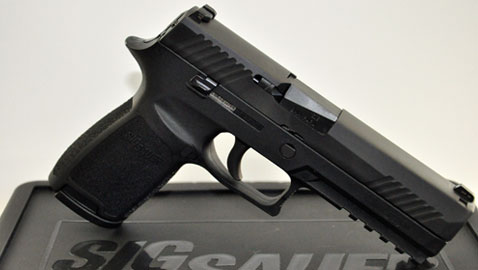 Range Day precedes the Shooting Hunting and Outdoor Trades (SHOT) show and provides the gun press an opportunity to fondle and shoot many of the new guns the manufacturers introduce at the annual event. This year the two most widely anticipated handguns were the 9mm Remington R51 and Sig Sauer P320. The differences in the way these pistols were presented to the press might have provided a more astute observer than I with a preview of what was to come. The R51 was conspicuously absent from range day while Sig rented a separate facility and filled the long firing line with every one of their products, including several samples of the P320. The R51 pistol, plagued with quality control issues and recalls, has turned into a public relations disaster for Remington while the Sig P320 may be the best service pistol on the market in the striker fired category. 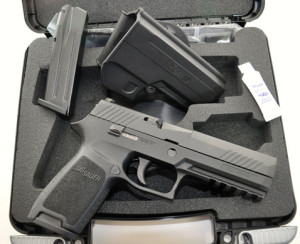 In fact, the P320 is so good it’s boring, and I mean that in the kindest way. The pistol functions reliably with every type of 9mm ammunition I have tried. No malfunctions, no drama, bang every time; boring. The pistol is more accurate than I can appreciate. Shooting steel plates off-hand at 50 yards is so easy it’s boring. The pistol is pleasant to shoot, has no sharp edges, low recoil and can be shot all day without any discomfort at all. No soreness, no blood; boring. The P320 is ridiculously easy to field strip and clean and you can take it apart without the drama associated with pulling the trigger; boring. The pistol comes in a lockable case with two 17 round magazines, a paddle holster suited to concealed carry and an excellent set of properly zeroed night sights. No need to search through catalogs looking for parts and accessories before heading to the range; this pistol is boringly ready right out of the box.

The P320 is the first of what will doubtless be a new line of striker fired Sig pistols. Sig likes to call it a polymer-framed, striker-fired duty pistol and it doesn’t take much imagination to figure out Sig is challenging Glock for their share of the law enforcement firearms market with this new handgun. To do so, Sig has gone straight to the heart of the matter in the design and advertising of the P320 by emphasizing the two biggest criticisms of the Glock design. The first, firing out of battery, has haunted Glock for years. Despite assurances that their pistols will not, under any circumstances, fire if the slide is not fully forward and locked up (in battery) reports of KaBooms, as they are called, persist. Sig has addressed this in the P320 by emphasizing their pistol is equipped with a “disconnector safety” that prevents firing if the pistol is out of battery.

The second issue Sig is going head to head with Glock over is the matter of safety. While adherence to basic safety and gun handling rules will prevent this, people keep shooting themselves or others while disassembling Glocks. The design requires pulling the trigger to unlock the action before the slide can be removed and some folks can’t seem to understand you should ensure a pistol you are about to take apart is unloaded and pointed in a safe direction when the trigger is pressed. Is this a fault with the Glock? No, it’s a training issue, but Sig has addressed it with a three-part safety routine that has to be followed to field strip the pistol: First, the magazine must be removed, second, the slide has to be locked to the rear (ejecting any round in the chamber and allowing visual and physical inspection) and, third, the trigger does not have to be pulled to unlock the action. Turning the disassembly lever to the down position while the slide is locked to the rear allows the slide to be removed. 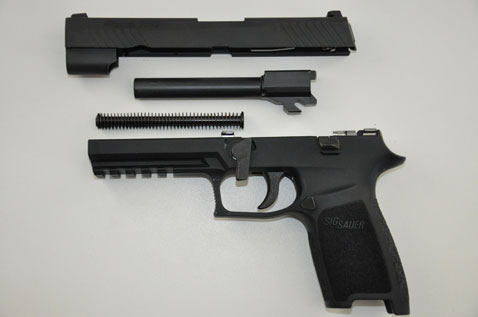 Since we’re talking about takedown, we should discuss removing the chassis. The grip module is what Sig calls the part most of us would refer to as the frame; the part we are accustomed to being the “firearm” under federal law and requiring a serial number. The Sig system is completely different – the grip module is an inexpensive polymer part that can be exchanged for small, medium and large grip versions to fit different hand sizes. The action of the pistol is contained in the serial numbered part called a chassis and it can be removed from the grip module for cleaning or swapping out with another by removing the takedown lever. All this is covered in the instruction manual so I won’t go into it further, except to say it can be accomplished much more quickly than it takes to describe. The serial number of the P320 is visible through a window in the right side of the grip module that lets you see it stamped there on the “firearm” – the chassis. 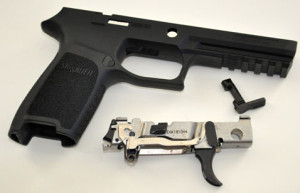 The P320 is a full-size service pistol, weighing 28.4 ounces empty and 36 ounces loaded with 17 rounds in the magazine and one in the chamber. The trigger is available with a smooth face or with a safety lever for those who might want that feature. My sample pistol has the smooth trigger and according to my Lyman electronic trigger pull gauge the trigger breaks at an average of 7 pounds, 4 ounces. That sounds kind of heavy but it feels much different. After a bit of take-up the trigger feels as though it stops or stacks until sufficient pressure is achieved, then it breaks crisply. The trigger reset is short and positive, exactly the way it should be. After measuring the trigger pull I thought shooting the P320 might be a challenge, but like I said, it’s so easy it’s boring.

What’s the role of this pistol? As a challenger to Glock and Smith and Wesson in the law enforcement arena it’s going to be hard to beat. The basic pistol can be reconfigured to fit various hand sizes, or from a full size to a compact model, and can be simply converted from 9mm to .40 S&W or .357 Sig calibers. A .45ACP version is in the works. The grip module includes a rail for the attachment of lights and lasers and, the only thing I don’t like about the pistol, a hooked trigger guard. As a pistol for concealed carry the P320 is too big and heavy for deep cover but can easily be carried with the right holster and clothing. During my latest range session at Gunsite with the P320 I had a flash of brilliance – rare for me, I admit – and realized this would be the perfect pistol to use for a week long class at the school. It’s completely reliable, accurate and easy to shoot, won’t tear up your hands and won’t cause any undue excitement. It’s boring, and it’s very, very good at it.

Ed Head is a regular on Shooting Gallery, Gun Stories and Down Range TV. He has worked for almost 30 years in law enforcement, first in the United States Air Force and then with the United States Border Patrol, retiring as a Field Operations Supervisor. During his Border Patrol career, Ed worked in a variety of patrol, investigative and training capacities. Ed has an extensive background as a firearms instructor, having trained thousands, ranging from beginners to police, military and special operations personnel. Having taught at Gunsite for 20 years, Ed first trained there under the world famous shooting school’s founder, Jeff Cooper, then later ran the school as the operations manager for more than five years. Ed lives in Chino Valley, Arizona, where he continues to teach and write.