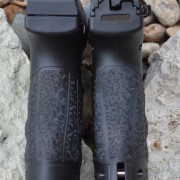 As noted in my previous giddy review of the Walther PPQ M2, that gun is without question my favorite production compact pistol loaded with all the custom features already included. In short, I love the PPQ M2 design. Ambi-slide releases, reversible mag releases for lefties, match grade barrel, outstanding ergonomics, light rail, custom look and serration, and a grip which seems magically custom molded to my hand. The trigger is also amazing, which leads us to the PPQ M2 .22LR, which has an equally amazing trigger in an identical copy of the PPQ M2 9mm. What? That’s crazy — a .22LR version of a full caliber pistol without a 17lb trigger pull in a weight, feel, and finish that is identical to the full bore version – Yes, Mrs Jackson, it is for real. Forgive my bluntness, but generally most .22LR copies/analogs of the real pistol or rifle suck. Usually the weight is way off, the trigger is substantially heavier, and the quality usually is substantially different than the original full bore version. In most cases they feel like a downsized lightweight kids version of the gun with a trigger pull that a WWF wrestler would have a hard time pulling.

In the case of the PPQ M2, it is a stunning example of what a manufacturer can do when they stop tinkering and just copy a great defensive caliber design into .22LR. It feels, looks, and operates just like the PPQ M2 in 9mm. The only very minor differences are a 0.7lb lighter trigger feel in the .22LR and 0.1lb weight difference when empty. Due to the single stack design, the capacity is also reduced to only 12-rounds in the .22LR version, but in practice it makes little difference to me.

I was a little short on the spy training requires the trigger pull difference between a 5.6lb on the 9mm vs a 4.9lb trigger on the .22LR. It seemed identical to me. In almost all .22LR pistol analogs, the triggers are usually considerably heavier, but in this case the PPQ M2 is actually a tad lighter than the original. The 0.1lb weight difference is also un-noticeable between the unloaded guns, but loaded the weight varies greatly with a stack of fifteen 9mm 124gr rounds loaded in the 9mm PPQ M2. With eyes open or closed, your hands cannot tell the difference between the two without looking at the size of the hole in the end of the barrel or kicking out the magazine.

My other annoyance with most .22LR “versions” of full caliber pistols is that they usually require premium hyper-velocity .22LR ammo to function reliably. In the case of the PPQ M2 .22LR, it cycles perfectly with anything from standard velocity to hyper velocity rounds.

During the recent great American ammo shortage, I was able to still test several Lapua, SSK, and CCI standard velocity rounds as well as a wide variety of high velocity .22LR rounds from CCI, Federal, and Winchester. CCI Mini-Mags, Velociter all performed perfectly as well as the new 325-round Federal Fresh Fire (bulk) Packs. I starting having some feeding issues around the 500 round mark, but I have the same issues on my Ruger Mark III (the pinnacle of .22LR pistol reliability) without a brief range lubing. This tells me the Walther PPQ M2 .22LR pistol is a very reliable and extremely comparable to the famously reliable Ruger Mark III. A squirt of oil on the range to break the .22LR buildup and the PPQ M2 .22LR pistol starts humming again.

During a recent shopping trip, I scored two boxes of Federal 550 bulk ammo packs. Around a box and a half was fired with this ammo through the Walther PPQ M2 .22LR in just one session after an especially stressful week. There I sat for over two hours banging away on my Action Target steels and some helpless golf balls while sitting on my tailgate. Sure, its an incredible analog for training, but for simply the price of two bulk packs of .22LR ammo, it was worth $600 worth of therapy for me that day being just a fun way to plink away some worries and stress on a beautiful afternoon.

During that plinking session, I did have to give the gun a squirt here and there with some WD40 to clean up the 22LR crud, but as I noted above it performed on par with my Ruger Mark II and Mark III pistols. Impressive considering it looks and feels like a full sized 9mm and I had a wonderful time just plinking away.

The Walther PPQ M2 .22LR also delivered great accuracy at 10-yards; I could easily keep all my groups within a dime-sized group. At 25-yards, 1” groups were doable off the sandbags with high quality match ammo and a clean pistol. Could it be a great hunting pistol as well as a plinker and trainer? You betcha!

Like any pistol it had its favorite rounds. In this case it really liked the CCI Standard Velocity and the Hyper Velocity Velociter ammo from an accuracy perspective with my best groups from those two rounds.

The only real, “gotcha” for me has been the availability of spare magazines, as the gun comes equipped with one only magazine. I believe that it should be mandatory that every gun come with at least two magazines, after all you can’t even practice a speed-load. I had put of this review in hopes to acquire a few spare mags for reload testing. As of the review, I am still waiting for spare magazines to hit the market and hoping they will not be the same high price as my beloved PPQ M2 9mm magazines.

For around $390 on the street, the PPQ M2 .22LR delivers reliability, precision and one of the few .22LR analogs which actually works with a wide variety of ammo while delivering the realism of the real thing.

I think Walther is missing a potential marketing opportunity to package these as a single box set with three mags each a holster and dual mag pouch. They would likely sell truckloads of them to both new and old shooters.

Sadly, locating any substantial information regarding the PPQ M2 .22LR on Walther’s site is an effort in futility with only one little sputter of info at the bottom of the PPQ M2 full caliber page. Hopefully they will get this updated soon.

Add in the obvious little benefits of sharing the same holster with its 9mm big brother and you have a perfect compliment to the 9mm and one heck of a stand alone .22LR pistol.

This was the first .22LR pistol which actually had me considering selling a couple of my Ruger Mark III pistols, after all I can train with it and even bag a few squirrels, coons, and rabbits during hunting season. All around a spectacular little pistol.