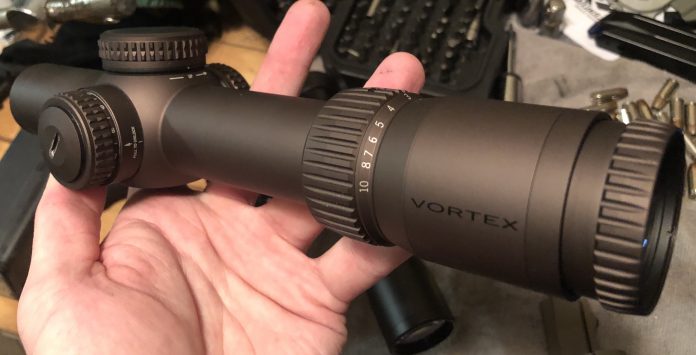 Vortex Optics has the most exciting product of SHOT Show 2020, the Razor HD Gen III 1-10x.

I got my hands on it. Thank you Steve Fisher.

This has been an quiet lead up to SHOT. Usually this time is filled with product drops, and new announcements, and all the new year new tech insanity. This year it’s toned quite down (for now). New products are coming through the pipelines but very little is ‘New‘. We aren’t in the development swing the late 2000’s brought that gave us the SCAR, ACR, and their competition. The NGSW is still running but I think we’re very early and have been burned once to often for excitement to manifest beyond the theoretical.

Vortex Made Noise in that quiet

The Razor HD Gen III is new. It is exciting as a leap in the technology standards. A 1-10x Daylight Bright Low Power Variable Optic.

Finally.. This is what we’ve been waiting for…

I’m not going to dig deep into the Gen II history, but Vortex set the standard for what a 1-6x should do. Some of the most successful optics since then have emulated that. Clear, light, simple, bright, and durable. The Gen II has seen combat overseas with SOCOM and remained an industry leading standard here at home among demanding shooters.

But the Razor HD Gen III sets a new standard, one that I will be curious how companies strive to match.

What they gave us was the Razor LPVO, and they’re doing it again. Better.

They housed the Gen III in a 34mm tube. Not a one off size with little mount or scope ring support. Vortex is giving us the same length and same weight Razor, in an widely supported mount/ring size, that can drop into the same place as the previous LPVO. Every worthwhile mount comes in equivalent 30mm/34mm layouts.

Yes. Really. Front Focal Plane Daylight Bright. The struggle for every single optic manufacturer in the LPVO market has been designing a reticle system that will illuminate like a red dot sight.

That is the measure of ‘Daylight Bright’. It contrasts like a red dot. Not ‘you can kinda see red’ in the reticle on maximum brightness.

Most manufacturers up to this point have disappointed us repeatedly with their FFP offerings that claimed to be ‘Daylight Bright’. It’s understandable, the size of a FFP reticle in high magnification erector optics leaves almost no surface to work at illuminating. Most manufacturers had settled for contrasting illumination. The EOTech VUDU 1-6x FFP is an excellent example of contrasting illumination done well, but it isn’t ‘Daylight Bright’. EOTech’s 1-8x is, but it is Second Focal Plane.

The Razor HD Gen III has red dot contrast in the First Focal Plane. It does what the second focal plane LPVOs up to this point held dominion over, it can function in the red dot role. FFP optics have needed to rely on good reticle design, unilluminated, to carry them at 1x, which as a consequence made the reticles thick at maximum magnification.

The illumination doesn’t vanish at off angles, something otherwise bright front focal plane scopes struggled with in the past. The useable daylight settings aren’t limited to the top 1 or 2. Setting 6 of 11 is useable in daylight, just like an Aimpoint, RMR, or other quality dot. You aren’t left clicking through nearly a dozen brightness levels you will never use.

The illumination dial itself is a lockable turret with off settings in between each brightness. Just pull the knob around the battery housing (CR2032), pick your setting, push the knob to lock it. The Razor HD Gen III won’t turn off or change brightness inadvertently, another common concern on certain exposed control styles.

The battery life is rumored to be exceptional. I have no confirmation, but 200 hours is the anecdotal estimate for setting 11, with several times that life as you go down to the everyday use numbers.

10,000 hours or functionally 1 year? Maybe setting 6 or 7. But I know I would’ve killed most of my other LPVO’s batteries by now.

The Enhanced Battle Reticle is either Minute of Angle (MOA) or Milliradian (MRAD) pattern, Vortex is doing both for user needs. The EBR center dot is 1 MOA, the 4 illuminatable segments around the center dot encircle a ~4 MOA space and the outer diameter is 5.5 MOA.

At lower magnification the Razor HD Gen III operates like a 4 MOA red dot sight, not dissimilar to an M68 CCO/Comp Series Aimpoint.

The reticle features a quick range estimation scale to 600 yards at the 12 o’clock position and is cleanly marked to 32 MOA at 3, 6, and 9 o’clock. Quick holdovers out to roughly ~650 yards and wind leads for up to a 20 MPH crosswind are scaled under the reticle. The BDC is calculated for 5.56/.223 in 55gr-77gr at M4-M16 muzzle velocities and is useable with 168-175gr 7.62/.308 loads. As with all BDC’s the further you vary from the muzzle velocity and ballistic coefficient in the glass, the further off from the BDC the impacts will be. The reticle design will lend itself to very quick live fire corrections as the shooter or a spotter tracks impacts.

The Razor HD Gen III features all the etched-in functionality of an ACOG variant, the CQB flexibility of an red dot, and the full observational capabilities of a DMR variable optic. It manages to do that without cluttering the whole viewing window with hash marks. The full reticle breakdown is here.

Like the Gen II, the Razor HD Gen III features large cap-protected turrets for control surfaces. The caps, like the locking illumination dial, protect a change from being inadvertently thrown into the optic by hitting a dial on gear or environmental obstacles… like VTAC barriers… but who uses those, right?

The turrets themselves have enough tension to prevent most inadvertent changes, having the top turret exposed to throw a more precise range adjustment in for a longer shot is eminently doable. That’s also, if I recall correctly, a requested feature of the LPVO military optic solicitations along with multiple reticle options.

If you’ve shot a Razor Gen II, or another excellent LPVO, you know. The experiences translate but the capabilities are increased.

With the transition to front focal plane, greater accuracy in observation and measurement metrics is both possible and simplified. The increase to 10x maximum magnification allows target identification and discrimination at greater distances and makes detailed observations at current distances easier. Going by the rough estimate that you want 1x of magnification per 50 yards to the target for detailed observation, and 1x per 100 yards for basic observation, the Razor HD Gen III can cover every tactical rifle in current calibers to great effect. Even rifles in 6.5 Creedmoor or the developmental 6.8mm are going to have incredible observation and engagement capability underneath a Gen III.

The glass clarity is top notch. ‘Edge to edge’ is thrown around a lot, but the Razor gives us an optic that has a forgiving eyebox that doesn’t give distract you with fisheye and scope shadow. The illumination doesn’t vanish if you’re outside the ideal eyebox. Lens selection, combined with the 100 yard fixed parallax, still delivers very minimal distortion at close distances on 1x. Even as close as 2 yards the center of of the optic provides a clear sight picture, with the only notable distortion as the image crosses the edges of the viewing window. Compared to the RMR at the same distance the Razor delivers less distortion, as the RMR is very slightly magnified due to lens geometry.

At higher magnifications the eyebox behind the Gen III tightens, as all variable optics do, but it accomplishes this without shifting the eye relief. Even at 10x the scope will snap up and present an easy to acquire sight picture, aided by the illuminated center.

The Razor HD Gen III is, like its predecessor, setting a new capability standard for what a general purpose rifle optic can be expected to do. It combines what previously required 3 different optics, ostensibly on 3 different rifles, and has merged that capability into one optic. A Gen III allows whatever rifle its riding on to operate as a 1x CQB RDS platform, a moderate zoom 2-4x where the ACOGs comfortably sat, and as a DMR optic more capable than what any previous scopes could offer.

This flexibility in role will allow users, especially those in a team environment, to fill the role needed on demand and not shuffle to the team member who’s carrying the special gun. The individual user can ask their rifle to perform within its full effective range of capability and distance.

I suspect this, or a close variant of, to be submitted into all three military optic trials.