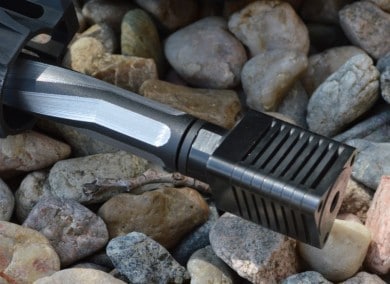 I love to try new products, new ideas, and new manufacturers. In this build I attempted to showcase a number of those new ideas from the front to the back of the rifle. The result is one uniquely forward looking rifle which looks awesome and shoots great.

From the interesting looking muzzle brake to the Mission First grey Minimalist buttstock, there are a number of manufacturers who are making AR-15 performance products that are different than the expected Mil-Spec norm. Some purport to deliver performance upgrades, others look cool, and others add features the AR-15 never had or take away something the AR-15 has had for a long time.

I started with Aero Precision’s unique No-Forward Assist upper. This is a unique product in the industry which actually takes away a classic AR-15 function that some folks such as myself are pretty excited about it — they removed the forward assist. The forward assist did not exist on very early M16s, but due to reliability was added to assure rounds made it in the chamber.

There are heated debates on whether the forward bolt assist mechanism is a relevant feature any longer. It was initially added as a solution to solve of the early ammo woes experienced in the Vietnam war. The thought was that if you could get a round in the chamber it would blow out and kinda self clean the gun until the next lull in shooting caused the in-barrel powder residue to cause feeding and functioning issues again. The military did at one time teach to hit the forward assist after each reload to assure the first round from the mag was definitely in the chamber. Most of the military guys I know say this is not the case any longer.

The very few times I have used the forward assist just left me swearing with some out of spec inexpensive steel cased ammo. It pushed the rounds in the chamber, but I ended up jack hammering the AR-15 on the ground to free the now jammed rounds after detonation. Sure, in some very extreme situations the forward assist can help keep an insanely dirty AR-15 shooting even if there is damage or gunk preventing normal cycling. My opinion is if a normal Condition 1 or Condition 2 failure clearing drill does not re-enable firearm operation, there is something serious wrong which requires disassembly.

I am not alone in my complete non-use of the forward assist. The current industry best practice for misfeeding rounds is not to hit the forward assist, but instead to get that damn round the hell out of the gun and put a round in that will cycle. So Aero Precision asked the question “Do we really need a forward assist if no one is using it?”

Customers surveys on the company’s Facebook page indicated that a mil-spec upper without the forward assist would be a great product as long as they kep the ejection port cover, and they whipped out the CAD eraser tool and removed the forward assist milling process. The upper is cleaner looking and of course shaves it ounces from the weight of the upper — all great things if you never use the forward assist.

Another AP innovation is their Mil-Spec compatible AR-15 Ambi Lower receiver designed around the Battle Arms Development Short Throw Ambi-Selector Switch (abbreviated B.A.D. A.S.S.) Aero Precision’s design adds a right hand trigger finger bolt release/catch control paddle which is proprietary to the AP Ambi lower design. The index finger can simply reach up after dropping the mag and be ready to release the bolt when the fresh mag is inserted. If you are a lefty, this delivers right side controls to drop the bolt after reloading. Aero’s Ambi-lower is probably one of the cleanest and least expensive ambi-lowers I have tested without jumping into custom billet price ranges.

Aero went a step further into the custom lower receiver realm by making their forged Ambi-Lower pictograms which align to the B.A.D. A.S.S. short throw ambi-Selector switch. This selector adds ambi-controls to the right hand of the receiver and features a short 45 degree throw to speed selector switch operation. Beyond that, the AP Ambi-Lower is just like any other top shelf Mil-Spec AR-15 Forged lower receiver. $165 with Ambi-Bolt release + BAD-ASS Ambi-Selector $85. The receiver is also compatible with any standard ambi-magazine release control available as well.

This ain’t your daddy’s carrier. Primary Weapons Systems decided to offer a version of its carrier used in the PWS MK1 rifle famous for reliability but in a direct impingement version.

The PWS Enhanced DI carrier is made from tool steel, isonite QPQ treated for durability. The DI carrier has increased carrier mass to extend dwell time and delay unlock to allow chamber pressure to be greatly reduced for easier extraction. They have placed strategic gaps and channels between skid pads to allow for fewer points of contact to deliver smoother cycling and less friction even though the carrier is overall a little heavier. It not only looks different, but feels a little different cycling as well. The PWS Billet Buffer Tube is machined from one piece of 6061 aircraft-grade aluminum and packs more features into the PWS buffer tube. The tube eliminates the the castle nut, and it adds a unique indexing screw and plate system that ensures precise alignment of the buffer tube. It also features a lip that extends into the receiver to support the carrier, and integrated QD attachments are machined directly into the aluminum for durability and weight savings. Some fluting on the tube creating channels for debris, and it also features a nickel Teflon coating, 4140 steel, and several drain holes to allow water to escape the system. Innovative? You Betcha!