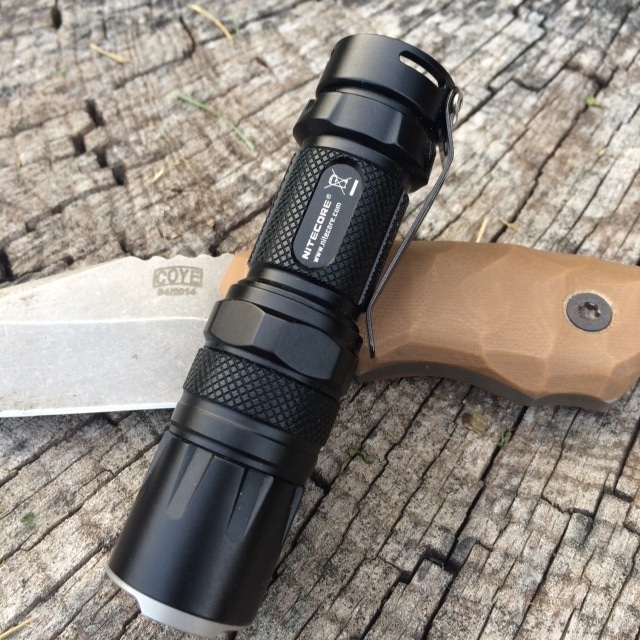 It’s been said that we have a serious addiction problem. On top of all the expensive scotch, fine cigars and dubious dancing moms at Nancy’s Squat N’ Gobble (the best damn strip club / breakfast joint in the country) we are also addicted to buying flashlights. Now many of you know about this already, and you have probably read some of our flashlight reviews in the past. (here is one, here is another, there’s this one and here’s another) We love flashlights and obsessively buy them. So yeah, you are gonna hear about each and every one we get.

Recently we were visiting our friends in Virginia, and stopped by Fortis, a firearms dealer that specializes in military and LE sales. They had a shelf full of NITECORE Flashlights, and we inquired about the brand since we aren’t terribly familiar with the company. Joel (Fortis’s main sales manager and former Air Force MWD dog handler) broke out the lights and covered their various features. One light in particular grabbed out attention: the NITECORE SRT 3 Defender.

The SRT 3 Defender light is a very small, everyday carry/everyday ready – sized tactical flashlight that runs on a single CR123 lithium or AA battery. We like adaptable designs, so that was a selling point right off the bat. The “SRT” part of the name stands for “SmartRing Tactical” and the light lives up to its name. the little light offers a max output of 550 lumens when using a CR123 in “turbo” mode, and 180 lumens with a standard AA battery. With its easy to adjust ring selector, you can choose one of its many modes.

The modes are easily and quickly selected by rotating the selector ring clockwise or counter-clockwise. The light has a guarded, recessed power switch in the rear of the unit, which provides momentary illumination with a partial press or constant on by “clicking” all the way in. because the pressure pad is recessed, you can balance the light on its tail cap to illuminate a room or tent for hands free work. With it’s removable pocket clip, strike-bezel front and short 3.9” overall length, the SRT 3 seems to be a good pick as a EDC task light. The unit is waterproof to 2 full meters, and highly drop resistant do to its aluminum construction and CREE XM-L2 LED bulb. We have been carrying and using the SRT3 daily for several weeks now, and have managed to drop it on concrete at least a dozen times and into several nasty mud puddles. Used out in the pouring rain at night, the 550 lumens cut through the darkness impressively well, even in a downpour. The “police mode” is a little hokey, but we like the “SOS” feature should we get lost in the wilderness and the ability to “custom tune” the level of output. You don’t need 550 lumens to find your key slot, but its nice to have for defensive/ target identification application.

The soft red light mode is the PERFECT amount of light for military tasks like checking your map, gear or getting small items out of your ruck. To be honest, it’s one of our favorite features of the light. Previously we have used small head lamps for this, or a key-chain sized red LED light clipped to a uniform buttonhole or MOLLE loop to check our gear outside the wire. As a result of carrying one light for one unique task, often it would become more than just “2 is 1, 1 is none”. It meant we would have like three or four different lights throughout our load out. So the versatility is definitely a plus for sure. As much as it pains us to say, the light is made in China. But in all fairness, we have Chinese “tactical” flashlights that have survived multiple deployments overseas and are still going strong. It’s not necessarily fair to write Chinese built lights off as crap, some companies do a better job than others. Shit, even the Germans import pretzels from America! Regardless of its point of origin we like its layout and features. It would be nice if the slip ring mode selector had more resistance in adjustment, as it slides too easily to trust staying on the setting to it’s placed it. You don’t want to pull the light out expecting low-light red, only to blast the countryside with 550 lumens because the ring slipped in your pocket or pouch! Another thing we dislike is that “strobe” is the last setting, as opposed of “turbo.” We carry the light set at its brightest setting (turbo) but fear we might be surprised to employ it on strobe by accident. Obviously paying attention to our gear and its configuration will prevent white-light ND’s and SNAFUs. Operator Error still is the most common cause of problems in any system, but a modification to the series would make an ND less likely.

Read more about the SRT3 here, and make sure you check out the website to view the company’s product line. It’s a little early to give the light our complete stamp of approval, but so far it’s definitely our favorite economy class task light /EDC light.

Via:: Review – the NITECORE SRT 3 Flashlight