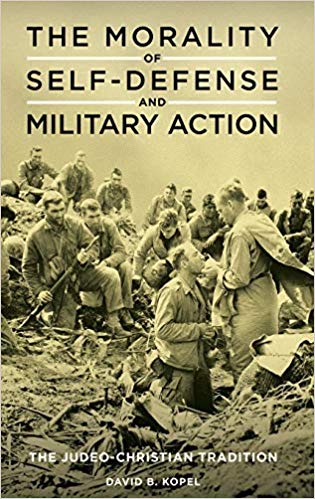 When this book came out in 2017, I was eager to read and review it. David Kopel is a colleague whose work I have admired for years. This is his magnum opus (so far anyway). No one knows more about the legal aspects and history of the Second Amendment and the natural rights that underpin it. I said I’d review it then, so this is a promise greatly deferred but finally kept.

The Morality of Self-Defense and Military Action is a history of moral thought and belief. That may sound esoteric, but these are precisely the factors that most motivate self-defense advocates. DRGO, John Lott, Gary Kleck and many other research experts spend our time refining the scientific case for general civilian self-defense right on outcome bases. But we do that because we believe in the fundamental right of each person to possess the best tools with which to exercise that right.

Most ethical thought in Western civilization has scriptural bases (Old and then New Testament) with strong influence by Classical philosophers. This is what Kopel surveys, in depth, in 400+ pages with surely a thousand footnotes.

There is no doubt that the ancient Hebrews believed in the sanctity of both defense and offense in order to conquer their promised lands. But their might eventually failed to keep those lands, when the Assyrians eliminated the northern Hebrew kingdom of Israel (whose 10 tribes disappeared to history) then the Babylonians captured and removed the two remaining southern tribes of the kingdom of Judea (from which “Jew” derives). The right of defense guarantees nothing in a world with strong enemies.

This principle has been taken up in the Christian world as belief in “just war”, which Kopel thoughtfully analyzes. Generally, offensive wars are condemned while defensive wars are accepted as unavoidable and necessary. Throughout the ages, peoples have migrated and found their place in lands new to them by defeating and displacing previous residents. By the 20th century, the idea that one’s people deserve more lebensraum at the cost of others’ freedom had passed its prime.

But defining the difference can be tricky. How recent must the provocation be to justify defensive action? The Middle East offers classic examples. The peoples that the Hebrews displaced are long gone, but does their early presence and ethnic continuity validate their displacing Arabic speaking Muslims who established their dominance centuries following the Jewish diaspora? Were the Crusades aggression as depicted by Muslim chroniclers, or were they righteous attempts to recover long Christian lands that were earlier overrun by Mohammed’s followers?

Underlying the degree to which civilizational and national defensive war is moral is the eternal question about when personal, individual self-defense is valid. Again, the ancients found little question about this. The Mosaic Ten Commandments include an injunction to “not murder”, not to “not kill” in accurate translation. The Hebrew Bible and Torah include a number of examples showing when one is not just entitled, but has the duty to defend oneself, one’s home and one’s people. The rules can get complicated (you can kill an intruder at night, though not necessarily during the day) but cover the most salient circumstances.

As Christianity became dominant, with its repeated divisions over the past two millennia, we see more pacifist interpretations of Scripture develop. There seemed to be more support in the New Testament for this than the Old. From Gnostics to Quakers (with their rich contribution to American life) and even Presbyterians and Methodists, “purity pacifism” is a strong tradition influencing significant strains of political thought. Spreading the Gospel was at first a more peaceful program than later conjoined conquests of Christian powers over indigenous and of Arabs carrying Islam through much of the old Roman Empire. Christianity’s many martyrs literally testified to that. Nor did it work out well for non-Christians, for example, the Maororis of the Chatham Islands or the Arawaks versus the Caribs.

“Pragmatic pacifism” has more widespread influence. To “turn the other cheek” to an aggressor is one thing, and forgiving “seventy times seven” is a great deal—yet is still a limit (Matthew 5:38 & 18:21). Taking the Good News to all still may require that the messengers carry a sword” (Luke 22:36)—but for what, if not self-defense? In his introduction, Kopel describes how William Jennings “Bryan asked [famous pacifist] Tolstoy what Tolstoy would do if he saw a criminal about to rape and murder a child.” That is the same question that the slightest curiosity about the parable of the Good Samaritan raises. What should the Samaritan have done if he had come across the victim as he was being assaulted?

Philosophies of non-violence may or may not admit of self-defense, with adherents on both sides. Gandhi was a pacifist through and through, while Martin Luther King, Jr., who was inspired by Gandhi, still found self-defense fully justifiable. Non-violent action has clearly been more effective in achieving societal and political change than individual security.

All this is to say that this is an enormous subject, one that Kopel examines thoroughly, in great detail yet very readably. If you appreciate learning from an expert discussion despite the ultimate ambiguity necessitated in respecting different interpretations of historical premises, you’ll want to read this through. If you want to know everything there is that supports a position in favor of the ideals of principled, pragmatic self-defense, you’ll really value this.

There is nothing else out there as authoritative and extensive as Kopel’s Morality of Self-Defense. It is, simply, without compare. Learn, and enjoy!