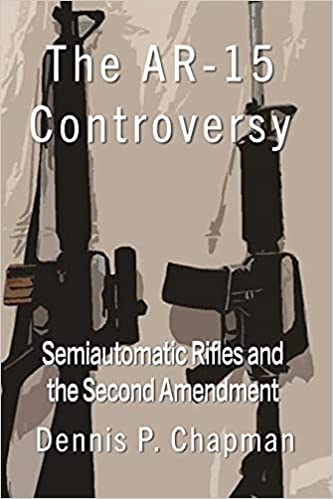 Dennis Chapman, an attorney by trade and retired Army infantry colonel who served in Somalia and Iraq, became frustrated by the assumptions activists make about this nearly ideal civilian rifle. He began examining those assumptions, collecting his observations and his findings, intending to write a law review article summarizing them. He did, in the Belmont Law Review (‘Firearms Chimera: The Counter Productive Campaign to Ban the AR-15 Rifle’) but realized the subject was vaster than the 36 pages he could publish there.

The AR-15 Controversy: Semiautomatic Rifles and the Second Amendment is the result. Since the main (and too much intended) confusion is with the military’s M16 series rifles, Chapman’s professional experience gives him credibility that politically motivated gun phobes can never have. I’ve not referenced any of the below information or studies, because you’ll find those details in Chapman’s hundreds of footnotes, page by page.

AR-15s are, simply, the current peak of the art and craft of the semi-automatic long rifle. This is a timely moment in history to get in our hands the full story of the AR, and how its value fits ours.

As we know, semi-automatic firearms loaded with multiple rounds have been in existence since the 1600’s. Rifled barrels have been around since before the American Revolution. Stocks (“hand guards”, “barrel shrouds”) have always been used to provide secure a grip that keeps hands off hot barrels. “Pistol grips”, obviously, have existed as long as handguns have been made and their application to rifles, like adjustable stocks, make them easier to manage for all sizes and shapes of shooters. In other words, all but one of the hated features of the “ARmalite “style rifles are entirely innocent and represent the logical progression of good firearm design.

The single feature that discriminates between Chapman’s “professional” military assault rifle and his modern civilian one is automatic firing (pressing the trigger once and holding it to fire multiple shots). Currently marketed civilian firearms don’t do this. Bayonet mounts have detractors, but as no one has ever been charged with assault or murder by fixed bayonet, they scarcely count.

Exaggeration and lies are common stratagems of anti-gun activists; for example, claiming the AR-15 can “spray” bullets at a rate of 700 rounds per minute. Chapman’s discussion of this issue is illuminating. That’s the theoretical maximum rate for fully automatic fire (not the AR-15), but over one minute even the AR-15/M16 mechanism can only be trusted to push rounds through at a rate of 150-200 rounds. Meanwhile, the AR-15’s semi-automatic action (otherwise identical to the AR-16’s) limits fire to about 60 rounds per minute. And either one’s sustained rate of fire tops out at 12-15 rounds per minute, or the heat generated will ruin first, accuracy and, next, the rifle.

Excitable hoplophobes target “Large Capacity Magazines” (meaning to them, more than 10-rounds’ capacity) for extinction along with these dread “assault rifles”. And while a number of mass killers have used magazines of greater than 10 rounds in AR’s or pistols, the majority have gotten by without them. With all due respect to those who have been lost, less than 1% of shooting victims fall to mass shooters, so this can’t be said to be a huge public policy problem, particularly since they typically happen by surprise in supposed “gun-free zones”.

Studies Chapman quotes show that inexperienced shooters can fire 20 rounds from a single magazine only 2 seconds faster (12.3) than from two 10 round magazines (14.6). 2.3 seconds for an amateur to change a magazine and charge an AR (there is no difference for experienced shooters) does not aid the intended victims. Mass shooters take longer than 2 seconds on average between shots anyway. And the faster anyone fires, the less accurate they are.

Chapman reviews many court cases, ones we’ve heard of and plenty we haven’t. An interesting element is the tug of war between those who think the Second Amendment protects only arms for militias (therefore, actual weapons of war?!) and those who abide by Heller and McDonald in accepting the legal protection of civilian ownership of firearms in common use. This absolutely includes handguns, the most common firearms by far used in crime and necessarily must, due to their popularity, AR-style semi-automatic rifles.

He points out research that shows that revolvers are used in equal proportion to magazine-fed handguns in crime. Assailants using revolvers do fire fewer rounds than those using handguns—2 or 3, compared to 3 or 4. That doesn’t make nearly the difference that having extra rounds in your handgun does when defending yourself and yours. And defend ourselves Americans do: that bastion of progressive polling, Pew Research, learned in 2017 that 17% of gun owners report having had to defend themselves with firearms. Out of over 130 million gun owners that’s . . . a heckofa lot.

Dennis Chapman has done a remarkable job collating everything one can imagine about the function, reasons for and value of the 20 million plus AR model rifles that American’s prefer to every other type now. They are the do-it-all, easy-to-operate, all-American firearm that haters hate and normal Americans normally use. In addition to enabling the natural right of self-defense (“The Primary Use of All Arms”) and their unimpeachable protection under the Second Amendment, facts about them matter. They won’t convince the fear-mongers, but can speak to those with rational, open minds.

Chapman has done a great service by putting all this together in one reference. My only disappointment is the lack of an index, which would make this a powerful tool for those of us who work in the 2A trenches day by day. However, the Table of Contents is unusually extensive, and chapters have lots of sub-headings, which can give one a good idea where to look for what information. All in all, the depth of Chapman’s research and the quality of his presentation is comparable to the work of David Koppel and Stephen Halbrook. Excellent company indeed.

The genial visage seen on the back cover has quite a brain behind it. Thank you, Colonel Chapman, Esquire, for using it on our behalf!