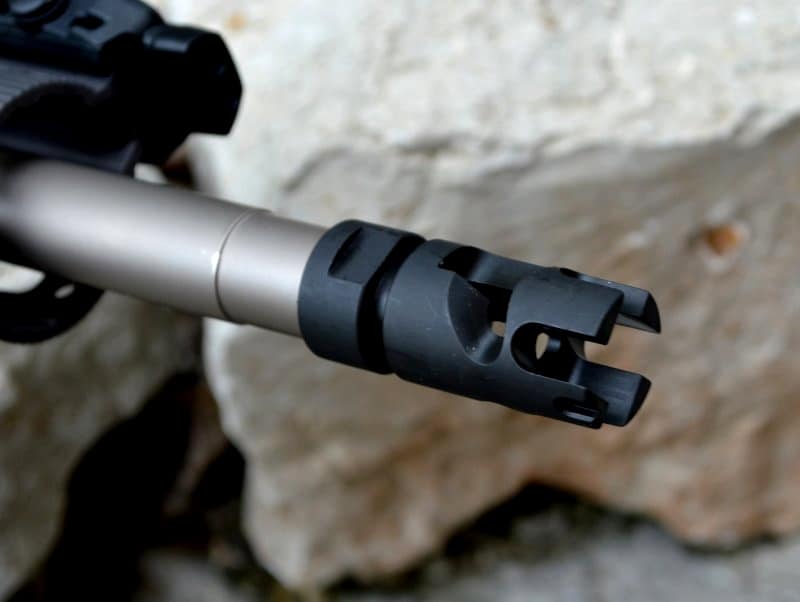 The Primary Weapons Systems FSC has become one of my favorite muzzle brakes, simply because it works great and adds some style to my builds. At this point, I have four rifles tipped with the PWS FSC brakes, so, yeah I really like them.

My Century Arms 100% American Made billet receiver model C39 has been around the block with a few upgrades. To date, those upgrades included a Burris 2-7 Scout Scope, Midwest Industries Picatinny Forend, Mission First Tactical grip, and about fifty Tapco AK mags. The package works, but one annoyance was the rather aggressive stock muzzle brake which sent a blast of muzzle flash straight up into my scope’s sight line. I needed a change, and luckily with The AK format, it is a swap and upgrade which anyone can do in under 3 minutes. In another build, my WMD Ultimate Beast AR-15 Chassis needed a great brake. It seemed logical to add a FSC 5.56 brake to my order and tip the barrel to have the ability to discuss both.

I have been really impressed with the quality of PWS products, from their T3 Summit biathlon Ruger format 10/22 rifle to their top end billet AR-15 tubes, but I am especially in love with their Brakes. Their FSC line, which stands for Flash Suppressing Compensator, are muzzle brakes which both reduce muzzle flash and deliver a flatter shooting platform all while looking totally kick ass.

In the land of muzzle brakes, the looks and features of the PWS lineup stand out. The fit and finish is above what you see on most brakes and is without question a finely made part. One feature I have found particularly nice on their AR-15 5.56 FSC line is that there is a lip on the rear/thread side of the brake which covers up either the crush washer or supplied shims used to align the brake to the muzzle. On the AK-47 model, the compensator transitions nicely into a standard AK-47 barrel and aligns/indexes to the muzzle brake detent.

The AR-15 5.56 PWS FSC brakes installs just as any other brake would with the exception that you add the appropriate number of shims to perfectly align the brake. This flexibility allows the brake “clocking” to be tuned later on. In most cases a 12 o’clock alignment/clocking of the brake works well, but more recently many shooter prefer a slight 1 o’clock clocking to better fit a shooting style and further flatten the rifle during shots. In most cases, this post install timing would require consistently replacing the crush washer. With the PWS FSC, you just add or subtract a shim at any time. From a looks perspective, the rear lip/skirt on the brake covers any shims used as shown in my WMD Ultimate Beast chassis.

The installation of the AK version is about as easy as it comes. Push in the muzzle brake detent on your AK-47 and unscrew the brake, then reinstall the PWS FSC brake. Done.

I personally dig the stylized Starship Troopers look, as it adds a bunch of style to the end of the muzzle. Why not ,since you are spending the money anyway.

As we know, looks are secondary to performance. PWS’s brakes work great as well as any Miculek style brake I have tested. I have quite a bit of experience with standard A2 AR-15 birdcage flash hiders and they do a decent job of mitigating flash, but they do zip for recoil reduction. For those who still run standard birdcages on their AR-15, the PWS FSC delivers a dramatic change in how your rifle shoots. Expect a louder, but much softer shooting rifle with the majority of flash being mitigated.

Conversely, the stock Century Arms C39′s brake is pretty effective, but doesn’t do much for flash suppression which in this case is directed straight up through a large single port. Making the swap to the FSC brake delivered both a significant improvement in flash suppression, but also a softer shooting AK-47 which could deliver faster follow up shots.

I am all about making my rifles look cooler, but the coolness is paired with performance and in this case PWS definitely delivers with the FSC series of brakes for AR-15 and AK-47 shooters. It is an easy swap for even a novice gunsmith, and it yields big dividends. While neither device will deliver a quieter shooting gun, your gun will definitely shoot faster and softer.

FSC 556 A PWS signature product, the FSC556 couples flash suppression with muzzle control. The FSC556 is an ideal compensator for putting a high volume of rounds on target, and is a mounting option for the Gemtech HALO.