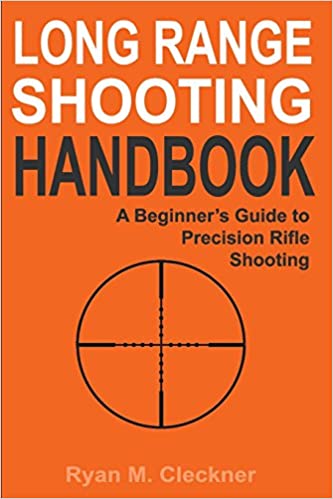 Maybe you’ve seen long-range competitions on television, or you’ve seen a marine sniper with his long range scope. Whatever the reason you’re interested in long-range shooting, everyone has a different perspectives that bring new ideas to the table.

Full of useful information, in a package small enough to take with you on shooting outings, the Long Range Shooting Handbook: The Complete Beginner’s Guide to Precision Rifle Shooting accomplishes exactly what the title says.

Clecker clearly knows what he’s talking about, with 5 years as a Special Forces sniper under his belt. After that, he continued to teach shooting and the experience shows in his writing.

In addition, Cleckner has worked with gun industry outfits like Remington Outdoor Company as Vice President. The man has a passion for the second amendment and precision shooting.

The book is a beginner’s guide, but it has a unique perspective and an abundance of maps and graphs that any experienced shooter can appreciate. In fact, the book’s orange cover and small size were designed on purpose by Cleckner so that it will be easily found among your gear when shooting.

That’s a great feature, and his website even has targets for printing and other useful links to continue your education. But let’s talk about the words inside the book.

The only possible negative about the whole book is so much text with few images to break it up;  but the information is succinct with no fluff or wasted space. Cleckner stripped down the subject to focus on the basics an easy-to-understand way. In fact, he shows how to do target anything with a rifle and just simple math.

The book is divided into 3 main parts: Equipment, Fundamentals, and Applications. Each section is explained so that even the greenest of shooters can follow. Equipment breaks down the basics of a shooter’s inventory and gives advice on the bare minimum.

Fundamentals details various important things to know when shooting, such as various ammunition and how different weather can affect your bullet, but the largest part of the book is the Applications section.

Applications cover everything from mounting your scope to cleaning your rifle after shooting, and everything in between. Trajectories, accounting for windage, and different shooting stances are just some of the topics discussed.

Sprinkled throughout the section are tips by Cleckner himself, golden rules that will improve almost anyone’s shooting. From one shooter to another, these are some of the simplest explanations that you’ll find and are all easy to implement.

Cleckner notes that you may not agree with everything in the book but asks that you at least give it a shot (pun intended), because he understands that everyone has different preferences when perspectives on shooting. Still, the advice found within these pages will instantly give a new shooter an advantage and get them well on their way to better long-range shooting. I can’t recommend this book enough! Long Range Shooting Handbook is a great addition to anyone’s shooting shelf.

All DRGO articles by Richard Douglas