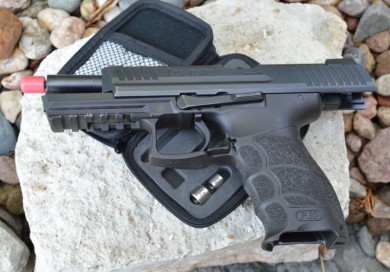 Since my first time using LaserLyte’s laser training system I have been hooked on it for in-home training. The idea is pretty simple; clear the gun and drop in a laser trainer cartridge. The firing pin will now hit the momentary activation switch on the back of the laser trainer round and a laser shoots a laser dot on your target. Usually the process does not even require the gun to be disassembled. When I travel with a gun, I usually pack a laser trainer kit to give me something to do in the hotel room instead of just watching TV, and I am building my skills in the process.

One of my firearms friends suggested I expand beyond LaserLyte and take a look at their competition, specifically at Laser Ammo SureStrike’s Ultimate LE kit. The Laser Ammo kit delivers laser shooting capabilities all the popular Law Enforcement Calibers from .223, 9mm, .40 S&W, and .45 ACP in one kit, which is packaged in a great little ballistic soft side zippered case with a couple reflective laser target cards. You can of course use any target, but the reflective targets included with the kit deliver a more visible shot. Generally though, I seem to find myself just aiming at light switches, lights, and smoke detectors which show hits very nicely on their bright white color.

During the ammo shortage of the last couple years, I realized how valuable laser firearm training systems were. You can shoot anywhere and anytime you want… even in your basement after your wife falls asleep. The only sound you can hear is the hammer and firing pin drop, your action manually re-cycling, and of course the usual jeers and cheers associated with a hit or miss. Now with kids in the home, I realized quickly that I cannot get to the range five to six times a month like I used to, but laser training has kept me sharp. Though the initial cost of laser training kits may seem expensive, even this Laser Ammo SureStrike Ultimate LE Edition Laser Trainer $200 kit pays for itself in only 800 laser shots (approximately $.25 per round of live ammo). Instead of individual $100 dedicated Laser Training caliber specific inserts, the Laser Ammo SureStrike kits are based around a laser base adapter which $25 caliber specific adapters screw into. In the case of this $200 LE Ultimate kit, it includes adapter for .223, 9mm, .40 S&W, and .45 ACP in one kit. Add a $40 12-gauge adapter and you can have all kinds of fun training with your pump action shotguns. The base laser body accepts the included .223 and 9mm adapters. The included .40 S&W and .45 ACP adapters slip over the 9mm adapter as does the optional 12-gauge accessory adapter. I am looking forward to testing the 12-gauge adapter at some point as well.

I have found the all stainless steel Laser Ammo system to be more precise and more zero’ed to the bores of the guns I have used it in than competitors inserts. Generally, I have to do a little “clocking” of the insert to get it aligned to my firearm’s zero, but the Laser Ammo solution seems to be zero’ed with the bore much more often.

If you like the LaserLyte target trainers like I do, the Laser Ammo SureStrike laser cartridge system is cross compatible with its competitors targets. SureStrike Laser Ammo delivers a kit which I find more professional and user friendly than competitors’ inserts just sold in a blister pack. Laser Ammo has wisely delivered their kit in a soft sided case which has cut-outs for each of the adapter parts. What this does is prevent small parts and the main body from being lost in the black hole that is your range bag. A 3”x5” soft sided cases you can find, a small 9mm laser adapter could be lost forever. In this case, neatness counts. I like the case so much I now also store all my other adapters in the netting area inside the case. Safety is another area which I believe SureStrike Laser Ammo excels. On pistols, the extension pipe serves two purposes. First it provides an adapter extension out the end of the barrel which can be tipped with the included red safety knob letting everyone know that the gun is safe. The second purpose of the extension is that it allows the insert to be safely removed once training is complete. In most cases I found that installation was best performed by unloading and field stripping the gun. I could drop in the adapter into most pistols and just screw in the extension, but I think it is a best safety practice to field strip the gun to give your brain the mental time to switch from a hot gun and a cold training gun and vice versa.

The Laser Ammo SureStrike Ultimate LE Edition Laser Trainer kit is a deal at $199.99 and offers shooters a well thought out and quality solution for laser training. Personally I did not use the target card much, but I appreciate that they were added to such a nice laser cartridge training kit. If you are LEO, military, a 3-Gunner, this kit is an automatic win for you form a training perspective, and it can easily span all the major calibers. What I have found very useful is that this kit is allowing me to train more often and has allowed me to cross train some of my kids in a safe and controlled environment on the operation of each firearm before they go to the range. Great product and definitely a top recommended product. As Christmas is approaching, this is a perfect gift for any shooter.

The SureStrikeTM cartridge is placed into the chamber and secured in place.

By pulling the trigger, the impact of the firing pin activates the SureStrike to emit an eye safe laser pulse, a shot of red light, which simulates the point of impact where a bullet fired from the weapon would have struck.

This immediate feedback from the SureStrike transforms dry fire into a powerful learning experience.