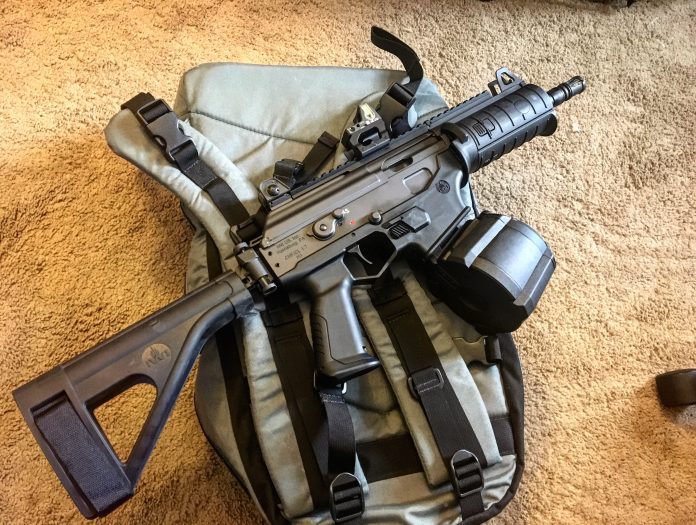 I’m often pleased by the performance of a firearm. It’s been a rare occurrence, only once in just over a year, that a firearm has given me trouble. That incident was remedied by a part swap and the rifle itself continued on to success in its trials.

It is far rarer I’m surprised by a firearm. Where picking it up and running it produces the expected reliability and performance but the experience feels natural, like the firearm itself was built to be precisely where it is, in your hands. 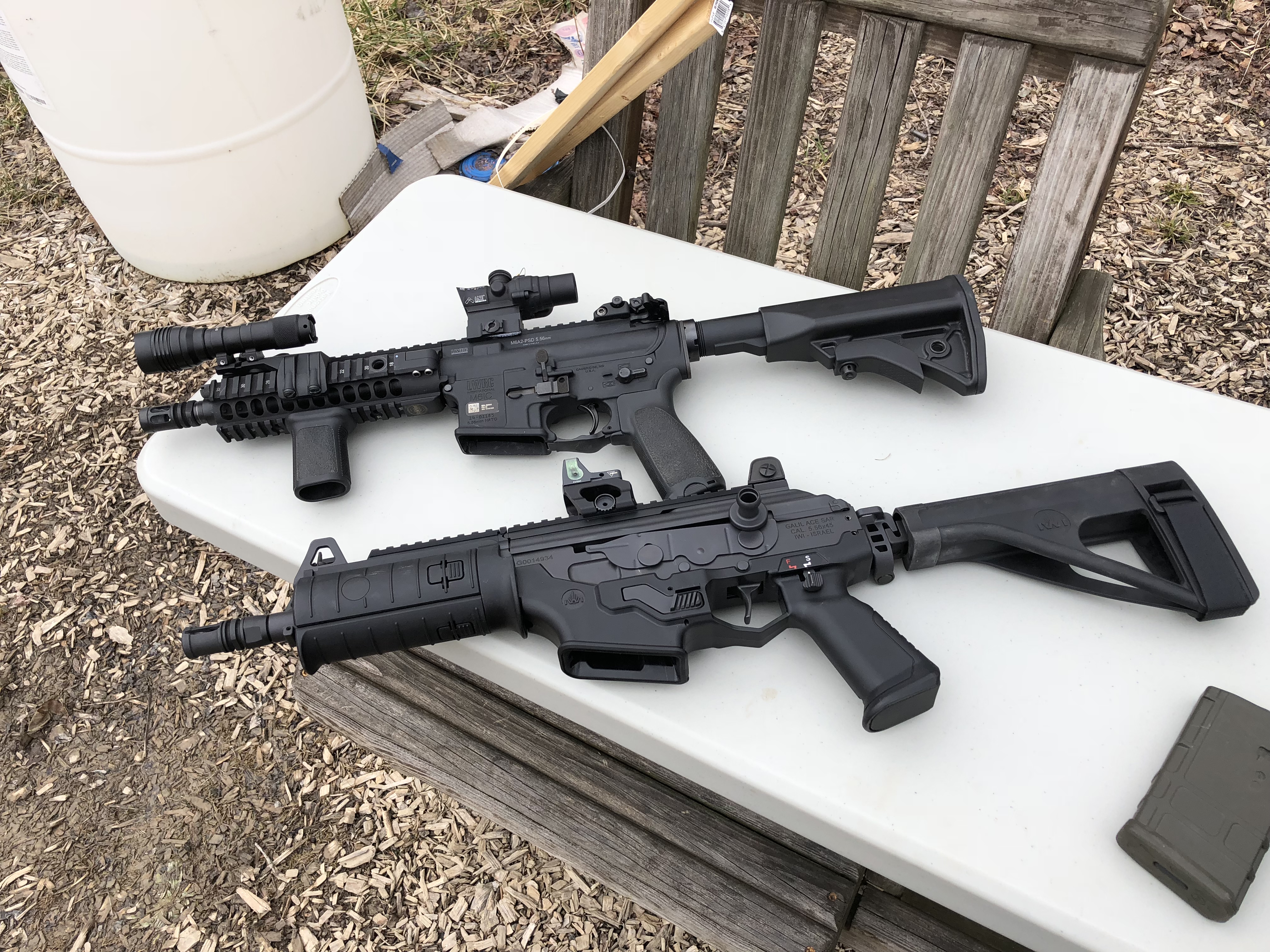 The Galil ACE was just this sort of rarely melded firearm. Not only did it work it filled the requested role so phenomenally it was intrinsically pleasurable to work with.

So for anyone who wants the short version, I recommend the ACE. Highly.

Breaking Down the ACE 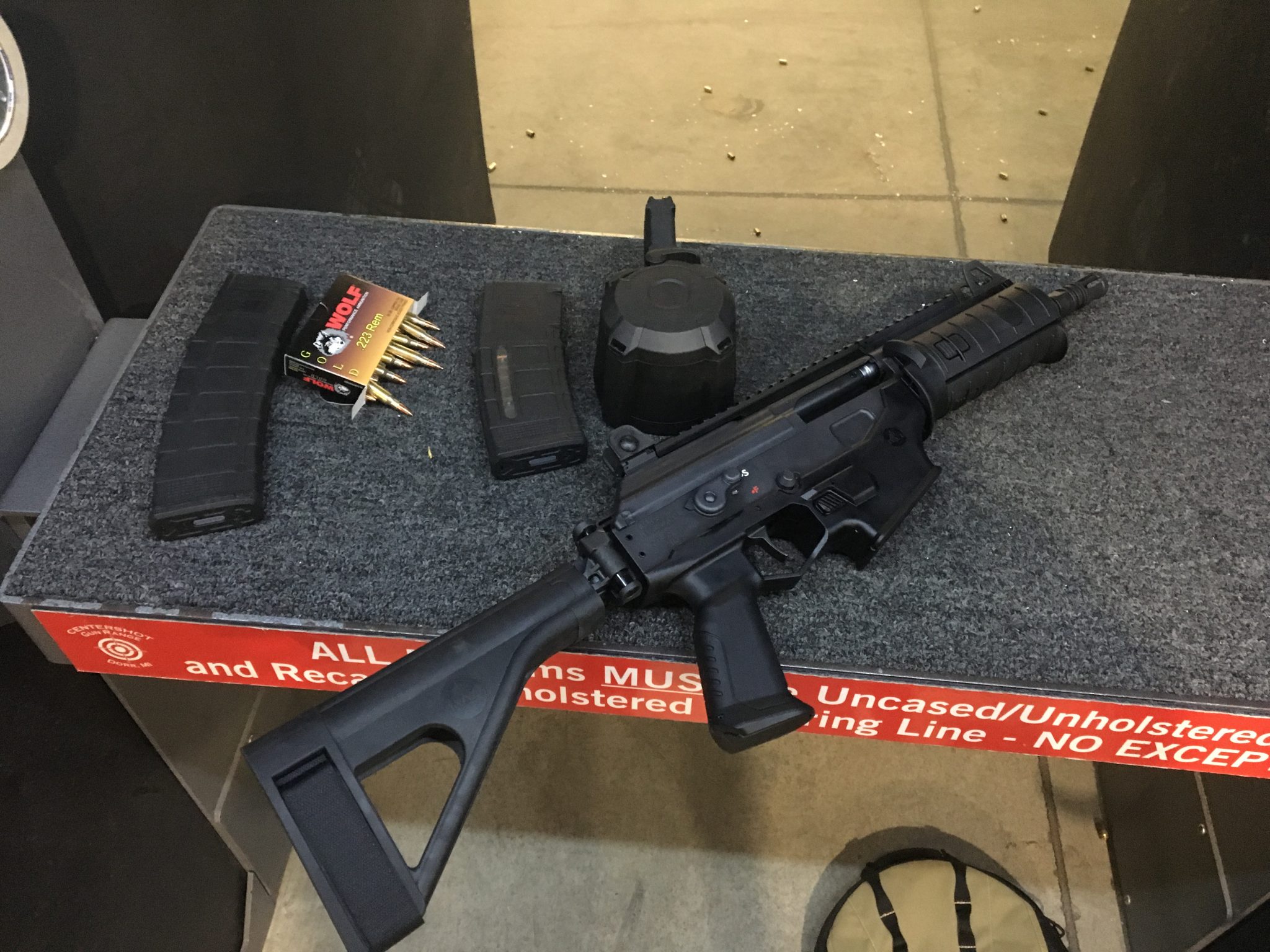 This updated Galil is a carbine derived from a Finnish AK variant and AR15 platforms. It merges many of the positive characteristics of both. For more on this check my first impressions article.

The ACE dresses out with

With a growing list of upgrades the little carbine holds its own feature wise against the competition, even IWI’s own X95. 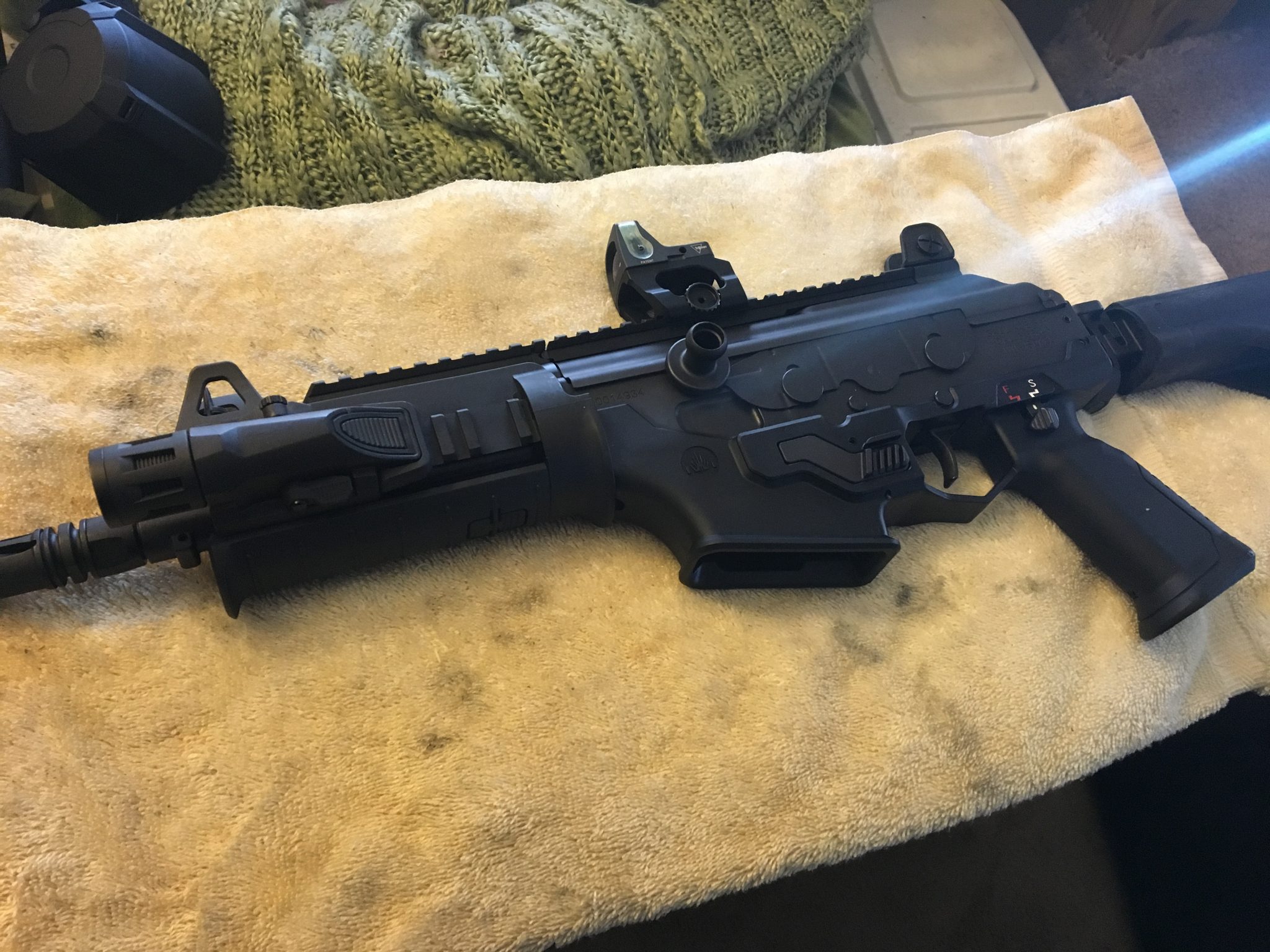 The ACE is essentially an AK someone went over with an ergonomic wish list without throwing out the core rifle. It’s break down is in most ways simpler while the feature set lends itself to more modern rifle technique than the evolving conscripts coming from bolt actions to the Kalashnikov back in the 1940’s and 50’s. 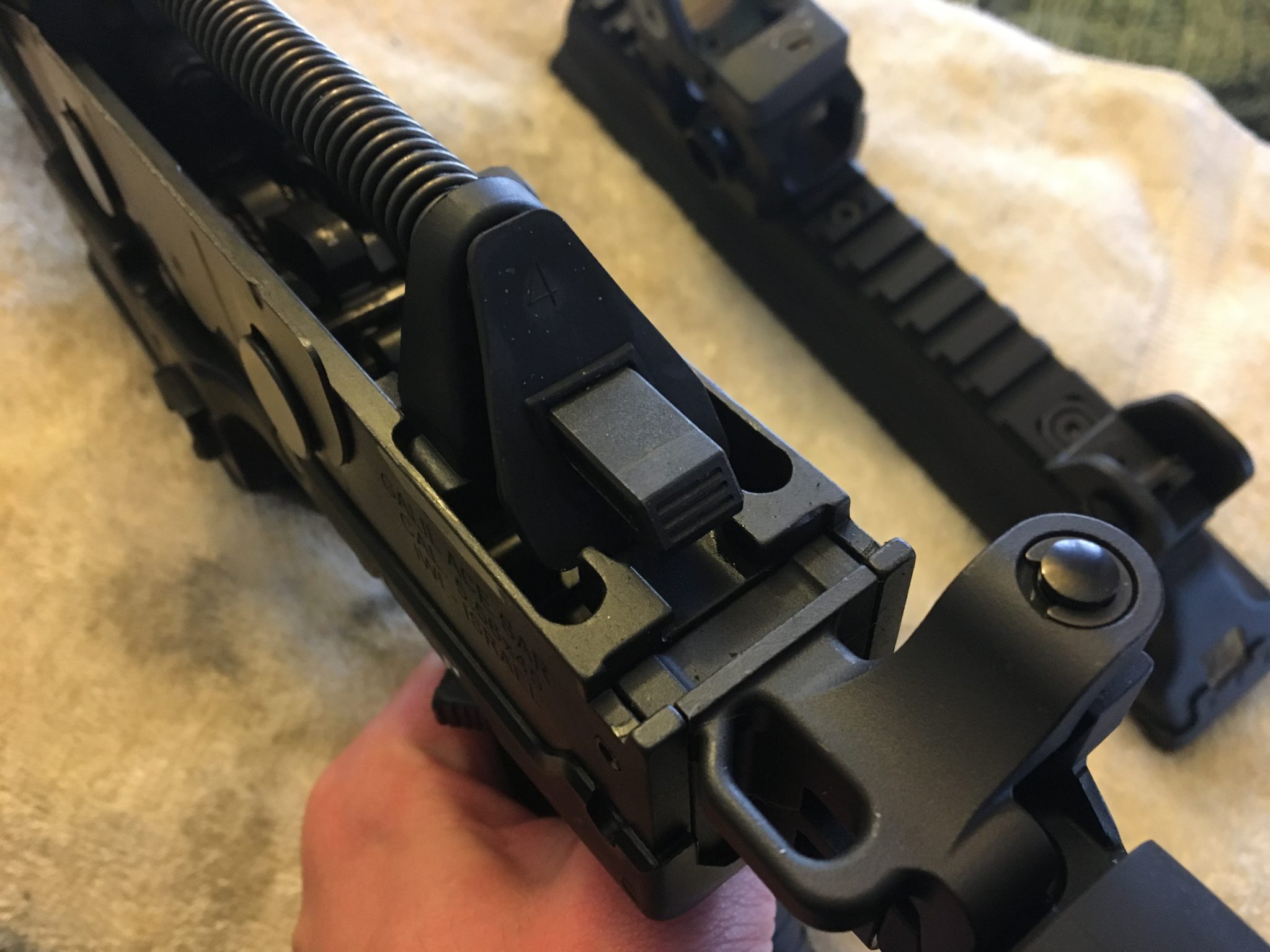 As with any weapon, the breakdown starts with clearing the rifle and then, like its AK progenitor, you press the take down tab. The button on the base of the recoil spring assembly is longer than the AK and has a recoil buffer so instead of just pushing it and popping the cover you push the button all the way inside the receiver cover and then down which will brace it on the receiver.

You can see the single point sling and folding brace/stock mechanism in the picture above. I ran it with a Blue Force Gear Single Point. 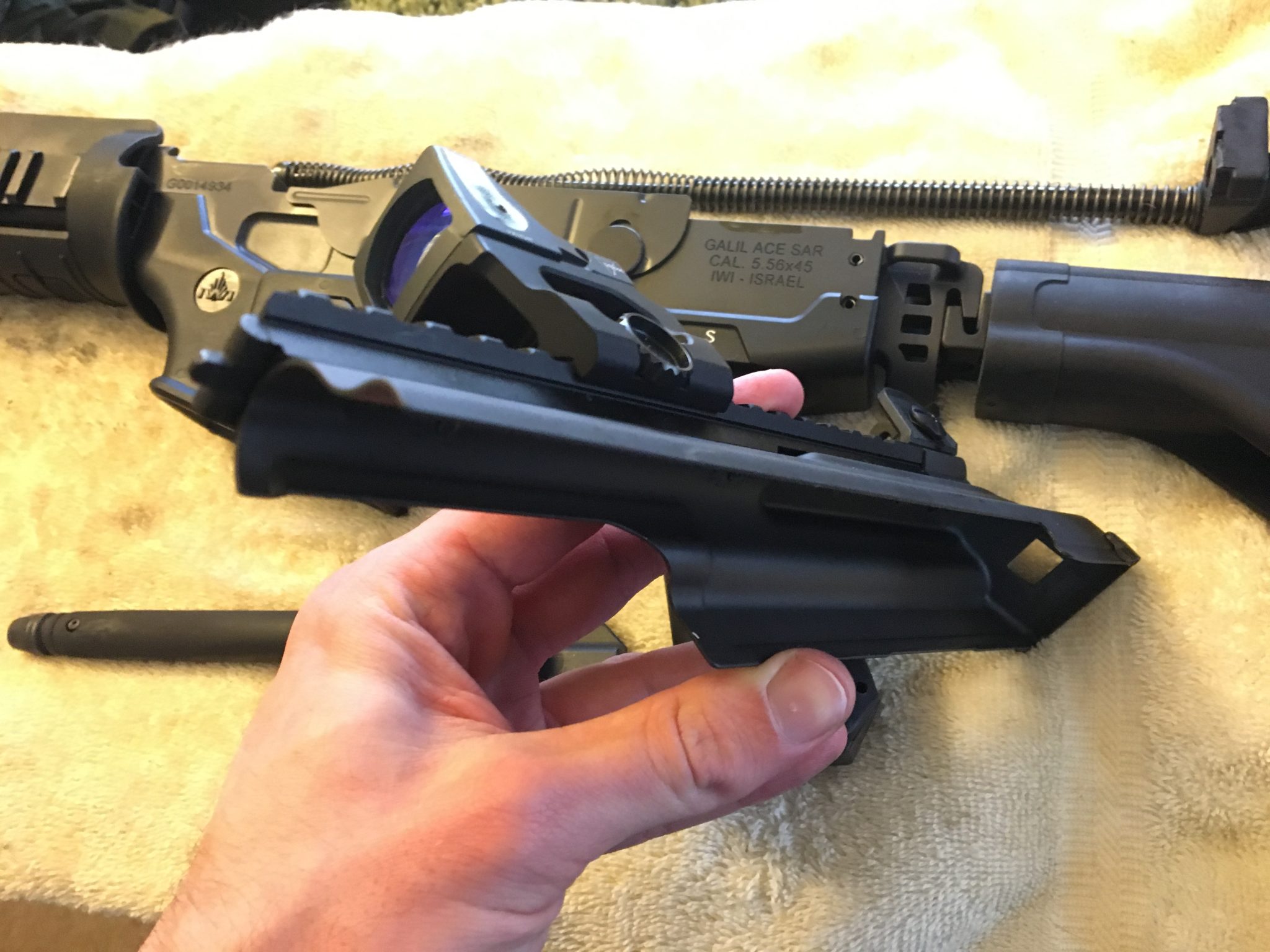 The receiver top cover is all AK until you hit the top rail. Fit to the receiver is very precise and it does not willingly separate even when the take down button is pushed, hence bracing the recoil spring on the receiver.

The dual axis rounded tab you see on the front helps index and align the cover properly on reassembly and the rear of the cover is additionally reinforced for rigidity. Putting it back in place for reassembly required bracing the recoil spring assembly in the receiver again, placing the plate, and then charging the weapon pops the assembly into place and locks the cover.

Unlike the AK the Galil ACE uses a peep sight. The aperture is adjustable for windage and with tritium inserts for night time use. The full length rail supports a modern optics suite however you will want to avoid bridging the gap between the cover and the gas tube to keep take down simple.

While I have not used a precision optic on this little carbine I did not notice any shift in point of aim/point of impact from disassembly and reassembly confirming the indexing process does its job correctly.

This has always been a system built on well engineered simplicity and this is a well executed iteration of that system. Pull out the recoil spring and buffer and the bolt carrier can now retract and lift free.

Like the AK the Galil ACE bolt carrier group and piston mate up with cuts in the receiver to allow it free, these are the end of its travel track rails. The full stroke piston and carrier are a little heavier than the Kalashnikov design.

The charging handle is pinned to the carriers left side. The carrier has a few minor machining changes from the AK original. 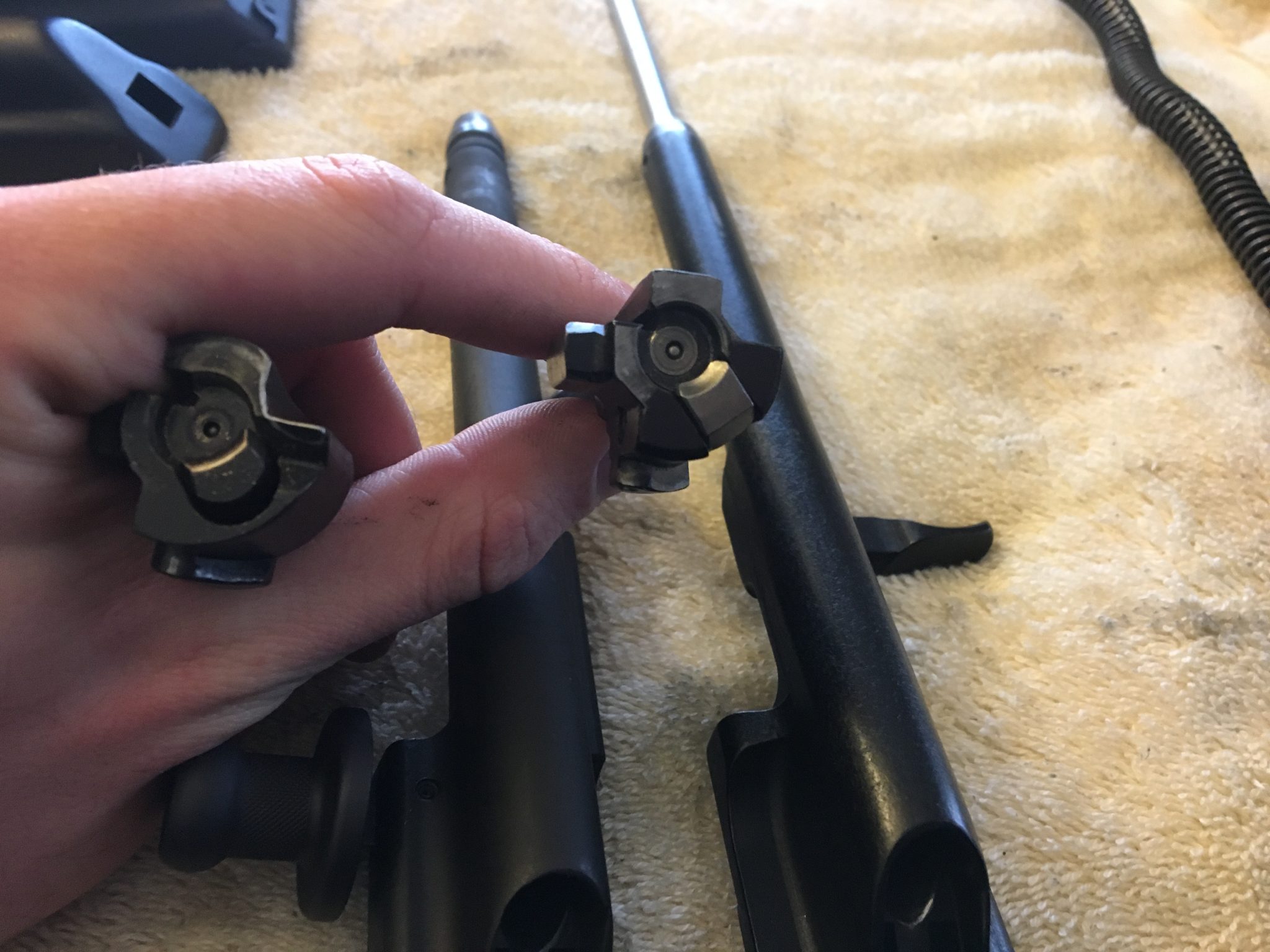 The bolt assemblies are also similar and remove from the carriers identically. The Galil’s extractor claw is shrouded and the firing pin is spring braced to minimize the chance of a slam fire on lighter primers. 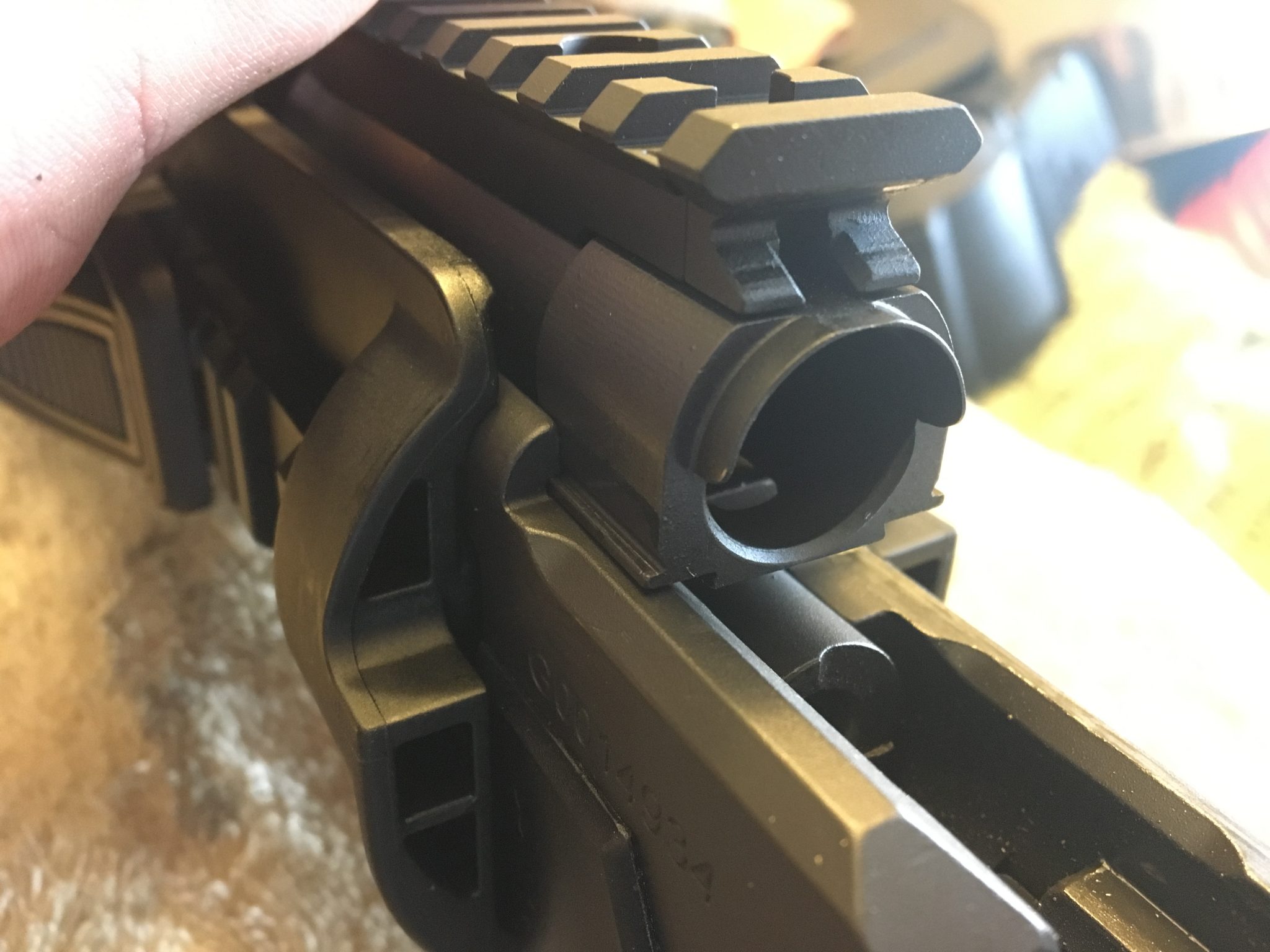 With the Galil ACE the gas tube gives a wonderful take on the benefits of modern machining. Instead of a tab that rotates to retain the stamped steel gas tube assembly of the old AK the Galil’s gas tube slides into place on machined cuts. 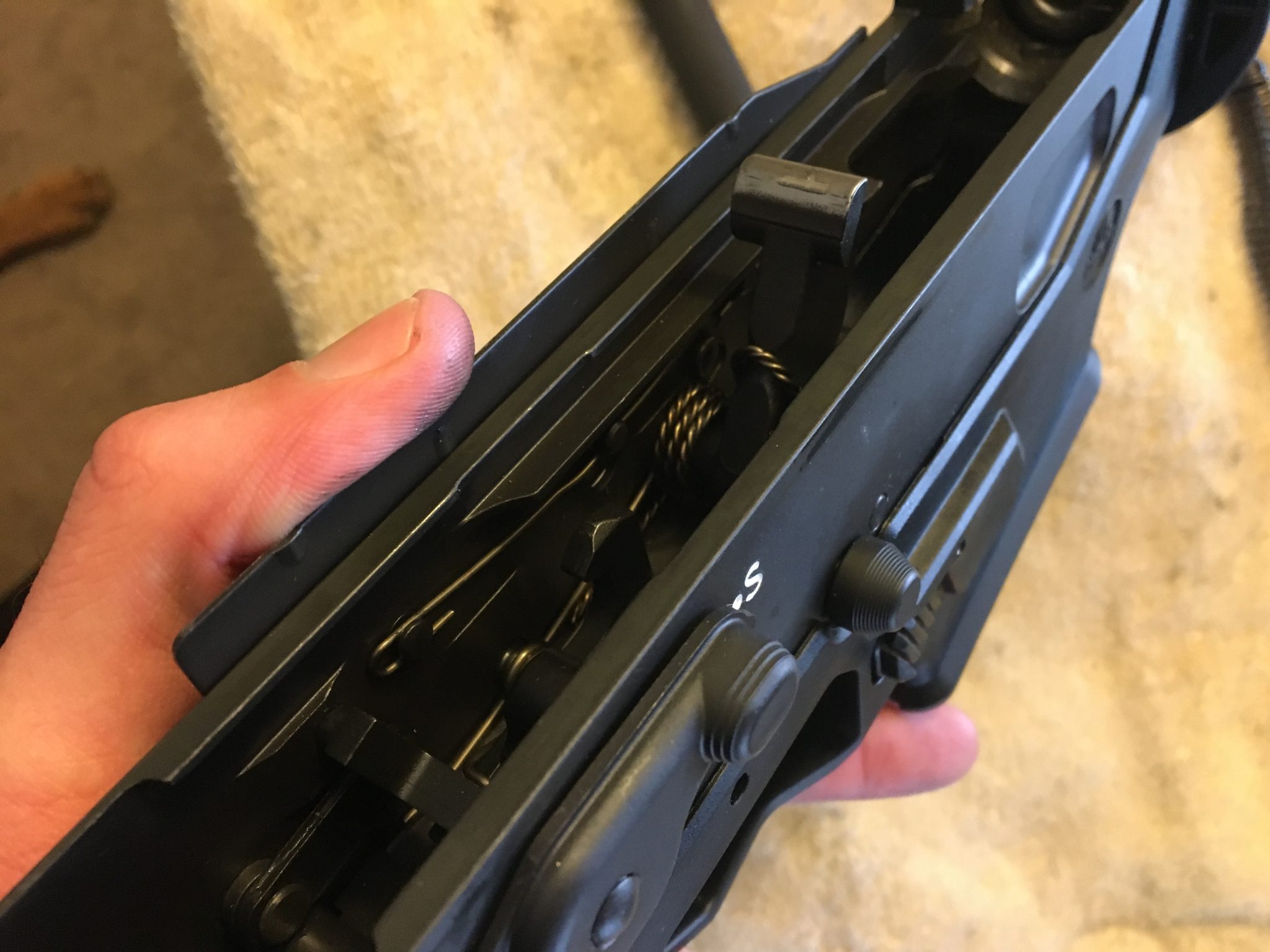 With the major components removed the interior of the Galil ACE has that familiar AK layout. The differences here include the safety lever, shortened and more ergonomic with a control switch for the thumb and index finger for right hand shooters.

Note: I wouldn’t call the fire controls an ambidextrous feature, it favors right handed shooters. The safety control is not a mirrored system. It is comfortable to shoot left handed but the controls are designed to take someone familiar with an AK or AR style firearm and transition them to this easily. Ambidexterity was a secondary design concern.

You can see the bolt catch control just forward of the safety lever. This placement makes it very easy to lock the bolt to the rear and gives you a release method via your index finger (or right hand thumb while shooting left side). I found that I preferred reloading with the charging handle but locking the bolt open with the control was a much smoother operation than you get with most rifles. 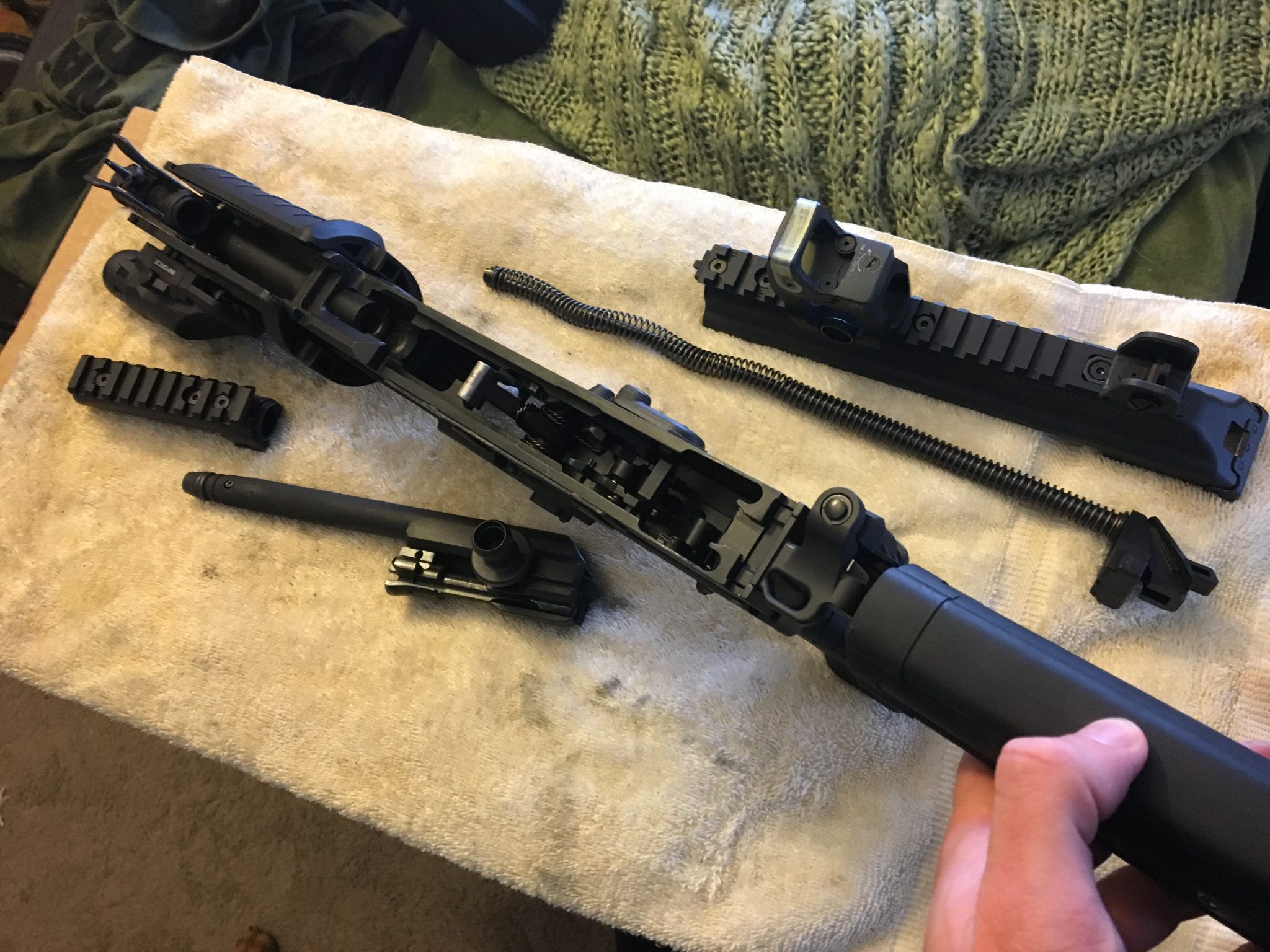 Five assemblies, most of which you do not have to break down any further for good maintenance.

From muzzle to brace the Galil ACE is an intrinsically fit firearm for the EDC Carbine role that this pistol fills. Out of the box ready in all lighting conditions.

Adding a good flashlight like the INFORCE WML in the photo, a Streamlight HL-X, or a Surefire 300 or 600 series Scout light is the only necessary addition in my opinion. With the sights as good as the are, and tritium inserted for night time, an optic becomes a value added addition instead of a necessity. An RMR on a SCALARWORKS mount kept iron sights as an option even though they are not co witnessed. The raised optic set up worked very well and using iron sights was just a matter of rolling your cheek further down on the brace. 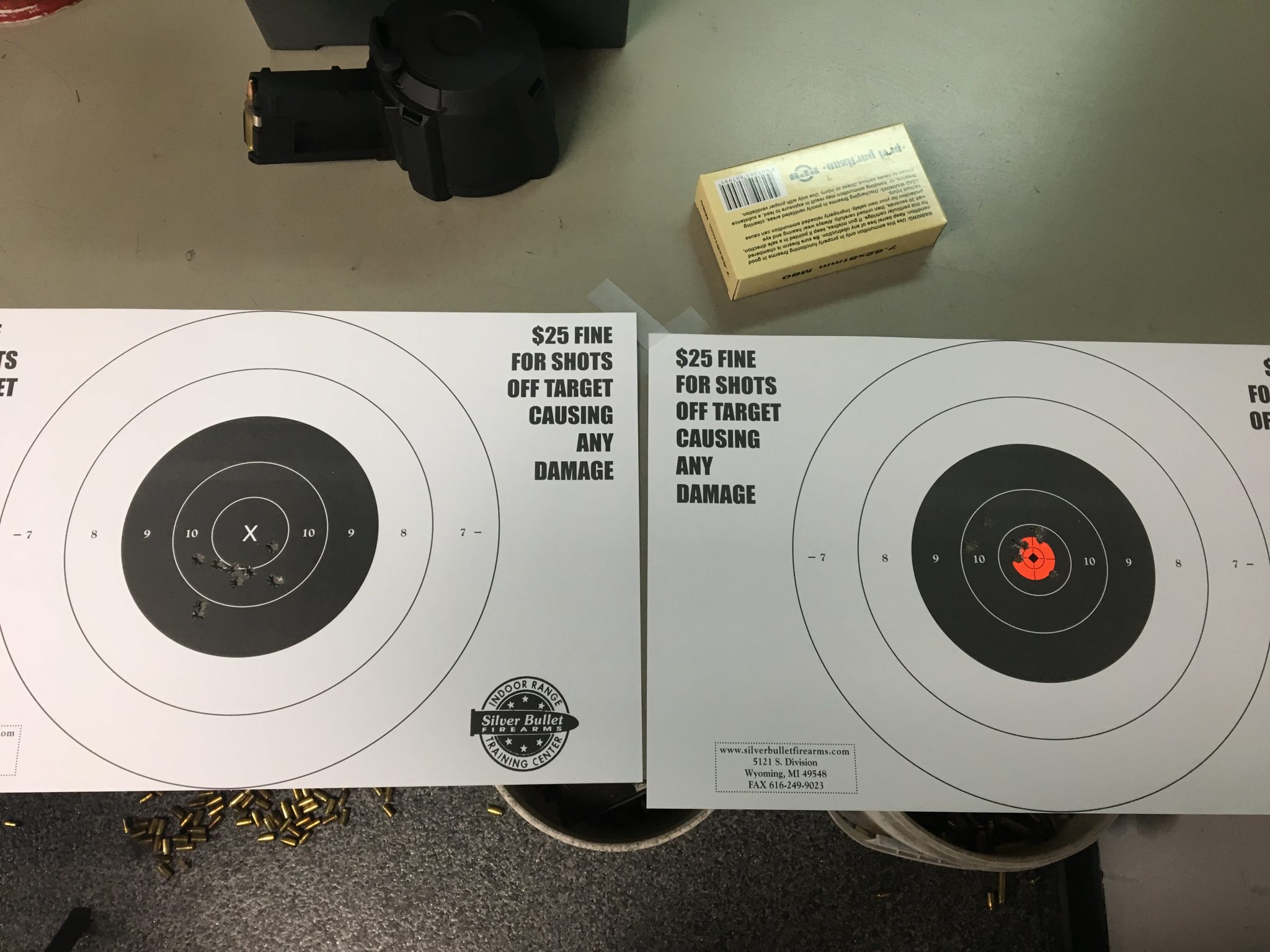 With the RMR on the ACE I grabbed my PSD for a baseline and I hit the indoor range to zero.

The Galil’s trigger is a smooth AK grade trigger, steady pressure until a soft wall and then a pull through break. It is no Geissele SSA, not remotely. It is capable of dependable accuracy. My PSD does have an SSA-E inside it, but my groupings were only marginally improved and only while supported. Granted too the zeroing was using 55gr ammo out of 8.5″ 1/7 twist CHF barrels so that was also likely a contributor. In short the trigger is more than a match to the task asked of it.

Shooting the the little carbines side by side highlighted the live fire capability of the stock Galil ACE.

My PSD is my go to EDC Carbine, it’s an AR15 and it moves and shoots like an AR15. The ACE shoots like its AK ancestry would imply, the bolt carrier movement gives it a smooth lateral recoil impulse that combined with the weight of the gun keeps it tracking on target easily. The chin and cheek welds are lower with the iron sights but with optics can be higher than normal on an AR. The similarities are there and fundamentals are fundamentals, but ergonomically working the Galil ACE is a different animal and it was a pleasure to learn. 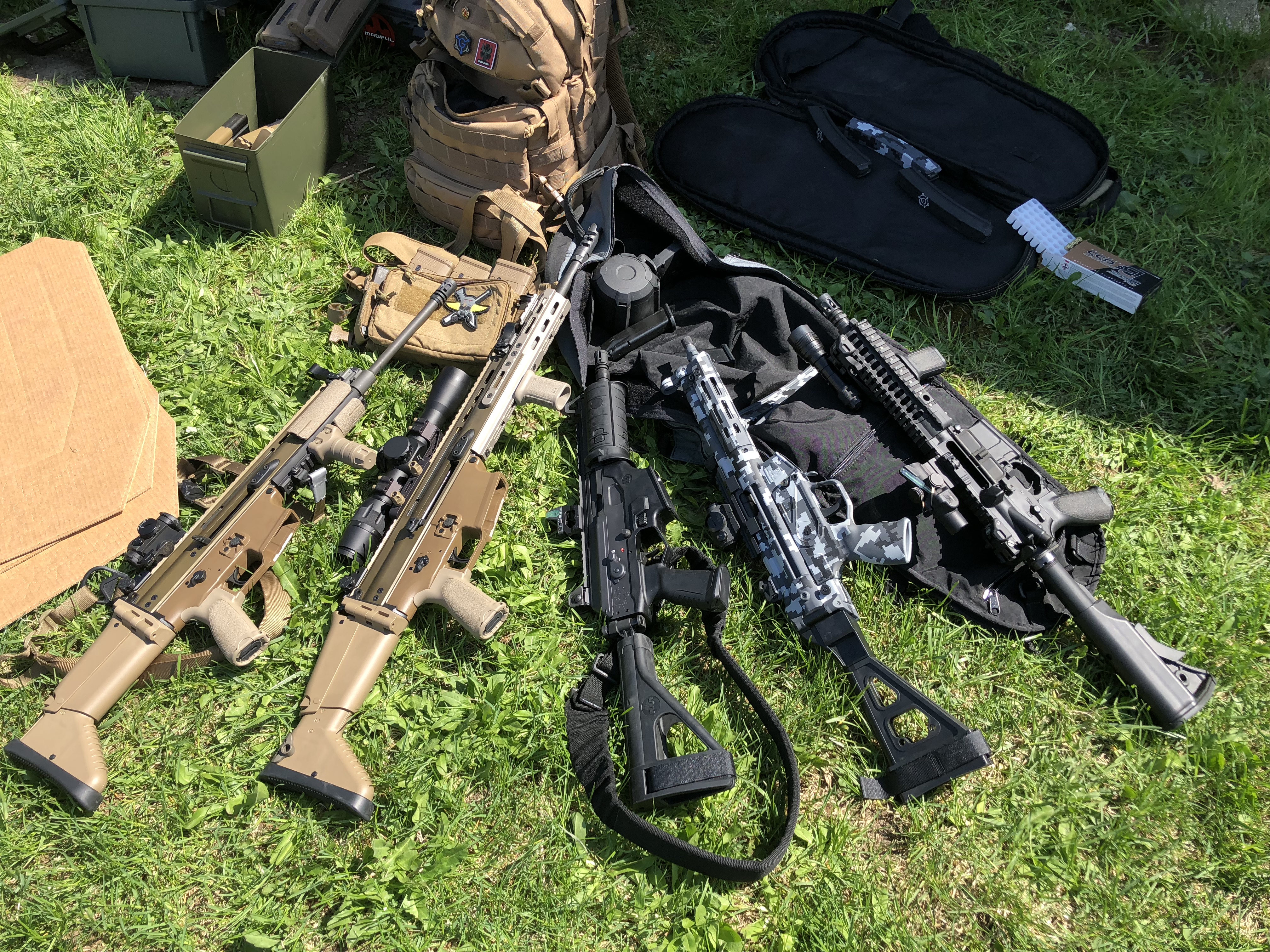 Going LFAM (Live Fire and Maneuver) a friend and I brought out some of our best to give the gun a run. 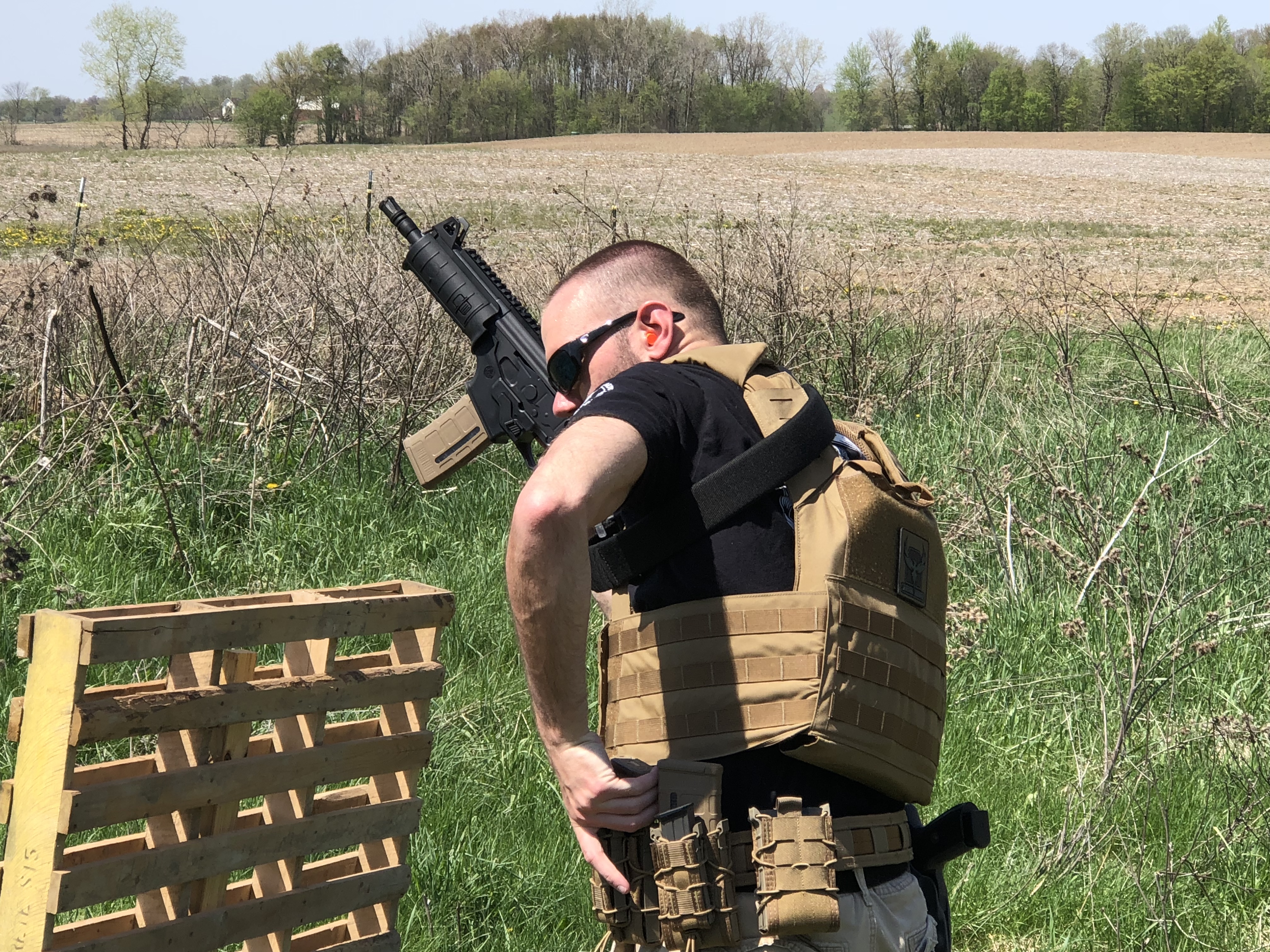 Running the ACE right handed is its ergonomic sweet spot. The left side safety lever and charging handle combined with the bolt lock are all precision placed for superior control as a righty.

I found running reloads off the charging handle felt more natural than trying to drop the bolt lock shooting right handed. That changed offhand where the bolt lock is in an AR like place from that orientation. 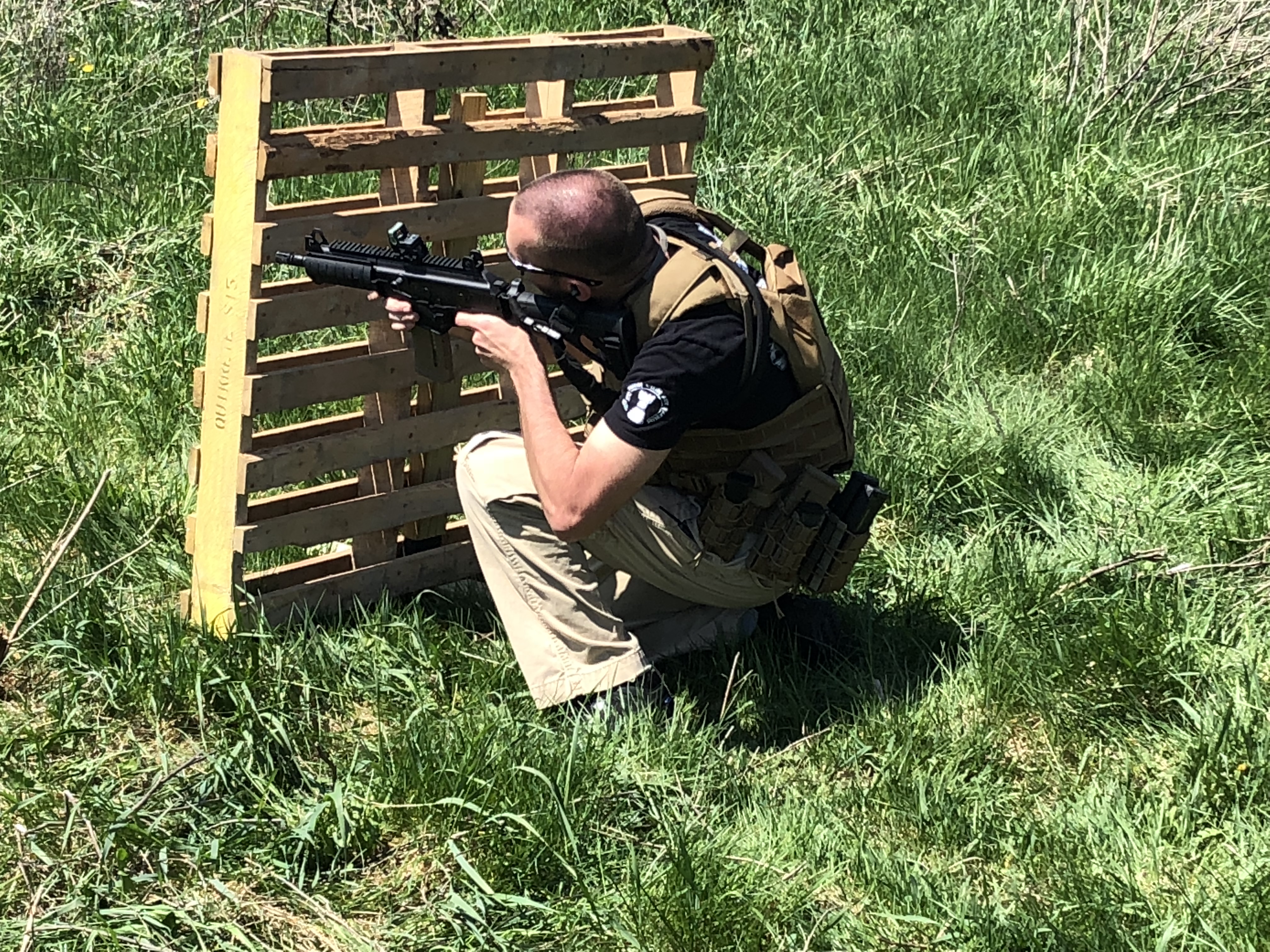 Working the safety off hand shooting is a right hand job. There is no easy was to push forward on the thumb lever or down on the more traditional right hand side ‘AK’ safety switch with the left hand. Off my left side I ran the Galil ACE much more like a run an AK with the exception of reloads, the ambidextrous magazine release and the bolt lock make that a quick process either side. 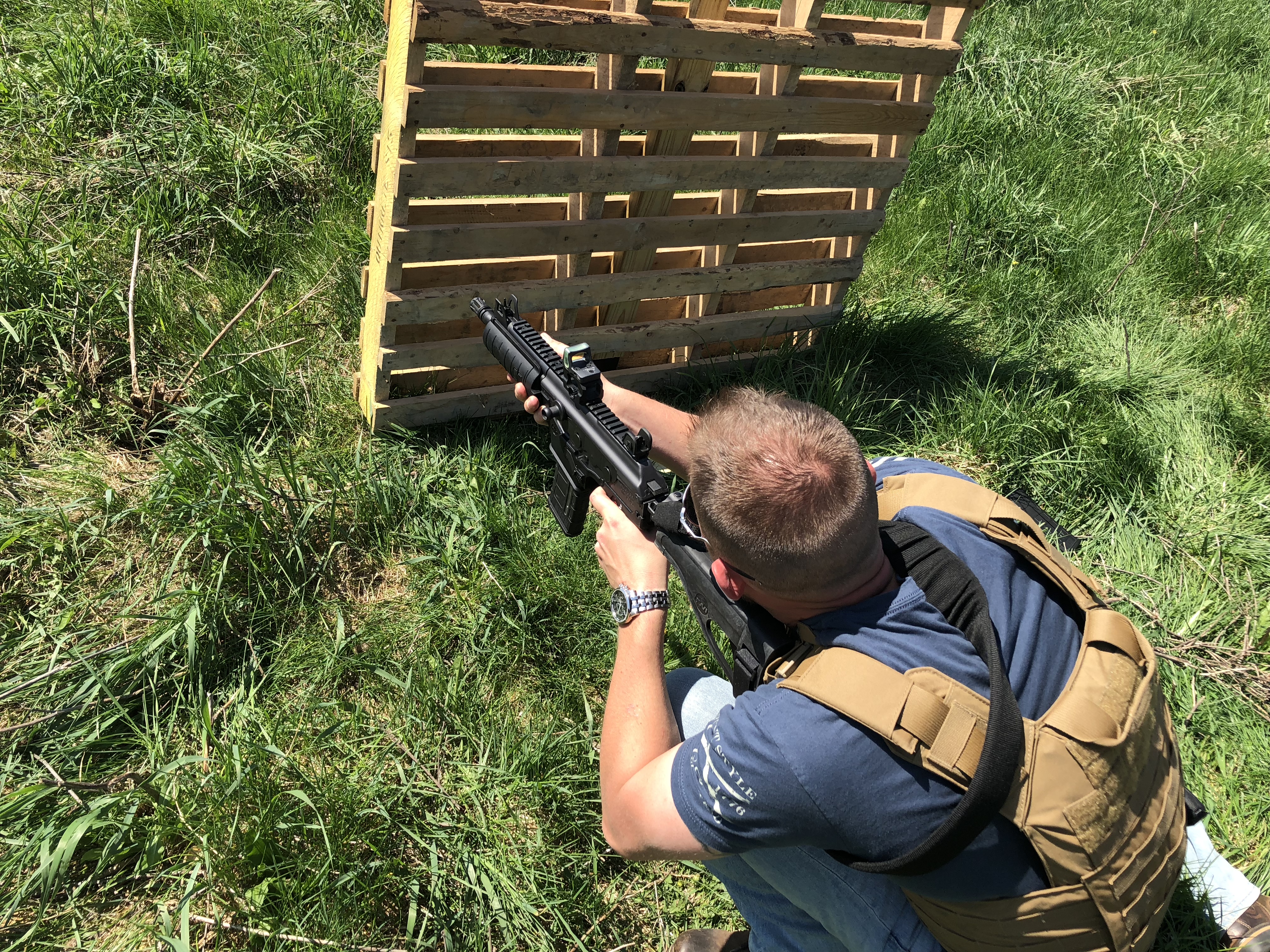 All that being said it was still a wonderfully smooth gun to run offhand. Spent casings are sent away with typical AK suborbital speed off of the fixed ejector. They kick off in a 2 o’clock direction and keeping your arm out of the path is no issue. 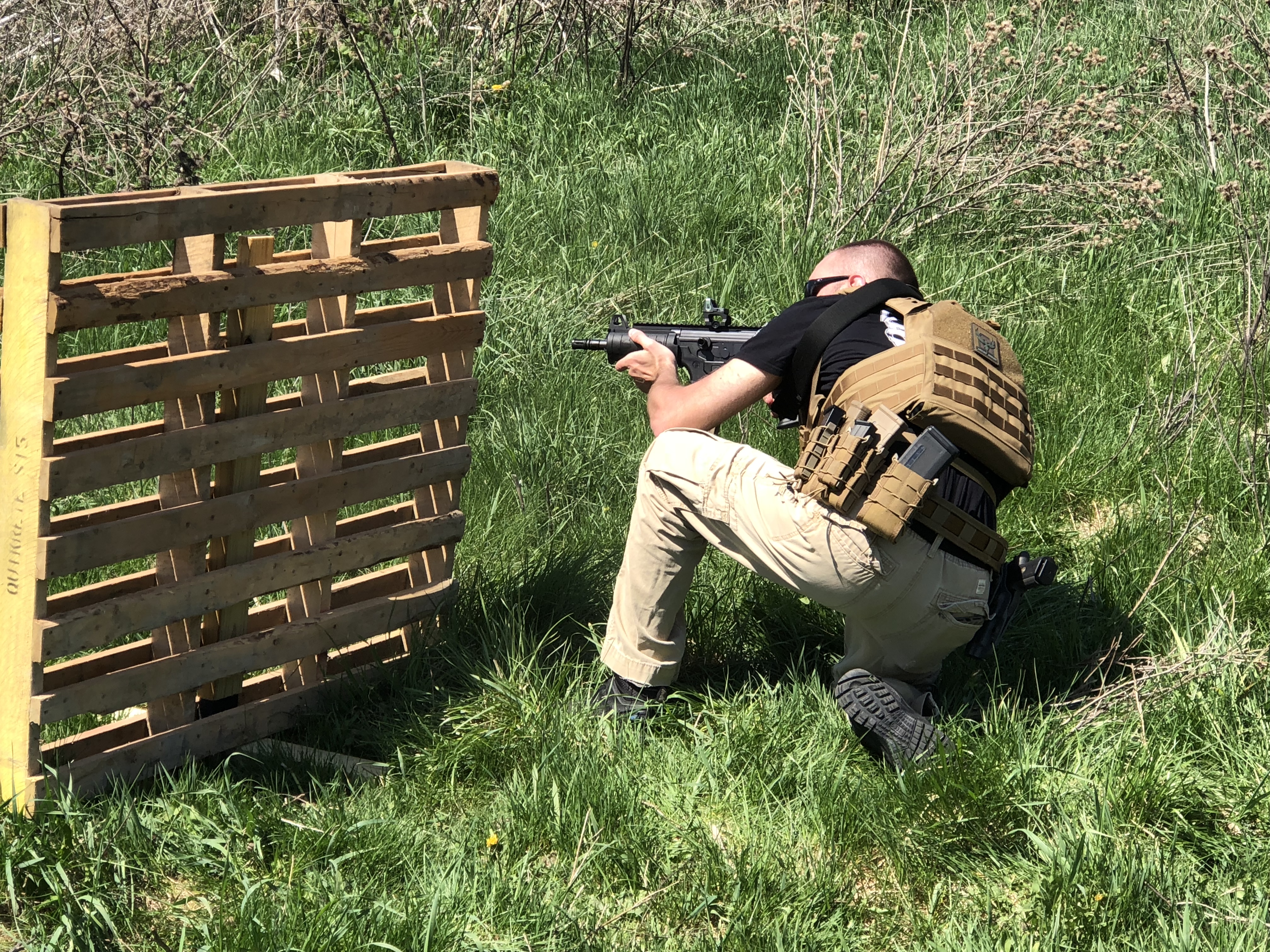 Now with a couple of cases of a variety of ammo through it and I can happily report no stoppages of any variety. Being a short 1/7 twist barrel it will favor heavy grain loads but it functioned and grouped with every commercial brass and steel case variety I put through, 7 in total if I recall correctly.

Considering it as an EDC Carbine option: The Galil hits both needs and desirable features time and time again. 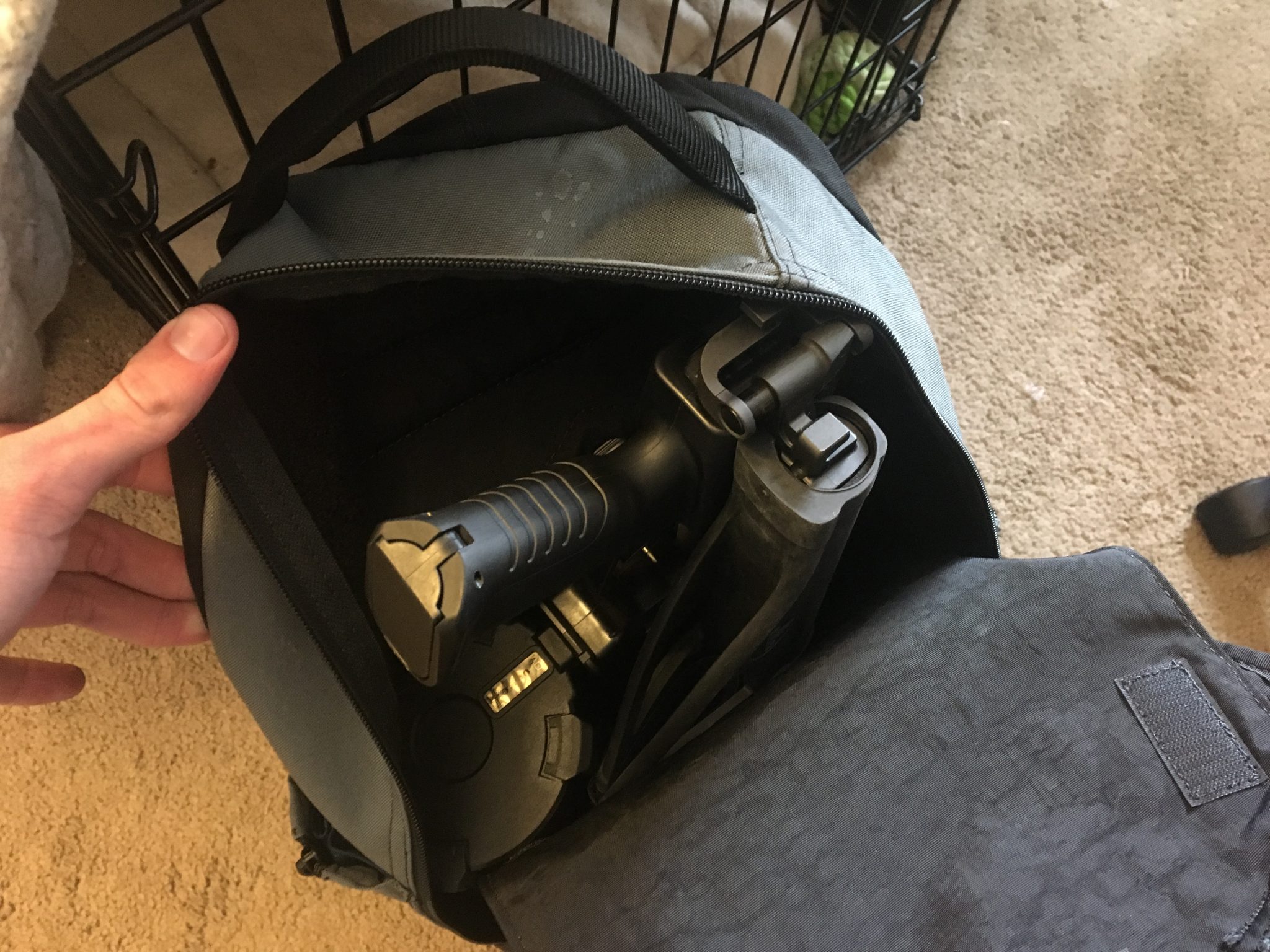 The Galil ACE can fold away into my Sentinel Concepts Revelation 2.0 by Tuff Products with a Magpul D60, a light, and optic without issue. It’s fireable folded too although the safety rubs on the brace so it must be pushed with intent (it will push the brace out slightly on the hinge). It is easier to pull and lock the brace solidly open before working the safety.

IWI’s Galil SAP556SB was built as a part of a modern upgrade to a phenomenal rifle series. It and it’s brethren are shining examples of firearms design excellence.

As for filling the role of EDC Carbine, truck gun, or any other close quarters personal defense weapon?

It’s an ACE of Spades.