A year or so ago, I worked with Houlding Precision to tailor fit a lightweight battle rifle to me. The company was just getting started transitioning from a precision agriculture focused machine shop into top shelf firearms. Yep, quite a switch. Houlding Precision has done well since then — very well. In fact ,they even make the billet receivers in an OEM relationship for a few notable companies including JJFU – Jesse James Firearms Unlimited. Under their own firearm label, they have grown and grown. Indeed, the last two years have been painful for them from a growth perspective just the way it has for other top tier AR-15 companies.

By the time I had Houlding build a battle rifle for me, I had purchased and built many custom AR-15 rifles, but Houlding had a different concept which delivered more of a tailor made rifle. A few months after our virtual fitting, I had in my hands what I still consider today one of my favorite and finest quality rifles I own. 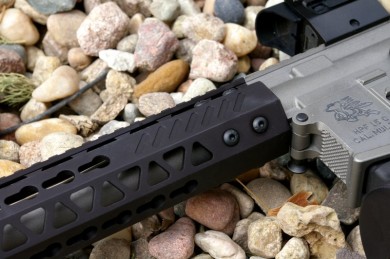 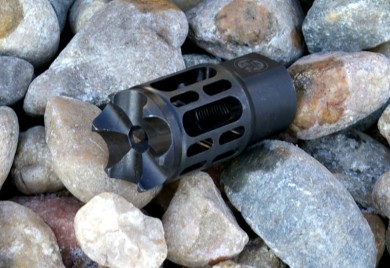 As far as I was concerned, my Houlding Precision was so perfect that I wanted to be buried with it when I die… no, really my wife and I discussed it. So, you can understand my reluctance when Todd Houlding asked that I swap out a few of the original spec’ed components with his new Houlding branded components for testing. I asked, “Why mess with perfection.” Well, the parts arrived anyway with a note politely requesting I give them a chance.

Houlding Precision, previously named “Houlding Kaufman Ironworks, Inc.” has been around for a while. In fact, the business was originally started way back in the late 1800’s and early 1900s by farmers who began repairing farm equipment; definitely a plowshares into swords story. Today the company is named Houlding Precision and focuses on producing the best custom tailored AR-15s available. 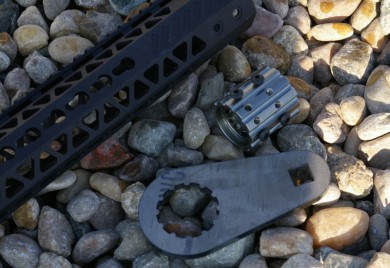 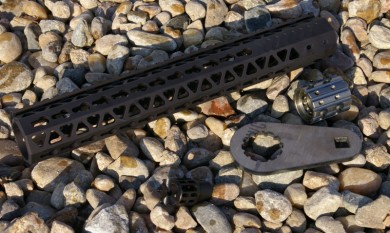 My original custom rifle I reviewed was so requested that it became a standard configuration in the Houlding Precision lineup called the HPF-15 Utility Battle Rifle, but with a few tweaks that many, including me, would argue are substantial upgrades. Instead of my original rifle configuration of Troy Alpha Rail with squid grip inserts, Daniel Defense bolt and barrel, Geissele Trigger, and PWS muzzle brake, Houlding’s current version features its own HPF CMX billet forend, Curse brake, and Battle Tested Equipment AR Match trigger with a choice of 16” or 18” Lother Walther match barrel. Mr Houlding politely asked if I could install and review the current version accessories on my rifle which were being offered instead of continually pimping a rifle he did not offer. How could I refuse such a nice request. 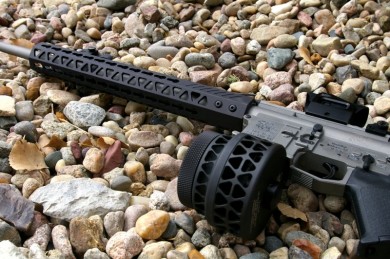 I made the forend and muzzle brake swap and what do you know, I now have a Houlding Precision HPF-15 spec rifle with the exception of the barrel, bolt and trigger, and I am actually even more happy with. The Irish Curse brake actually works better than the PWS model and is a little bit quieter for the shooter and shooters around you. I have tested the regular Houlding Curse brake and the shorter Irish Curse brake and I actually like the shorter version better. It still delivers a flat shooting rifle, but with less boom. The Irish Curse is a gorgeous part which has been nicely radiused and then Melonite finished. 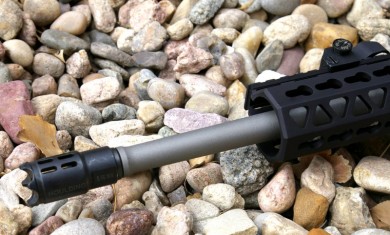 The idea of the Irish Curse brake was to mitigate recoil in the shortest possible length while also suppressing flash. The original dual chamber curse actually provides a huge amount of downforce but the Irish Curse has a little different porting and seems to do the same job in less space. Lower ports are angled at 60 degrees to prevent dust kick up in the prone position.

The only downside for me to move to the Houlding forend was it 2oz heavier weight than the Troy Alpha Rail. Not a huge deal considering the added features the CMX Forend delivers, such as Keymod slots at 90, 180, and 270 degrees, 13” or 15” lengths (I chose the 13”), longer and stronger barrel nut design over the Troy, and of course the very trick looking and exceptionally comfortable octagonal shape. The Houlding forend is a significantly stronger due to the design of the extended barrel nut. Honestly most of the weight increase is contained within the size and length of the nut. I do miss the Silicon Troy Squid Grips which provided a cooler handguard during high round count shooting, but the CMX actually seems to do a better job staying cooler longer than the Troy Rail.

From a comfort perspective, the Houlding CMX rail is far more comfortable than the Alpha rail due to the smooth exterior and beautiful triangular pattern. As you can see, I just had to plug in my X Products 50-Round skeletonized drum magazine with the matching triangle pattern.

Generally when I find something that works, I have a really hard time changing things, especially when it comes to an AR-15 that shoots extremely well and was for all practical purposes my perfect rifle. That noted, the new Houlding CMX forend and Irish Curse brakes were great upgrades in both comfort and shooting ergonomics as well as adding a bit more style in the process. So yes, you can make a perfect rifle “perfect’er” even though a grammar teacher just twitched that I typed that.

Though my original rifle was used as a prototype for the UBR-15, the new version has a few tweaks including a RCA Bolt Carrier Group, BTE match trigger and of course the match grade Lother Walther barrel. Houlding actually even has a new rifle which I have ordered called the Wraith which weighs in at an amazing 6 lbs if you want something a bit lighter. I have said it at least once before; the Houlding Precision AR-15 rifles are put together right, look great, and shoot wonderfully. One of the gems of the industry.