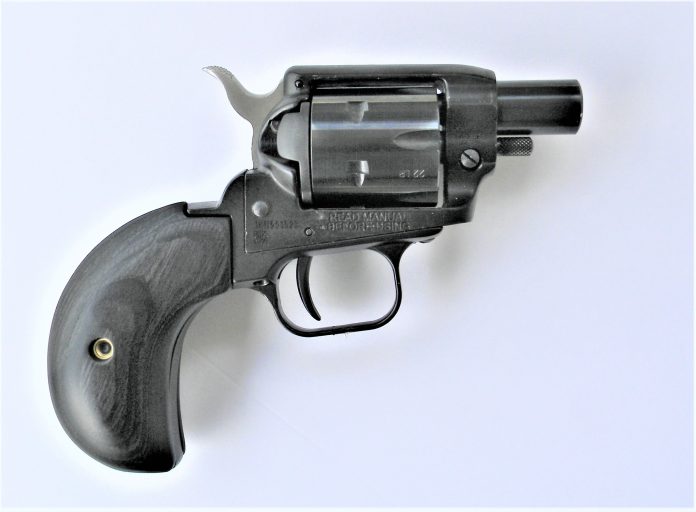 Heritage Manufacturing offers single action revolvers similar in style to Ruger’s Single Six, the Colt Scout, and many other single action rimfire revolvers. The Heritage revolvers are very affordable and never seem to give trouble. There isn’t a lot of stress on a rimfire handgun and non ferrous metals work perfectly well in this revolver. While GAT offers the best in tactical reviews sometimes you just gotta have fun.

The Heritage Barkeep is a short barrel birdshead grip pistol that is nothing but a lot of fun. This revolver is simply a bobbed barrel version of the famous Rough Rider .22. The Rough Rider Barkeep is similar to cut down single action revolvers popular in the Old West. Most were custom jobs until Colt finally offered the Sheriff’s Model. I would imagine based on research there were ten or twelve cut down revolvers for every factory short barrel Colt. Heritage revolvers give quite a few shooters a start in collecting. Collecting different variants of a handgun for the pure fun of it is a good thing. Don’t expect modern guns to appreciate much, if at all, but expect to enjoy the pursuit.

The Heritage Boot is also a short barrel birdshead grip handgun. This one takes the act to an extreme. The barrel is only one inch long and doesn’t have a front sight. Boot guns were often worn in the boot in a special holster or a simple rawhide thong type attachment. They were usually derringers but sometimes short barrel small bore revolvers. The Heritage Boot will probably never see service in this role but it is true to the theme. Like all Heritage Rough Rider handguns the Boot features a single action lockwork, must be loaded one at a time through a loading gate, and the spent cartridges are ejected in the same manner, one at a time. The hammer is cocked for each shot and the trigger does only one thing it releases the hammer. It does not cock and drop the hammer, hence the term single action. Unlike practically every other single action revolver the Heritage revolvers feature a manual safety. Due to the short barrel there is no ejector rod. A wooden handled tool is supplied to butt out spent cases.

The boot will be offered with engraved wood, gray pearl, and black wood grips. Other options are available from Heritage as custom grip options. These options are affordable and this is an easy gun to upgrade. The grip feels good in the hand. The firing grip is easily cupped in the hand. There is nothing quite like a single action revolver’s hand fit. The single action .22 will make for many pleasant hours of handling and shooting. Recoil isn’t a consideration. There is a simple groove in the top strap for sighting. Accuracy potential isn’t very high. I got about what I expected.

I began firing the Boot with Winchester Wildcat ammunition. I stood facing a man sized 7 yard target. With past experience with rimfire single action revolvers I knew the drill would not be to take my time and press the trigger slowly but to bring the gun up and snap shoot. I did so and found six shots in less than three inches in a group on paper. Next I fired a few groups slowing down to aim down the sight groove. It isn’t difficult to put six shots into two and one half inches. This isn’t very practical. The Boot is at its best in fast shooting, simply pointing the pistol and breaking a shot. It is just a stunt really. Just fun shooting. The best value of the Boot seems to be with shot shell loads. I tested the piece with both CCI and Winchester birdshot. Winchester patterned a bit better. Either load would shred an average reptile at ten feet or so. The Boot, then, has a specialized role that is useful. The Boot is simply a fun gun. I suppose it would do for defense against reptiles or as a fishing gun. Its real value is in fun shooting and playing cowboy.

I had a question concerning velocity with the 1 inch barrel. I was quite surprised to find that Winchester Super X 37 grain hollow points clocked 914 fps. That isn’t much different from a 4 5/8 inch barrel revolver. However CCI Stingers were at 780 fps. The Stinger is a great rifle load among the best for popping pests. The slower burning powder of the Stinger which is needed to ensure high velocity from the rifle didn’t do well in the Boot revolver. That’s ok as the piece is just for fun. Although it may see duty as a back pocket gun when I am whacking weeds with a machete or walking in snake country. I know if you see them they aren’t dangerous, it is the one you don’t see that get you. Just the same- the boot is a comfort and while highly specialized it is very inexpensive as well.