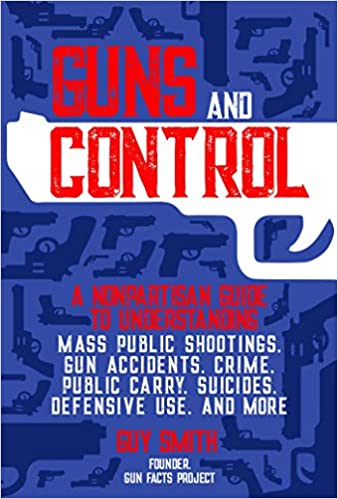 Guy Smith is a man after my own heart. He’s curious, doesn’t accept pronouncements of truth by authority, and digs deeper in order to prove it himself. His entry into the topsy-turvy world of contrafactual “research” by, shall we say, skeptics about guns parallels my own. We both moved from accepting popular disapproval of firearms in society, to wondering why, to making our own inquiries and analyses. We both discovered the truth is opposite: Firearms are an important part of American culture, are overwhelmingly safely, responsibly owned and used, and help protect more citizens from harm than they are involved in hurting them.

There are differences in his favor. Smith has been at this over 20 years and has developed an encyclopedic website called GunFacts. He posts everything he learns there (now with help from a dedicated group of volunteer researchers as the Gun Facts Project). I go back 10 years as an amateur–DRGO is a volunteer project run by practicing physicians. You can learn a lot from searching DRGO, but all that and more is on Smith’s GunFacts website, and better organized.

All those years and thousands of facts later, he has collected in Guns and Control everything you need to know about gun ownership and the efforts to weaponize research to justify restricting it. Its title precisely states the conflict we face, in this election year and every day. The activists who argue for licensing users, banning guns and other infringements on our natural, constitutional rights are primarily motivated by and depend on emotional arguments. Smith cuts through that and focuses on “Just the facts, ma’am.” The subtitle, A Nonpartisan Guide to Understanding Mass Public Shootings, Gun Accidents, Crime, Public Carry, Suicides, Defensive Use, and More makes that clear, though in too much a Table-of-Contents manner.

As he guides us through objective evidence on topics including the prevalence of firearms in the U.S., mass shootings, suicide and criminal use, carry and defensive uses, and accidents, we realize that the story is the same in each area. Guns are not the issue—how people use them is. Not how legal, knowledgeable gun owners do, but how they are used by the “murderer, rapist, bandit, gangbanger, or thug.” He presents salient comparisons between countries and cultures, which make it clear that custom and society determine the rates of violence of all kinds in different places.

In the penultimate chapter, he discusses perhaps the most important points in the book—the many ways in which research goes wrong, so often by anti-gun academics. Smith himself has “encountered hundreds of bad studies”, and new such ones each week.

Critical decisions are made in study design that determine the quality of data and the reliability of its sources, the choice of methodology (not that which leads toward desirable conclusions), the assumptions made in the analysis (which too often are personal beliefs of the author) and the variables examined in the work (but “correlation does not equal causation”). All of these are subject to bias on the part of study authors.

Smith and I agree, too, on the particularly abysmal work of medical and public health researchers on firearm violence issues. The subject is best evaluated by criminologists, with help from economists who understand cost-benefit analysis.

Smith has drawn tables and charts from numerous sources (and created many himself) that clearly illustrate the comparisons and trends he talks about. There are many ways to cast light into obscure, hidden methods of manipulating data, and he avails himself of all of them.

You can, in fact, find all this at the GunFacts website. But Smith’s book organizes and explains it so that you get an overarching picture of data being consistently manipulated in all realms of official antagonism toward firearms. And for those of us who like to hold information on a subject in our hands, books beat all. There will be plenty more bad studies coming to explicate, and Smith and the Gun Facts Project will continue doing so (as will DRGO). But at this moment in time, Guns and Control details for us everything we need to know.

Control is indeed the end game of anti-gun “safety” studies. Knowing how these researchers mold their work to that end is how we can reverse their impact on public opinion.

Read Guns and Control, reference it, share it. It is, as Smith states, “pro-fact and anti-B.S.” It’s the medicine firearm research  and society need today.