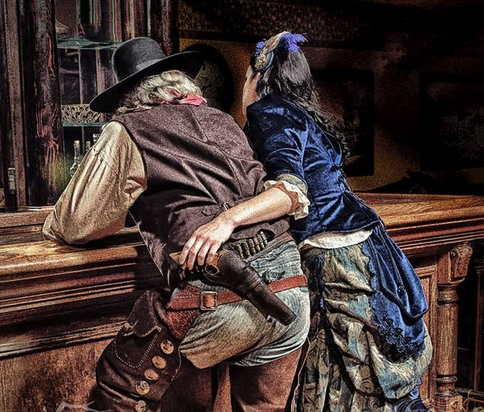 [Ed: Dr. Faria’s review, first published February 28 on HaciendaPub.com, discloses the reality that was more the Mild West than the Wild West. Lightly edited for DRGO.]

There is a serious misconception of the Old West that needs correcting. That is the notion of an uncivilized Wild West, where antisocial and violent behavior was the norm, and where citizens were afraid to leave their homes, afraid of rampant crime and in fear for their lives. This savage perspective turns out to be incorrect—false assumptions of the Old West based on sensationalist press, the Buffalo Bill Wild West Show of the 1880s and ‘90s, and subsequently cowboy shows and Hollywood movies. Bands of working cowboys and good citizens did not go about town in their leisure time challenging, outdrawing, and shooting each other in a systematized orgy of violence and gunfights as portrayed in the movies.

Bad men and violent outlaws did kill each other, but almost always left the good people of the towns alone. The famous gunfight at the O.K. Corral in 1881 in Tombstone, Arizona, in which Wyatt Earp, and his brothers, Virgil and Morgan, with Doc Holliday, killed three of the outlaw “Cowboys,” became a celebrated incident not only because of the unique circumstances but also because brother lawmen killed brother outlaws in a historic shootout. Even then it was newsworthy and certainly not a daily occurrence.

In his book, Gunfighters, Highwaymen and Vigilantes: Violence on the Frontier, historian Roger D. McGrath corrects the historic record with substantive scholarship. After studying the Sierra Nevada frontier towns of Aurora and Bodie, McGrath found that those mining towns, where audacious young men and gunmen roamed freely packing either Colt Navy .36 six shot pistols in Aurora or Colt double action “lightning” or “peacekeeper” revolvers in Bodie, were peaceful towns, except for the quarrels in the carousing and gambling saloons. Otherwise, both towns carried on well, and everyone not interested in whoring, drinking, and gun fighting were left alone.

True, the homicide rate was high among those carousing and looking for fights in the saloons, but in the rest of the populace, the old, the ladies, and those not willing to pick fights, homicides were rare. Likewise, robbery, burglary, and rape were rare. Murder was confined to the “drunkards upholding their honor.” The homicide rate for Aurora and Bodie were 64 and 116 per 100,000, respectively, compared to Washington, D.C., at 72 per year in the 1990s. Likewise, the burglary and robbery rates were 6 and 84 per 100,000, respectively, for Bodie; compared to 2,661 and 1,140, respectively, for New York City in 1980. The townspeople, although they might have carried guns, respected each other, and townspeople did not even bother to lock their doors at night. Similar observations have been made by other researchers studying the supposedly violent and crime-ridden Lincoln County, New Mexico; the Kansas towns of Dodge City and Wichita in the 1870s; and the Texas frontier towns from 1875 to 1890.

Returning to the issue of the possible confiscation of American firearms in the current era, consider the practical obstacles, not to mention the constitutional protection. Trying to blame, register, ban, and confiscate (one step usually follows the other) over 300 million firearms owned by Americans would bring about a tinder box situation, at least an order of magnitude worse than Prohibition, for Americans obey just and moral laws but not capricious or tyrannical laws, and a veritable police state would be required to enforce the draconian gun laws that would be necessary to carry that out.

Thus, politicians who sadly continue to use the latest tragedy (and the emotionalism and the passions elicited in its wake) to push for the usual round of gun control—while ignoring the accumulated objective research published in the social sciences and the criminological literature—are not sincerely lamenting the deaths of the innocent or sympathizing with their families, but attempting to score political points, political points at the expense of the victims or good citizens. They are also further polarizing America and tearing apart the fabric of this great nation by using emotionalism rather than common sense to bolster their unwise, political actions.

Let’s stop demonizing guns and end the shootings by incarcerating the criminals and identifying and healing the mentally ill, for much work needs to be done in the psychiatric and mental health arenas and in the task of reducing violence. Sensationalizing violence day after day by the press, the electronic media and the internet—heaped upon impressionable individuals subject to our increasingly dumbed down, popular culture and public education—is having a malevolent effect that needs to stop.