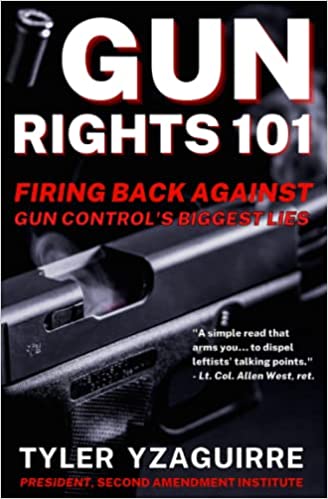 Gun Rights 101: Firing Back Against Gun Control’s Biggest Lies is a nice little book. That is a good thing, not faint praise. There are other books with the same purpose, to arm the reader with the facts about gun ownership and their proper use, notably Dr. John Lott’s Gun Control Myths and Guy Smith’s Guns and Control: A Nonpartisan Guide to Understanding Mass Public Shootings, Gun Accidents, Public Carry, Suicides, Defensive Use and More. But these are longer, denser, and dive deep.

Gun Rights 101 hits the high points clearly and succinctly. Yzaguirre covers 40 “Big Lies” in 40 pages, with one or several “Fire Back”s that counter them. It’s perfect for the newly interested gun owner and advocate. Yzaguirre hits the high points of controversies in just a paragraph or two of accurate, easily communicated information that can be just as easily passed on by the reader to others. I wish I’d thought to write it. (If I had, I’d have expanded the Table of Contents to note each of the 40 lies so that each could be turned to directly.)

Tyler Yzaguirre is the founder and president of the Second Amendment Institute, a non-profit advocacy and legal foundation in the Washington, D.C. area. It is the newest of the set of activist pro-RKBA organizations, founded in 2016. The Institute worked with Dick Heller on Heller v District of Columbia (“Heller II”), in which the Supreme Court struck down four egregious obstacles to ready gun ownership in the District in September. Through its project Students for Self-Defense, SAI also recruits college students on campuses nationwide for pro-rights activism. In September, SAI hosted its annual Defending Freedom Action Summit in Richmond, which Yzaguirre likes to call “CPAC for the younger generation.”

[Full disclosure: I know Tyler and, despite the “younger generation” moniker, was a speaker at the DFAS. SAI is a growing organization with fresh energy and, as in other pro-2A organizations, I am a life member.]

I found I might respond differently to some of the arguments he covers. For example, about the falsehood that “States with more guns have more gun crime,” his comments don’t show how state-by-state or national statistics contradict that. And I’m skeptical that as many as “0.98% of legally owned guns were used in violent crimes” even in Texas. This isn’t supported by the footnoted reference, and conflicts with data I know.

There are near 400 million guns in the United States, where over 1,200,000 violent crimes occurred in 2019 (the latest year the FBI reports). That yields a much lower proportion, 0.3% if each crime were committed with a different gun. But in reality it is even far lower for two reasons: The great majority, 72%, of violent crimes aren’t even committed using firearms, and so many, perhaps 48% of violent crimes and up to 85% of urban firearm homicides, are committed by gang members reusing the same guns.

However, the point of this book is not to arm the typical new pro-gun enthusiast with masses of hard statistics. It is to provide easily grasped responses to common anti-gun tropes–and indeed, the comebacks are all relevant, concise, and effective.

The second half of the book is a thorough review of the 21st century’s two seminal Supreme Court Second Amendment decisions, Heller and McDonald. Heller confirmed the Constitutional right of individuals to “keep” arms and McDonald “incorporated” (extended) that right to the whole USA beyond the District of Columbia. Yzaguirre summarizes how these cases came about, the arguments presented, and what the decisions meant to the RKBA in much more (but very readable) detail.

This is a useful addition to the literature, falling between the plethora of articles describing each decision but much handier a than full-on academic book length treatment of them. And it’s timely, as we await SCOTUS’ decision in Bruen v New York State which should clarify the “bear” portion of our “right to keep and bear arms.” Let’s hope to see that case added to the book in its next edition.