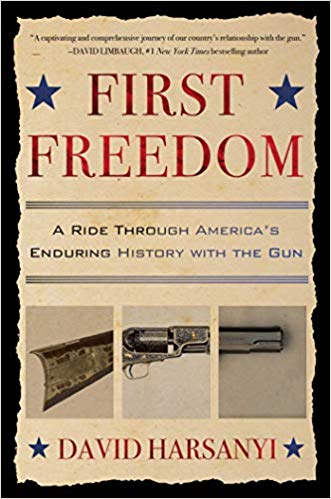 David Harsanyi published this book last fall. No reviewer could better describe it than its own subtitle: A Ride Through America’s Enduring History with the Gun. It’s thorough, and it’s almost breakneck in the best ways possible.

If you are interested in anything firearm-related during our past 500 years, it’s here. And that naturally incorporates most things globally about firearms, since so much of their technology has been invented, borrowed (and stolen) across borders during that time.

[Full disclosure: David Harsanyi’s day job is as Senior Editor of The Federalist, and he writes regularly for National Review. So we know his head is screwed on right, pun intended.]

Harsanyi begins at the beginning, with what may have been the earliest technical innovation to improve upon thrown projectiles: the sling. This was in due course succeeded by the bow and arrow, kicking off the technological arms race that has led to today’s Kalashnikov and AR-15 style arms (not to mention bazookas, grenade and handheld rocket launchers). There is brief mention of China’s discovery of the formula for gunpowder and Europeans’ development of the handheld gun preceding their settlement of the New World. But once you turn page 11, buckle up.

As with most inventions, the elite originally controlled the means of production and use of these unreliable, dangerous to use, completely inaccurate fire sticks. English common law developed to be supportive of the right of most citizens to own firearms, once the kingdom’s fights over religion and aristocratic control wound down. But these precedents, good and bad, came overseas during the colonization of North America and, literally, touched off the American Revolution.

Black powder is dangerous to store in quantity, so despite general ownership and use of guns on the frontier, communities kept stores somewhat apart, in strong masonry buildings. The British and the rebels realized simultaneously the importance of securing these “magazines”, and the result was the fateful march on Concord and Lexington.

Although massed firepower remained the rule in Revolutionary warfare, Americans’ special skill at marksmanship came into play with the first organized regiment of sharpshooters, General Daniel Morgan’s “Kentucky Riflemen”. (Can you hit a 7 inch plate at 250 yards with iron sights?) Though they were few, and did not truly win the war, they did confound the enemy and helped protect troop movements. One of them was probably the first specialist sniper known to history, Timothy Murphy, who took out British General Fraser and helped win the Battle of Burgoyne in October 1777. This reversal of fortunes got America taken seriously by European powers, not least the British—and led to the alliance made in 1778 with France that won the war.

The “Brown Bess”, a .75 caliber smooth-bore musket, was the primary gun of the Revolution for both sides. It was only useful to 80-100 yards, apart from mass fire which is how it was mostly used. The American long rifle was highly accurate but took twice as long to reload. Both were flintlocks, an improvement over the original matchlocks of the Pilgrims, but still not weather proof. Correcting these deficits becomes the story of the next 200+ years of firearm development.

All the luminaries and their advancements are here:

But even more interesting are some lesser known heroes of American firearm development:

Those who used firearms through our history are not neglected. The direct descendants of Timothy Murphy and the Kentucky Riflemen of the Revolution were Hiram Burdan’s  1st United States Sharpshooters in the Civil War. He shot out the right eye of the head of a figure of Jefferson Davis at 600 yards, standing. After the war, the standard Springfield Model 1863 muzzle loaders were converted by Erskine Allen’s company to become breech loaders. These Model 1873’s were the guns that started winning the West.

Andrew Jackson dueled, earning respect from many rough-hewn Americans. “Wild Bill” Hickok was renowned for amazing (and deadly) shooting, according to his rule “Be sure and not shoot too quick.” “Buffalo Bill” Cody hunted his namesake on the plains with his Sharps rifle. Annie Oakley earned her repute as one of the most astounding marksman or woman of all time. Then, the warriors: Alvin York in the First World War and Audie Murphy in the Second, and every American who’s carried a gun into battle before, then and since.

The final chapters of First Freedom focus on the political era of the fight for gun rights versus gun control, with much about the development of the modern NRA. Many of us will already be familiar with these years and their conflicts. They are an inherent part of the story of guns in America, although perhaps less intriguing than the development of the tools and mechanisms so well described.

Regardless, if you are interested in the people, ideas and processes that fostered the development of firearms in the United States; if you are interested in the growth of technology and manufacturing through our history; or if you are curious about the politics that has always pervaded the attempt to create better, easier to operate, more efficient and more economical firepower—you will be fascinated by Harsanyi’s work. Buy it, read it, enjoy!