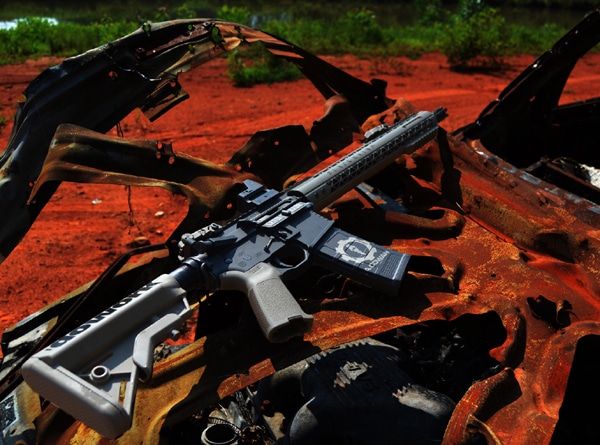 Today COWAN! is going to talk to you about a BRO rifle – specifically the Black Rain Ordnance Fallout 15. COWAN! has been abusing the weapon for a rifle now and he seems to like it. Read the review below to find out why, and to see how he came to that conclusion. Mad Duo A hard look at the Black Rain Ordnance Fallout 15 COWAN! These days there are more AR manufacturers than there are reasons to not see Nicholas Sparks movies. Just like a good AR, there may be a reason to check out the new Spark’s Something, Someone in the Rain but we have been getting along just fine with The Bodyguard as our go-to reliable watch-with-women movie. Mainly because of the Kitchen Fight Scene….but also, that was the hardest analogy I’ve ever tied together. Because there are so many great rifles out there, any new AR manufacturer is going to have a lot to prove. The market is full of weary buyers and the internet crowded with trolls. Black Rain is a young company, hitting the market in 2009 in a room so crowded with beards and black rifles that trying to set themselves apart from the competition was no easy task. Well, when you build a quality rifle it won’t take long for the right kinds of people to notice, but for the average shooter who is looking for a home defense or range rifle, is a Black Rain Ordnance* rifle worth the above average scratch you have to save to get one? Black Rain sent me a Fallout 15 to test, and that’s exactly what I intended to find out. *Note: Black Rain Ordnance is commonly referred to with the acronym “BRO” which could go either way depending on how you feel about flat brim hats and Affliction T-shirts.

First things first, Black Rain Ordnance is headquartered in Neosho, MO. Billet uppers, lowers, barrels, rails, trigger groups, brakes, compensators, charging handles and control groups are all made under the same roof to offer a degree of consistency and fit not offered by many other manufacturers. That is impressive. So, knowing I had what could end up being an awesome rifle or a finicky range queen arriving for review, I planned my tests to reflect not just hard use, but realistic hard use. I could easily throw the rifle in a wood chipper or shoot at it with lesser, more jealous guns but that wouldn’t reflect the use and abuse it would see in the majority of hands. No, for me the testing focused on hard use, rifle accuracy and general spec testing. As always, the rifle was pre-treated with lubricant; in this case Snake Oil Prime from All Star Tactical, before the test began. Some might want to see a rifle run without lubricant though my opinion is that any rifle that will run hard without lubrication probably has tolerances so loose that its accuracy will be dismal (there’s a barracks joke in that last sentence if you look hard enough). My settled round count for the test was 2000 rounds without additional lubrication or cleaning. The 2000 rounds (in order) was comprised of: Wolf Polyformance 55 Grn (1100 rounds) PMC 55 Grn (400 rounds) Speer Gold Dot 64 Grn (100 rounds) Fiocchi 55 Grn (200 rounds) Lake City SS109 62 Grn “green tip” (200 rounds) The rifle I was sent came adorned in desert tan. (That might also be coyote tan or non-permissive-hyper-violent-dynamic-unicorn-killing-tan or whatever the cool operators are calling it these days.) It had Black Rain’s 3.5 LBs single stage trigger installed, Magpul MBUS sights and modular rail. I also installed a B5 Systems SOPMOD stock because I prefer it over the supplied Magpul CTR. Standard features are the familiar AR fair except for a user-adjustable low-profile gas block, NIB-X bolt carrier group and an enlarged charging handle latch. While I was tempted to tune the gas system to my preferred “sweet spot” I decided to run the entire test on the factory setting; I was not disappointed in that decision. That 3.5Lbs BRO trigger? Easily one of the best triggers I’ve ever had the pleasure of pressing; minimal pre-travel, a crisp and light wall, distinctive break and very, very slight reset. It breaks consistently, without awkward wobble or spongy return and allowed me to regularly see splits in the .15-.18 range (with plenty .13s). An experienced AR shooter would have little problem putting out a 30 magazine in under 5 seconds and working to under 4 seconds wouldn’t be too great a challenge. So sure, the gun can be fired fast. Obviously important for practicing Dynamic Pie Concepts drills, but how does it fair for accuracy? This rifles recoil pulse is obnoxious in the way that the Super Bowl would be if it was the Seattle SeaHawks against the Denver Broncos…well, awkward….moving on….. Minimal muzzle rise, and not so much shouldered force that the rifle resists being driven back to your desired point of aim. Shooting paper I could drive a full magazine of head shots from 15-35 meters in 4 to 6 seconds. On steel, a 10×10 plate could be serviced from as far out as 50 meters with a full magazine in well under 10. When talking distance, it seemed almost like cheating to hit a 10×10 plate in the kneeling at 300 meters with 5 rounds in under 10 seconds. User skills apply, but the 223 Wylde double fluted stainless barrel certainly helps. If you do your part, the Black Rain rifle will take care of the rest. So how hard do you push a rifle? Well when testing the “spec” of a rifle I use as many different magazines as possible and try to induce malfunctions through different shooting positions and by forcing the rifle to make contact with the environment. For this test I used Gen1-3 Magpul Pmags, Surefire 60 round magazines, Brownells, C Products, HK (steel), Troy polymer, and a few Gen 1 USGI OKay products magazines (black follower). I liberally used each magazine as a monopod when in the prone, braced the rifle on all manners of barriers and ran the gun hot enough to get the rail temperature up to 250+ degrees. Through the first 1100 rounds of wolf I waited for a malfunction that didn’t come. I had a handful of ammunition malfunctions, but not a single malfunction that could be attributed to gun or magazine. Reloads were always smooth and all controls functioned precisely. Drop testing (and resisting the urge to do push-ups after I dropped it) during cool down periods did nothing to change the performance or affect tolerances. When I hit the 1500 round mark I gave it two hours submerged in pond water. With the amount of carbon built up in the rifle after 1500 rounds, the introduction of water was sure to gum things up. It didn’t. From the pond (allowing excess water to drain) the rifle fired from first to last round. Changes in ammunition did nothing to affect the performance into the 1600 round neighborhood, Speer Gold Dot fed reliably and the groups were sub-MOA. Let me say that again; at 1600 rounds the Black Rain was still shooting sub-MOA. I did not see my first malfunction until I broke 1700 rounds. Between 1700 and 2000 Rounds the Rifle experienced 3 double feeds; twice on C Products aluminum magazines (Magpul followers) and once on an Okay Industries aluminum (black follower) magazine. Each malfunction cleared quickly and without further issues. The cause was excessive carbon build up around the extractor, a problem I corrected by simply rutting out the area with my finger; total fix time, about 10 seconds. The last 200 rounds of the test I focused strictly on accuracy. Once again the rifle continued to group consistently for precision and practical accuracy. My initial zero was a 50/200 meter zero, I allowed the rifle to cool to ambient temperature and then fired 3 5-round groups at 50 meters from the prone (allowing for cool down time between). Pictured below is the worst of those three groups. Then I got the gun hot; pushing the barrel up to the modest 170 degree (f) range and fired an additional 3 5-round groups. Pictured is the worst of those groups. At the end of a 2000 round test I don’t have much negative to say about this rifle other than the fact that I don’t care for the supplied rail (and I refuse to wear an Affliction T-shirt). It offers little space for attachments and almost forces the shooter to use a single-point sling. While this is a minor furniture issue, it does become an issue when rail temps break the 150 degree range and there is no method of attaching rail covers. For 3-gun or posing for bearded operator pictures I think this rail is best suited, though for patrol or home defense use of a different Black Rain rail would be preferable. My final impression is that the Black Rain rifle is worth the money. There are less expensive rifles out there, just as there are more expensive but Black Rain offers a quality that is consistent with their price. For long service life, reliability and consistency, this rifle should be at the top of your list. Sure, you may have to cut back a bit on dancing mom support, but it’s going to result in a rifle that puts a smile on your face like no Nicholas Sparks movie ever could. COWAN! Afterword from the Duo: If you’re looking for someone to watch in lieu of Sparks, as COWAN! alludes, maybe check out the feature films of R.J. Kizer. How Hell comes to Frogtown went without winning an Oscar or an Emmy or a Tony baffles us.

About the Author: Aaron (Breach Bang COWAN!) is an idiot savant of the tactical variety from a little place we like to call Hotlanta (though apparently no one from down there calls it that). COWAN! is the Lead Instructor and HMFIC of program development for Sage Dynamics who believes every article should be roughly the equivalent of a doctoral thesis. To call him thorough would be to damn him with faint praise. We call him COWAN! because anything in all caps with an exclamation point after it must be awesome. A former infantryman turned PSC contractor and LEO, COWAN! has served in several SWAT and training billets. His company, Sage Dynamics, is a reality-focused firearms and tactics training company that provides practical instruction for the civilian, police and military professional. An identical twin whose brother went on to become Agent 47, COWAN! is the author of the novel Rushing Winter and the designated fluffer on the set of numerous training videos, including the really good one here.