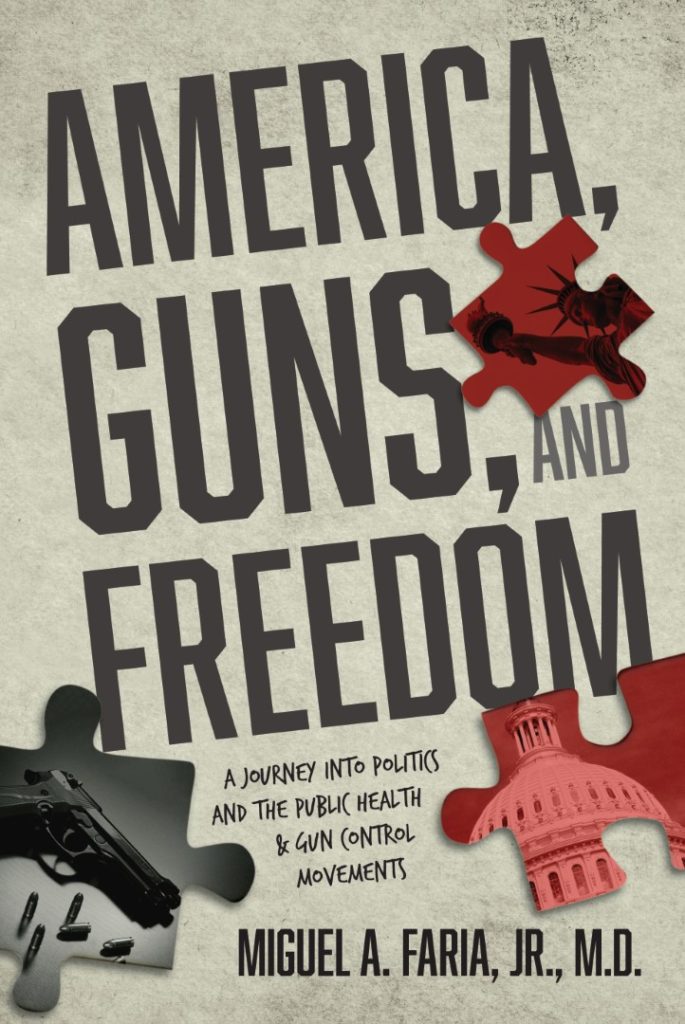 Let’s be up front—America, Guns and Freedom is a bait-and-switch job. This brand new book (released TODAY on Amazon, Barnes & Noble, and via all good booksellers) is not just A Journey into Politics and the Public Health & Gun Control Movements. It is far broader than that—which is all to the good. Its 377+ pages are chock full of the people, the events, and the fights that have been waged for decades against Second Amendment deconstructionists and for political freedom at large.

Fully disclosing, Dr. Faria is a friend of mine and of DRGO—you often see his byline here. He has been in the forefront of opposition to the public health/anti-gun complex since the 1990’s. And he has quoted our Dr. Wheeler, me and other DRGO stalwarts liberally in his book.

You can read more of Dr. Faria’s impressive resumé elsewhere. Apart from excellence in neurosurgery, he bravely challenged organized medicine’s gun hate when he founded the Georgia Medical Society’s Medical Sentinel in 1996, and published gun truths as its editor-in-chief for 6 years—which was enough for the GMS. He continues to do so writing for his own site HaciendPubishing.com and others, and as an associate editor-in-chief of the journal Surgical Neurology International.

Faria how he and DRGO founder Timothy Wheeler, MD, late criminologist and civil rights attorney Don Kates, and William C. Waters, IV, MD (then of Doctors for Integrity in Policy Research) testified before the Labor, Health and Human Services Subcommittee of the U.S. House of Representatives’ Appropriations Committee in 1996. The result was that the Centers for Disease Control has been forbidden ever since by the Dickey amendment to propagandize for gun control, as it had blatantly been doing. This conflict is the meat of the beginning of the book’s narrative.

But understanding America, Guns, and Freedom: A Journey into Politics and the Public Health & Gun Control Movements starts with Dr. Faria’s own journey. He and his family lived through the destruction of thriving Cuban society by Fidel Castro’s revolution, which “thrashed [everything] into the infamous cesspool of collectivism.” But their suffering culminated in escaping to the United States–penniless, grateful and highly motivated.

His dedication to the values of a free society of individuals rather than fidelity (my pun intended) to the state marks everything Faria does and says. Critically for modern America to grasp, he tells the stories of registration and disarmament that enabled the 20th century tragedies of the Weimar Republic’s descent into Nazism, the Warsaw ghetto’s hopeless self-defense, the Soviets overrunning Hungary, as well as Cuba’s helplessness versus communism. I’d add the genocide and expulsion of the Armenians from their ancient homelands before, through and after World War I to this list. There are even more modern stories that fit, like Cambodia and Rwanda.

Yet he points out counter-narratives too, as in the success of armed civilian militias in the Philippines and Guatemala during the 1980s. Today, the United Nations’ Small Arms Treaty threatens societies worldwide that accept it, requiring registration and regulating international firearm commerce. The United States Constitution still protects Americans against such internationalist interference—if it is respected.

He dissects every gun control issue in American history, though focuses on his own witness beginning with 1986. That’s when Arthur Kellerman, MD kicked off the war by claiming that having a gun in a household increased the odds of a family member’s dying by gunshot by 43 times! As we know, it turned that neither his use of “in the household”, nor “family member”, nor “homicide” nor any other term was accurate or properly evaluated. Even Kellerman’s own downward revision in the 1993 to 2.7 times was still fallacious. Now that some 30% of gun owners decline to reveal their possession to unknown surveyors, anti-gun “researchers” are as unable to document patterns of firearm ownership as they are unable to recognize the vastly greater lives (and injuries and property) saved by defensive gun uses annually.

But that doesn’t stop them. One of their repeated ploys is to conflate adolescents and young adults as “children” in order to play on our sympathy. But those “child victims” 14 and older should not only be an order of magnitude more responsible ,but are largely involved in drug and gang shootings.

Faria elucidates the many faults in most official medical publications’ data manipulation. These extend from presenting simple statistics as science, claiming cause and effect for mere correlation, ignoring confounding variables, refusing to share raw data for confirmation, the “ecologic fallacy” and, always, blaming a tool instead of the people who wield them for the violence they commit.

“Ecologic fallacy” was a new term to me, referring to when “complex analytical techniques are combined with large data sets involving general populations extending over long periods of time.” In other words, they dazzle us with statistics when the study is so grandiose that it is actually impossible to draw precise, justified conclusions. That is, there are too many variables to boil down, inherently including too many potentially confounding factors to account for.

Do we ever hear established “public health experts” address the enormous, calculable benefits of civilian gun use? Do they recognize that violence overall has declined as dramatically as permissive carry has expanded? Do they understand that National Instant Background Check System denials are nearly all false positives, while NICS is a sketchy, hole-ridden tool itself? Do they have any grasp on how blunt force trauma can be as or more deadly as gun and knife attacks? No.

Do they know how important the word “Equalizer” is for women, the elderly and minorities? Do they have any concept of the righteousness of justified homicide? Do they know that legal gun owners, and permitted carriers of guns, are far more law abiding than even police, let alone the general public? Of course not.

Faria diagnoses their followers, fairly I think, as having a “passivity disorder akin to Dependent Personality Disorder” in which participants see risks as problems for others to protect them from, avoiding accepting agency to deal with threats themselves. We should not equate this attitude of the preferentially blind and helpless with the personality disorders that infect many violent criminals. But one can think of their sociopathy and psychopathy as the countervailing, prevailing force to those who would disarm and leave the populace defenseless. Serial and mass killers are more extreme version of them.

Faria suggests “Mass Shooting Derangement Syndrome” as a disorder needing urgent study, but I’m afraid that goes back down the road of pointing to guns rather than people. Every mass shooter is deranged, either sociopathically (doesn’t care about others given his own goals) or psychopathically (actually enjoys the pain and horror he causes). If they can’t do it with guns, they do it with explosives (Oklahoma City), trucks (Nice, France), airplanes (9/11), poison (Tokyo) or any other of a thousand other ways.

He has a great deal of valid criticism for the failings of our mental health system since the deinstitutionalization of chronically ill, poorly adjusted and less than capable psychiatric patients since the 1970s. Faria also points to the growth of political terrorism of all sorts, and to the increasing urge by maladapted individuals to seek meaning in notoriety and infamy. He easily debunks the myth of the Old West as territories terrorized by non-stop gunfights, when the greatest role of firearms was their use by citizens to suppress outlaw violence.

The importance of a capable, armed citizenry is evident to all who take out the beams in their own eyes and look at all the evidence. (My metaphor, not Dr. Faria’s.) Rising violent crime in Great Britain and Europe tells the tale of their increasingly restrictive gun control laws, even to forbidding self-defense.

Meanwhile, besides our generational drop in crime rates with vastly increasing numbers of civilian guns (including millions of those rarely implicated, widely reviled “assault rifles”), he pulls out interesting local examples to be considered. In 1966 in Orlando, Florida, firearm training was offered to women, resulting in a significant decrease in the incidence of rape. In 1982, Kennesaw, Georgia legislated that every household must be armed. Not every one did, of course, but even though this was a political statement by townspeople who already believed in arming themselves, crimes of all sorts dropped (or continued to drop). We’ve never seen the blood bath among legal gun owners that is constantly predicted by ignoramuses.

Quibbles? . . . just a few. There are glossy pages of very relevant pictures and diagrams midway in the book. Unfortunately, the diagrams are too small to make out their content in the detail they deserve. And very few images are referenced in the text where they obviously pertain. You’ll find a few odd phrasings here and there, but Faria is a skilled writer so only obsessives like me may notice.

Exceeding expectations, there is a very thorough index in the back, which will make this an excellent reference given the scope of his survey. His sterling use of historical quotes to begin each chapter brings the wisdom of our greatest thinkers into immediate relevance.

America, Guns, and Freedom wraps up with conclusions we know, but which have to be emphasized over and over in order to penetrate contemporary American discourse:

Let’s conclude with several of those spot on quotes:

John Locke wrote that “he who would take away my Liberty would . . . take away everything else.” Consequently, in Supreme Court Justice Joseph Story’s words, “The right of the citizens to keep and bear arms has justly been considered the palladium of the citizens of a republic.” As a result, Abraham Lincoln recognized that “. . . as a nation of free men, we will live forever or die by suicide.”

We can add Dr. Miguel Faria to the list of thinkers whose hard won wisdom we should follow, perhaps not in such pithy terms, but just as meaningful.