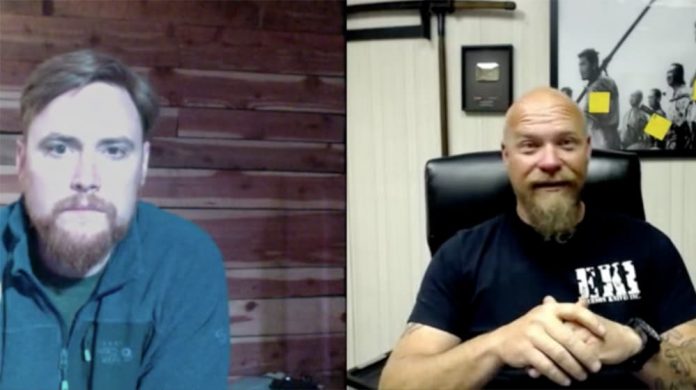 Those of you that have followed The Arms Guide since its beginning will know that we advocate taking advantage of training opportunities. Some time ago, I began a series featuring various firearms instructors. Recently, I had the opportunity to interview Mr. James Yeager.

James is the founder, owner, and CEO of Tactical Response.

He’s known for his protective security details in Baghdad Iraq, his service in a wide variety of law enforcement roles, his prolific You Tube videos, and various TV and movie roles— most recently in the film “Daylight’s End.”

So without further ado, I’ll post a summary of my interview with Mr. Yeager and embed the video for those of you that would like to hear the whole thing. Below, I’ve paraphrased my questions and Mr. Yeager’s responses, but I encourage you to watch the video to hear our conversation in its entirety.

Your bio is full of interesting stuff, but it’s way more interesting for you to talk about your story than for me to read it to folks. What do people that read this article and/or watch this video need to know about you?

I enjoyed shooting .22 pistols and rifles growing up.

I’m half Scotch Irish and half German, which explains my propensity for violence but not my lack of alcoholism.

(By the way, me too. Norris on my father’s side and Schultz on my mother’s.)

I started shooting IPSC in the early 90’s before IDPA was invented. I’m not a natural shooter but picked up a lot of tips from more experienced shooters during my formative years as a gun handler. I bought a gun magazine and bought a Ruger P85 Mark II because it was on the cover. I didn’t realize there would be a best gun ever on the cover of the magazine the next month. I got up to B class with that gun.

I worked undercover for four years and made over 3,000 felony dope buys and sales during that time. Later I did patrol, SWAT, and K9 work. I have a love-hate relationship with law enforcement. I love it, and it hates me.

I started my training company in 1996 while I was still a cop. In 1999, my wife drew my attention to the fact that I made more as a trainer than I did as a police officer. Finally, I decided to focus on the training business.

I’ve popped around the globe a few times doing some protective work…Baghdad and stuff like that.

Since 2002, the mainstay of my life has been doing firearms training.

Could you walk me through a training path that you’d recommend for someone that knows nothing about self defense or guns and wants to become proficient/ capable?

You won’t hear this much, but I think someone could get by with just taking one class. They could take Fighting Pistol and then practice those principles. Obviously, more training is beneficial. I’d recommend Fighting Pistol, our scenarios class with simunitions (The Fight), and our medical class.

Really, someone could learn everything that we teach on their own given enough time and ammo. We provide some short cuts, hacks, some cheat codes to expedite the training process.

I enjoy watching your videos. I hear you make a distinction between the gun community and gun culture quite often… can you talk about that? What makes one a part of the gun culture from your perspective?

I hope this show is R-rated. Yeah, the gun community is a bunch of F #*@%$#, boot licking, liberal, aholes…

Whereas the gun culture (of which I am a part) is unapologetic in our exhibition and use of the second amendment.

We don’t try to pacify liberals.

We speak our minds, are not p.c., and stick by our principles.

It’s great to see the way you involve your children and grandchildren in your business and life.  Is legacy important to you?

Obviously, it would be great if one of my grandkids took over my training company someday, but it’s way more important to me that they know who I am and have my principles passed down to them. I think my legacy will be my philosophy on training. I hope that sticks.

You strike me as someone that has purpose behind the things you do… someone that has a specific code of ethics… I may be wrong, but I’m guessing that you’re someone who has a relatively specific idea of what makes a “good man.” What’s your idea of manhood?

A man should be honest, reliable, punctual, generous, caring, compassionate, and hard-working.

It kind of boils down to integrity, really.

Outside of your training school, where do you think everyone ought to train?

Everyone provides something. Training is kind of like putting together pieces of a jigsaw puzzle and taking the good pieces from everyone you train with. I would prioritize training with Clint Smith, John Farnam, and Ken Hackathorn while you can.

What advice would you give to the prospective student to keep them from wasting their money or time training. What are tell-tail signs of bad instructors or schools?

Train first, buy gear later. Borrow a gun and take a class then buy a gun as an educated consumer.

Look at the instructor’s resume before training.

How important is it to you that a firearms trainer has personal experience in defensive scenarios? Can someone become a good instructor by simply taking a ton of instruction?

Yes. Someone doesn’t have to have been shot at to be a good trainer.

Often we hear that from trainers who have been shot at in attempt to position themselves as gurus on the top of a mountain.

What are your favorite movies, foods, music, pastimes, etc? Rather than me asking you twenty little questions, mention what interests you and talk about that, if you would.

I really liked the new movie Logan. Our family’s Christmas movie is Die Hard. My wife and and I enjoy watching the standard gun guy shows in the evenings: Breaking Bad, The Walking Dead, Sons of Anarchy, etc.

I’m going to list a few words; would you pick one or two and say whatever you want to say about that subject?

Here are some highlights from Mr. Yeager’s comments on this word association list, but you need to go watch the video (at least this section).

Really, you need to go to the video and listen to Yeager’s comments about these subjects; it’s worth your time.

Who was the most influential person in your life that’s no longer with us?

That’s hard, I’ve been so fortunate to have so many people who’ve had a positive impact on my life. As crazy as it might sound, I think I would have to say my high school art teacher.

I really enjoyed getting to talk with James Yeager and thought his comments were not only entertaining but quite instructive. I’m planning a trip to Camden to take Fighting Handgun at Tactical Response, and I’ll follow up with you afterward. 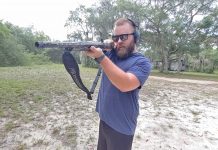 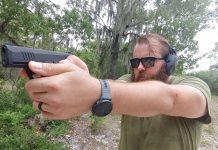