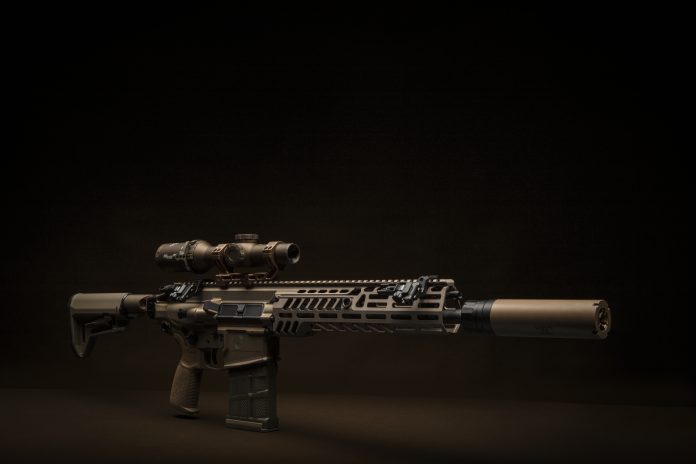 The announcement went out late last night, the MCX SPEAR is now the XM5 Rifle, likely to become the M5 Service Rifle with the US Army. The rifle will be evaluated by the Marine Corps as well, although no official announcement of concurrent adoption has been released as of now.

The battle rifle is back. A new generation of Squad Automatic Weapon, select-fire and with a greater effective range, is coming with it.

There is still a chance, as their always is with military procurement, that this drys up after this contract and the US Military sticks it out with the M4A1. I don’t feel that in this one though. Not like the XM8, not like the SCAR and 416 either, the change here feels more permanent and it has to do with the caliber.

The new 6.8x51mm ‘Fury’ ammunition, with its high velocity in a fairly short 13″ barrel, is a true shift in the capabilities of the infantry rifle where the other examples were merely more efficient (and more costly) designs without anything additionally gained in effective range or energy. We’ve maxed out 5.56 NATO with MK 262 MOD 1, we can’t get much more out of that round or M855A1. Physics. The new 6.8x51mm offers a much more physics optimized package than the 7.62 or 5.56 NATO. This efficiency jump, with the range and terminal performance, is what separates the NGSW from its 5.56 “M4 replacement” predecessors.

In chats with Sig Sauer, the SPEAR rifle was pretty much done when the NGSW rolled around. They were already building the MCX’s larger iteration to chase agencies, units, and individuals who wanted the MCX in 7.62 NATO or 6.5 Creedmoor. The real development stretch was the new ammunition the US Army wanted. Lightening the case by using less brass and a steel base, which also strengths the rim for extraction, also allowed them to crank the pressure up to 80,000 psi.

It worked in prototype well enough to be selected. Now we will see what it will do en masse.

WASHINGTON – The U.S. Army announced the award of a 10-year firm-fixed-price follow-on production contract to Sig Sauer, Inc for the manufacture and delivery of two Next Generation Squad Weapon variations (the XM5 Rifle and the XM250 Automatic Rifle) and the 6.8 Common Cartridge Family of Ammunition.

This award was made following a rigorous 27-month prototyping and evaluation effort that included numerous technical tests and Soldier touch points of three competing prototype systems.

The value of the initial delivery order on the contract is $20.4 million for weapons and ammunition that will undergo testing. The contract includes accessories, spares and contractor support. It also provides the other Department of Defense services and, potentially, Foreign Military Sales countries the opportunity to purchase the NGSW weapons.

The XM5 Rifle will replace the M4/M4A1 carbine within the close combat force, and the XM250 Automatic Rifle is the planned replacement for the M249 Squad Automatic Weapon

Both weapons fire common 6.8 millimeter ammunition utilizing government provided projectiles and vendor-designed cartridges. The new ammunition includes multiple types of tactical and training rounds that increase accuracy and are more lethal against emerging threats than both the 5.56mm and 7.62mm ammunition.

NEWINGTON, N.H., (April 20, 2022) – SIG SAUER is honored to be awarded the Next Generation Squad Weapons System (NGSW) Contract by the U.S. Army after a rigorous 27-month testing and evaluation process.

“The U.S. Army is taking a bold step toward command of the 21st century battlefield and SIG SAUER is immensely proud to be the selected provider for this historic revolution in infantry weapons. The fielding of the SIG SAUER Next Generation Squad Weapons System will forever change the dynamic of military engagement for America’s warfighters with American innovation and manufacturing,” began Ron Cohen, President and CEO SIG SAUER, Inc..

The SIG-LMG lightweight belt-fed machine gun and SIG MCX-SPEAR Rifle are purpose-built to harness the energy of the SIG FURY 6.8 Common Cartridge Ammunition enabling greater range and increased lethality while reducing the soldier’s load on the battlefield.  Both the SIG-LMG and MCX-SPEAR deliver significant weapon and technology advancements to the soldier and provide a solution for battlefield overmatch in comparison to the current M249 and M4/M4A1.

The U.S. Army’s procurement of the NGSW System marks the beginning of an era where combat weapons are coupled with a suppressor as standard issue equipment.  The SIG SLX Suppressors are designed to reduce harmful gas backflow, sound signature and flash.  SIG SLX Suppressors feature a patented quick detach design for easy install and removal.

“We commend U.S. Army leadership for having the vision to undertake this historic procurement process to deliver a transformational weapon system to our warfighters.  This award is the culmination of a successful collaboration between SIG SAUER and the U.S. Army, and we look forward to the continuing partnership,” concluded Cohen.

SIG SAUER is a company that is driven by innovation and we are proud to offer the advancements of the NGSW System in the SIG 277 FURY Hybrid Ammunition (the commercial variant of the SIG 6.8×51 FURY Ammunition round), SIG MCX-SPEAR Rifle, and the SIG SLX Series of Suppressors available to the consumer.  For more information about these products visit sigsauer.com.

About SIG SAUER, Inc.
SIG SAUER, Inc. is a leading provider and manufacturer of firearms, electro-optics, ammunition, suppressors, airguns, and training.  For over 250 years SIG SAUER, Inc. has evolved by blending American ingenuity, German engineering, and Swiss precision.  Today, SIG SAUER is synonymous with industry-leading quality and innovation which has made it the brand of choice amongst the U.S. Military, the global defense community, law enforcement, competitive shooters, hunters and responsible citizens.  Additionally, SIG SAUER is the premier provider of tactical training and elite firearms instruction at the SIG SAUER Academy.  Headquartered in Newington, New Hampshire, SIG SAUER has over 2,900 employees across eleven locations.  For more information about the company and product line visit:  sigsauer.com.