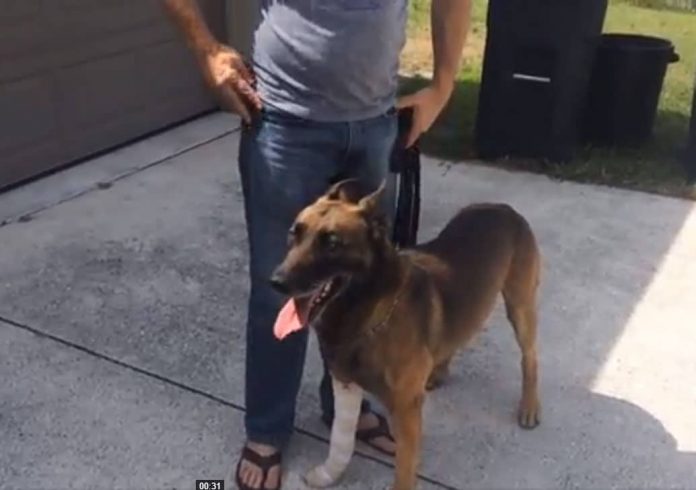 A retired police K-9 is recovering after being bitten by an alligator outside of his Palmetto, Florida, home last week, but trappers believe after the dog was bit, he bit back.

Chris Leister was in the yard with his 7-year-old Belgian Malinois, Arek, when he heard him tussle by the water. He said it caught his attention since Arek wasn’t typically one to play in the water. Soon thereafter, he heard a yelp and knew something was wrong.

“He comes from behind the bushes and he’s got this big rip and tear on his paw,” recalled Leister, who formerly worked with Arek at the Palmetto Police Department.

Leister looked over and saw the alligator’s head sticking out of the water. Leister described the gator as really big, an estimated seven to eight feet, but apparently his neighbors have seen the creature lurking around before and say it’s closer to nine feet.

Leister rushed to the animal hospital to get medical treatment for Arek, who is expected to make a full recovery.

Trappers were called to the property, but were unsuccessful in finding the alligator. Leister said they think Arek bit the alligator back because otherwise, the trappers do not believe the gator would have let go quite so easily once it had a grip on Arek.

Dr. Dana Walstad, from the Ellenton Animal Hospital where Arek was treated, said it is breeding season for alligators. She said Arek is a “very lucky dog” and could have easily been injured much worse.