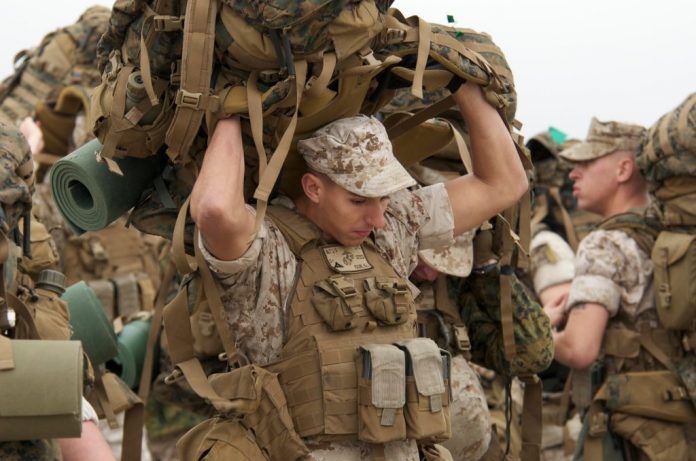 It’s the mental debate every war fighter has before departing for a mission, every hiker has before stepping off on a journey, and every camper has as they pack their bags: how much can I carry and still be as effective as I need to be? At what point is the extra weight of our gear doing more harm than good?

Well, according to research conducted by Marine Corps Captain Courtney Thompson at the Naval Postgraduate School (NPS), the number is lower than you might expect. The baseline for most combat operations is set at 43 pounds–which is the standard weight of the flak jacket, kevlar helmet, and other combat necessities, meaning any long-term survival gear has to tacked on to that number. According to Thompson’s research, combat effectiveness starts to really suffer after adding just 15 pounds to that combat load.

“Marines always have to be prepared to engage with the enemy,” said Thompson. “In doing so they typically have personal protective equipment, weapons and other gear. Ultimately, the goal is to make those Marines as lethal and survivable as possible, and my thesis works towards that same goal.”

That figure falls dramatically shy of the loads many Marines are tasked with carrying in combat, which regularly exceed 150 pounds and can, at times, climb up above 200 for those tasked with manning larger weapons systems. As a result, Marine Corps officers are required to carry 152 pound packs for nine miles at a twenty-minute-per-mile pace in order to complete the Marine Corps Infantry Officer Course–a physical challenge that has seen more vocal criticism in recent years.

Unfortunately, despite Thomspon’s findings, it seems unlikely that anything will change for infantry Marines in the near future. Current combat loads are based on mission requirements, so until ways to reduce the weight of existing gear are found, things are likely going to remain heavy. That isn’t to say the Corps isn’t paying attention, however. Thompson was awarded the Stephen A. Tisdale Thesis Award by the Naval Postgraduate School Department of Operations Research (OR) for her efforts, and according to the Captain, her work isn’t stopping here.

“The commanding general of the Marine Corps Warfighting Lab is asking for my research and results,” Thompson said. “I also worked with a few people at Marine Corps Systems Command who’ve been looking at this problem specifically so they may use it to help support their further research.”