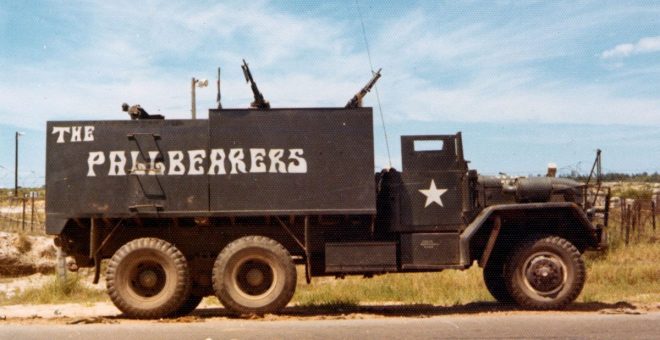 While Hollywood would tell you everything moved by low-flying helicopter in Vietnam, the hard fact of life was that it was road-bound truck convoys that schlepped the bulk of the food, fuel, and ammo to American and allied units stationed around the countryside. However, these predictable routes soon became obvious targets for enemy ambushes.

One of the worst supply runs was that along Route 19, some 150 miles of winding nowhere that became known as “Ambush Alley” for the motor transportation guys having to make the drive. It was not a new problem. Back when the area was still called Indochina, the French had a 3,500-man unit — Mobile Group 100 — largely annihilated over the course of a week as it passed along the same road.

The American response? Hit the scrap piles. Using salvaged steel, sandbags and anything else they could find, up-armor Deuce and a Half and later five-ton trucks. Then, they’d pile on whatever ordnance they could mount.

Note the collection of M60s and improvised armor plate which started at quarter-inch steel and grew from there.

In some instances, this ran all the way up to entire M113 armored personnel carrier bodies. Like this: Generally, M113 APC hulls aren’t carried on the back of trucks, but the Gun Trucks weren’t your average grocery getters

While these gun trucks look right out of the biggest post-apocalyptic films of today, they predated those movies by generations – and in many ways are better than anything the big screen has ever come up with. While they most commonly bristled with M60 machine guns and M2 “Ma Deuce” .50-cals were popular, quad .50 Maxson M45 and M35 mounts known as “meat choppers,” which dated back to WWII, were always crowd pleasers. Johnny Cash’s 1969 hit Don’t Call Me Sue was evidently popular with the crew of this Gun Truck’s mount.

How about this gun truck of the 23rd Infantry Division, which mounted a quad M35A1 .50-cal set up dubbed the “Paris Peace Talks.” As everyone knows, if one .50 cal is fun, a quartet is a fiesta!

Then, of course, there were M134 Mini-Guns borrowed from helicopter gunships, which are always good for breaking up ambushes from guys whose ballistic protection was only as thick as a set of black pajamas. How about that M134 on the back to discourage disreputable merchants and ward off road rage at 6,000 rounds-per-minute

Richard Killblane, the longtime Transportation Corps historian, notes in his 98-page history of Army convoy operations, the firepower amassed by these teenage soldiers set to scrounging included a little bit of everything.

Gun trucks also carried a variety of “ditch guns” in the event the enemy approached so close that the gunners could not depress the pivot-mounted machine guns enough to engage it. The loose weapons ranged from shot-guns and M-79 grenade launchers to extra M-60 machine guns stored on the filler material in the space between the double walls. Since many ambushes occurred in the mountain passes, the crew had every weapon available to respond in case the enemy advanced below the depression of the main guns. The M-79 was one of the drivers’ favorite weapons. It provided hand-held artillery.

Of the estimated 100 or more gun named gun trucks that plied the highways of South Vietnam, only a handful was believed to have made it back home to the states — including The Widow Maker, The Colonel, and The Eve of Destruction. Today, Eve is on preserved and on display at the Army Transportation Museum at Fort Eustis, Virginia.

One of the best documentaries on these trucks is Heavy Metal Truckers, which runs about 10 minutes and is available below. Since you came this far, take the time. It includes several interviews with the drivers and gunners that were there and lived to tell the tale.

Further, if you want to go really far down the rabbit hole, Vietnam Guntrucks has messages and personal accounts of those who served in these amazing vehicles — as well as a gallery of 20,000 photos.