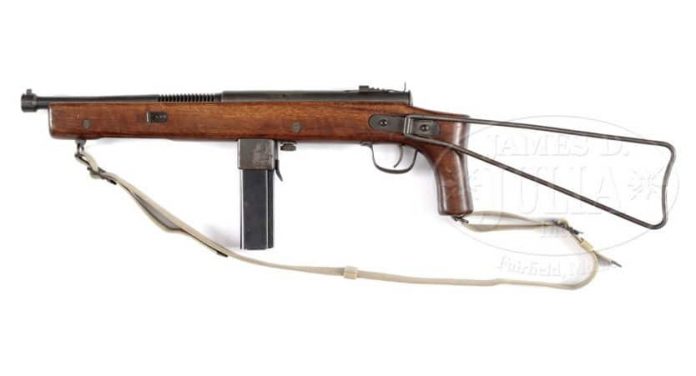 When people think of American troops in World War II using machine guns they think of the iconic Thompson M1 Sub Machine Gun, or the Browning Automatic Rifle (BAR), but many people forget their was an earlier attempt at fielding machine guns in the early part of the war. The Reising Sub Machine Gun Model 50 with its fixed wooden stock and the Model 55 with its side folding wire stocks were early attempts to outfit U.S. troops with a small portable submachine gun that fired the .45 ACP cartridge. Despite the fact it cost less than half of the cost of a Thompson M1 to manufacture due to a series of unfortunate design issues it was largely a disaster for it’s manufacturer Harrington & Richardson and quickly deemed by both the War Department and units using them as not effective or safe for field operations. In fact by 1943 most all of the entire run of both the Reising M50 and M55 were relegated to state side use only.

Beginnings of the Reising

In 1938 with the German Nazi State seizing land in Austria, Bohemia, Sudetenland, Moravia and all of Czechoslovakia the world knew World War was inevitable and weapons manufacturers began to work overtime on projects and designs that they hoped to sell to foreign governments. Harrington & Richardson of Worcester, Massachusetts was no different and began to finish development of what would eventually become the M50 Sub Machine Gun. H&R gunsmith and namesake of the gun Eugene Reising had once been an assistant to John M. Browning and had a hand in helping develop the M1911 pistol and the .45 ACP cartridge. Eugene Reising knew the future of the submachine gun platform laid in the .45 ACP cartridge but felt that a cheaper, lighter alternative to the M1 Thompson would be the key to his company making a fortune on military contracts. In March 1941 after more than two years in development the H&R Reising M50 was turned down by the U.S. Army during field trials at Ft Benning, Georgia but accepted by the Department of the Navy for use by the U.S. Marines. The Reising M50 won a  contract and the weapon was purchased for use as a “Limited-Standard Weapon”. At the time the Department of the Navy was facing massive shortages in their inventories of M1 Thompsons and needed guns and needed them quickly.

The Reising in both the M50 and recently developed M55 folding stock variants were both pressed into action by both the 1st Marine Raiders in their assault of Tulagi & Tanambogo and by the 11,000 Marines of the First Marine Division in their invasion of Guadalcanal. Almost immediately the harsh environment of the Solomon Islands began to show the problems with Eugene Reising’s design of the sub machine gun. The design although cheap to produce was much more complex that many other guns and used much tighter tolerances during it’s production. The early form of a delayed blowback recoil system used small part that found themselves extremely susceptible to sand, grit and volcanic ash that was present in nearly every island in the Pacific Theater of Operations.

The complaints from Marine units in the field came in almost immediately and a series of temporary fixes were tried in order to increase the reliability of the gun. The standard 20 round magazine which was often times cited as one of the major issues with the gun, was downloaded to 12 rounds in an effort to increase reliability, the magazine was such an issue that later models featured a single stack redesigned magazine. In reports from the field the gun was accurate but not reliable and as we all know, weapons that don’t operate aren’t useful for anything other than decorations. In combat non functional weapons lead quickly to non functional people holding them, or the guns getting discarded, which was largely the case for the Reisings.

These issues were not just some back channel urban myth, in fact the Marines quickly lost so much faith in the gun that Famed Marine Major General and Medal of Honor Recipient Merritt A. Edson while commanding the  1st Marine Raider Battalion ordered all of his troops to toss their Reisings into an alligator invested rivers and swamps then switched back to the bolt action Springfield M1903 pattern rifles. I don’t care how you slice it, that’s a big decision for anyone to make, but the gun was putting lives at risk, and that is unacceptable to matter who’s doing the fighting.

Aftermath of Solomon Campaign for the Reising

The disastrous campaign for the Reising in the Solomons didn’t spell the end for the Reising Sub Machine Guns, it just meant that they were to be used in environments where they wouldn’t see the elements they saw in the South Pacific. The gun when cleaned routinely was accurate, lightweight and reliable and cheap. This made it ideal for troops on the home front to guard enemy prisoner of war camps, and more urban policing type environments. The United State War Department however did send some amounts of these guns to our allies in Canada and to the Soviet Union under the Lend-Lease Act. In my research I thought that maybe that information was wrong, until I found a photo of our hen ally “Boris” posing in the snow with a Reising M50 with his Red Army hat and star featured prominently in the photo. I guess in a World War when you are being invaded, anything is better than nothing.

Legacy of the Reising M50

The legacy of the Reising M50 is a short one filled largely with problems and undelivered promises. It’s interesting that a man like Eugene Reising who helped John Browning with the development one of the most durable pistols every created in the M1911 and calibers in the .45 ACP managed to drop the ball on this design. The Reising continued in production in a semi automatic version known as the M60 until 1957 when it was finally retired. In all my years in and around firearms I have actually only seen one Reising and that was an M55 at the Evergreen Air & Space Museum in McMinnville, Oregon.

The M55 was on display as part of an exhibit entitled “Marine Invasion of Okinawa”, I actually got into a debate with the curator and explained to him that it was dam near impossible that the M55 would have been used from 1 April 1945 -22 June 1945 during Operation Iceberg. I tried to explain to him the history of the Reising and he was rather resistant to the possibility that his display was incorrect. Not my most shining moment but I personally think that if you are going to honor the men who served in that theater and in particular that invasion you owe it to their memories to represent them with the correct gear. Call me a purist.

Hope you enjoyed this look into a some of the lesser known firearms and history of World War II. We are hoping to showcase a few more weapons from both the Axis and the Allies that are either rare or were outright failures. It’s important for people to remember that firearms development, especially during times of conflict can have both amazing and tragic results.