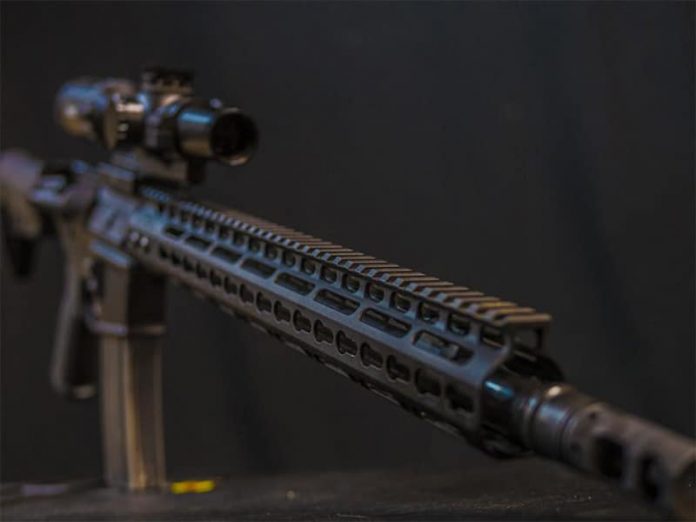 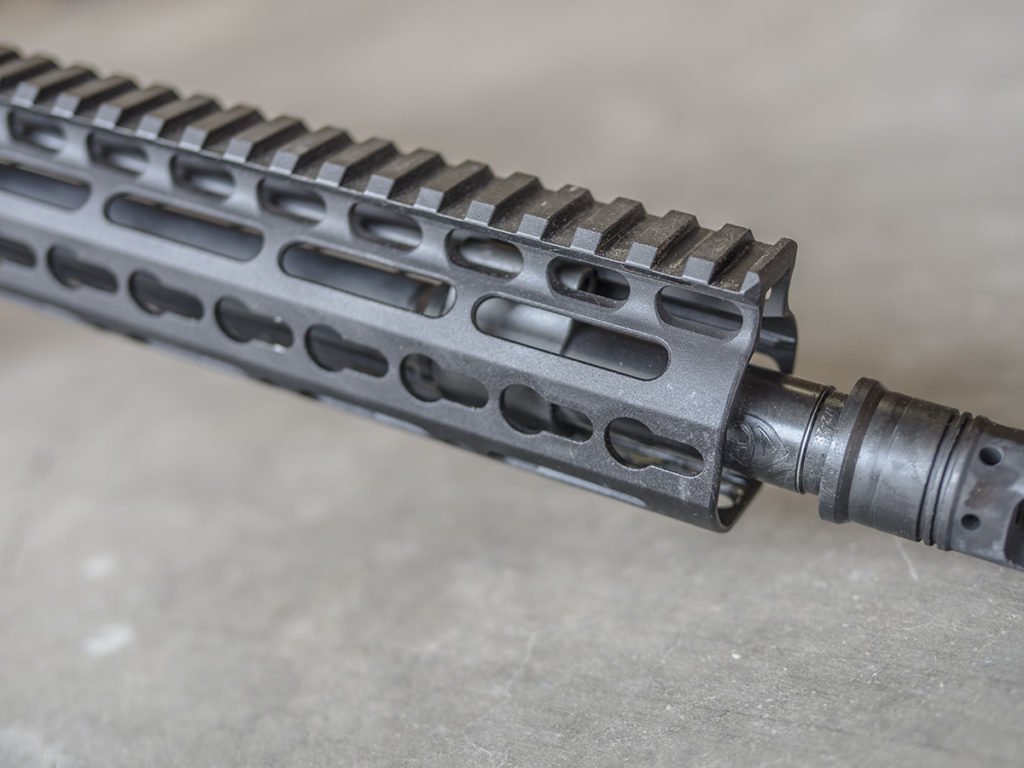 Incredibly well. The long rifle length gas system is a smooth recoil impulse and is designed to work with mil-spec lowers / mil-spec components. The Romeo barrel from Dynamic Defense Inc. is 16 inches long, features .223 wylde chamber with a 1:8 twist, and sports a Melonite finish. The 1:8 twist is a particular favorite of mine as it suits the typical weight of rounds I’m sending down-range. Speaking of down-range, this thing is very accurate. Firing at a target at 100m utilizing a Steiner Mx5i 1-5x optic I averaged 1.9 MOA groups with reloaded ammunition. I’ve no doubt this rifle could do better with a better shooter, trigger and optic. Dynamic Defense states the barrel can do 1 MOA or better and I have no reason to doubt them based on my experiences. The Melonite finish is a favorite of mine as well, as I’ve experienced excellent wear resistance and performance from these finishes. 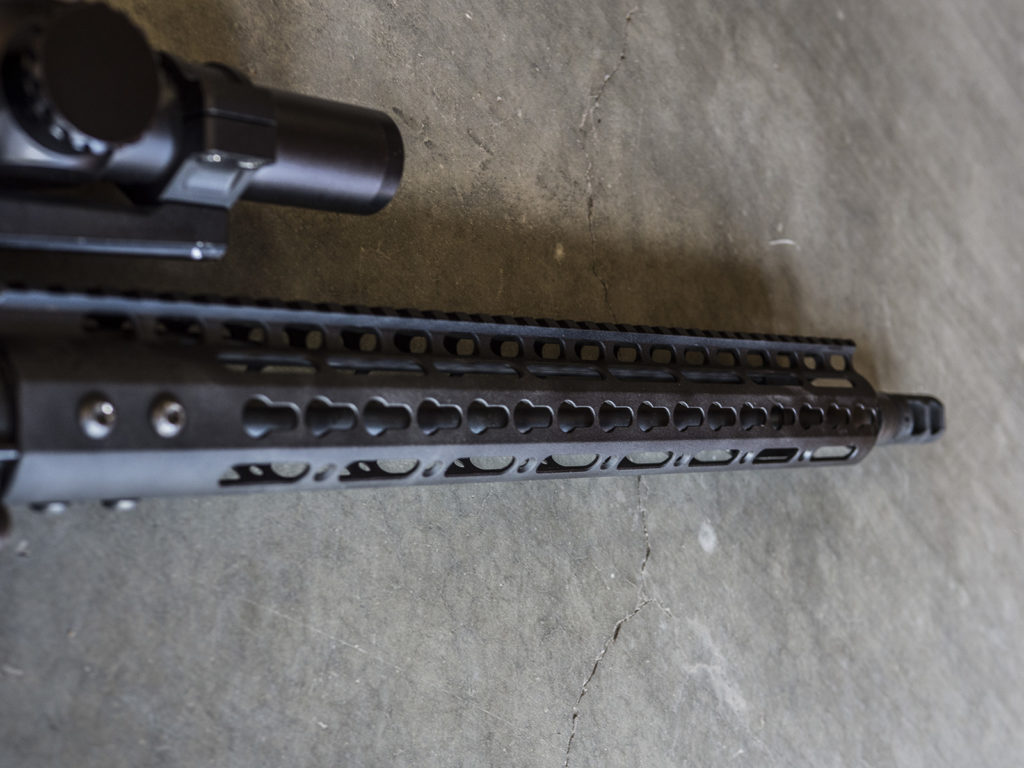 The recoil is near negligible. Follow up shots are as fast as what I do with my MK18 but the difference is that I don’t have to try nearly as hard. Because the recoil impulse is smooth and more gentle I fight the gun a lot less through it’s recoil cycle compared to carbines with shorter gas systems / barrels. With more time behind the gun I’ve no doubt that my split times will continue to fall. The recoil impulse feels somewhere between a 20 inch M16A4 and a 16 inch mid-length which given the hybridization between the two makes sense. Nothing feels quite as soft as a 20 inch barrel with a rifle length recoil spring. However, Pairing the Romeo upper with a lower outfitted with the Vltor A5 system (essentially a rifle length gas spring) made for a game winning combo. Pulling the trigger and sending rounds on target is almost like firing a 22LR. 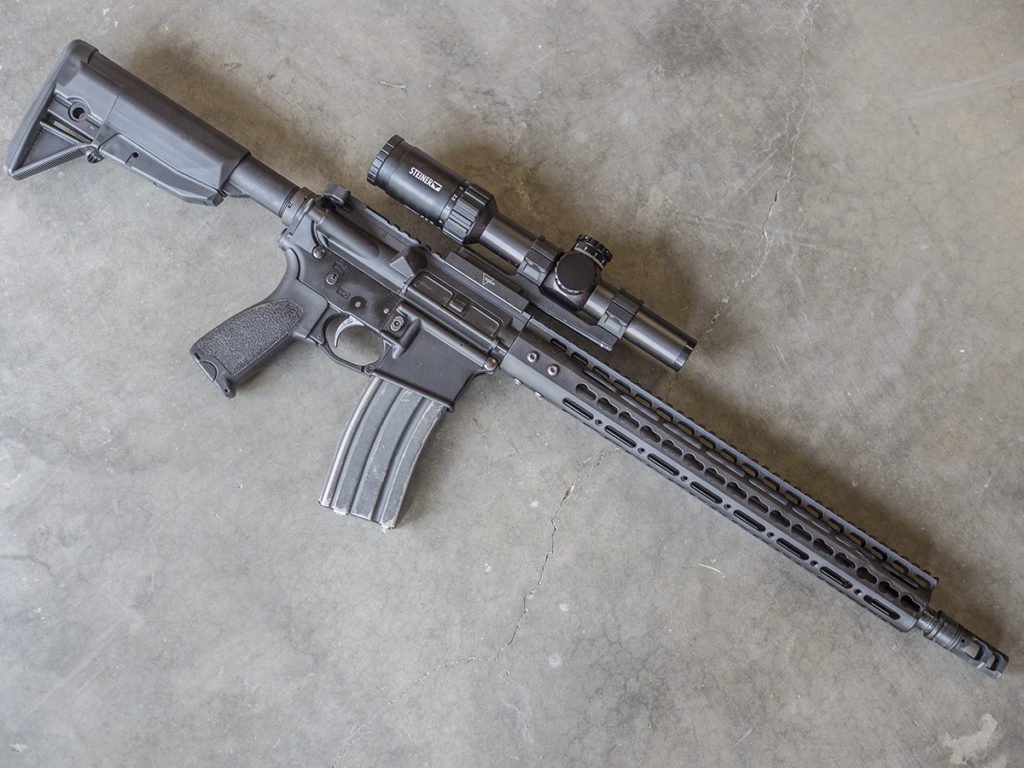 When I received the barrel I was worried about a couple of things. Because the gas block is so far down the barrel dwell time and reliability could have been a problem. However, Dynamic Defense opened the gas port to .075″ which has allowed me to shoot all factory ammo with no problems. The gas port was not opened so large as to cause problems with over gassing. The gas port was opened just enough to ensure reliable function but not so much that it makes shooting unpleasant. To date I’ve fired 1200 rounds with no malfunctions. I’m not claiming that I ran a reliability test, but merely stating that the upper has been utterly reliable in my time with it.

If you’re looking for something different and want to see how soft shooting a rifle you can get, the Dynamic Defense Romeo barrel is a fantastic option. Good materials, design, gas system, twist rate and a lifetime warranty makes for an excellent combo. The Romeo barrel will run you around 299 bucks. Dynamic defense also offers an upper assembly service for 99 bucks.